Pokémon OCG’s next dual set Time Gazer and Space Juggler is set to launch in Japan next Friday, April 8 and ahead of this date the entire collection of regular cards in the set has been revealed.

From the Time Gazer side of the set, fans can find two of the new VSTAR-type Pokémon. These are Hisuian Lilligant and of course Origin form Dialga. With the card type making its return in this set, you can also get VMAX Machamp.

Space Juggler will feature its own VMAX card as well. This time its Heatran, alongside two new VSTAR cards, Origin forms Palkia and Kleavor. 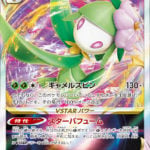 Alongside these cards, there are plenty of other popular Pokémon from the Hisui region, including all three starters and their evolutions. Hisuian Arcanine, Growlithe, Sneasler, and Wyrdeer, are also included, as well as legendary Pokémon like Jirachi, the Lake Trio, Darkrai, and more.

Today’s cards reveal only include regulars, not any of the secret rare cards that will likely be revealed next week in the days leading up to the set’s launch.

For those in the west looking to collect these cards, some will join the upcoming May TCG set Astral Radiance alongside other cards from the Battle Region OCG set. You can check out the full list of new Pokemon cards revealed today on PokeBeach here.