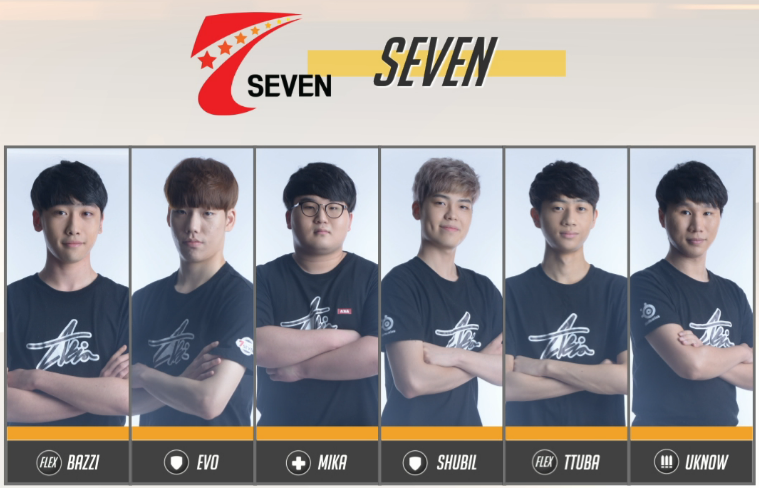 A distinct pattern has developed in Apex Challengers. Since the second season of OGN’s secondary Overwatch league, a notable team of new talent has emerged, and once they qualify for Apex, they can immediately establish themselves as a world class team.

The Meta, now known as Meta Athena, had us convinced they were going to run a royal road and win Apex in their debut season. Following in their footsteps, X6-Gaming burst onto the Korean amatuer scene to dominate Challengers, and earn their way to the following Apex quarterfinals. And now, after just two matches, LW Red have already locked in their quarterfinal spot for the current season.

While it’s still early in the fifth season of Challengers, the six players on Seven are already making a compelling argument that they will be the next team to continue the pattern and make their mark in Overwatch history.

Not their first rodeo

Named after their title sponsor, Seven PC Cafe, this roster wasn’t finalized until July with the addition of DPS player Shin “Uknow” Yoon-ho. Despite being a new roster of relatively unknown talent, their ambitions were high, and they had their eyes set on qualifying for Apex.

Step one was to win the Korean Open Division, a tournament whose winner would automatically be given a place in Apex Challenger. In the round of 32, Seven smashed their group 4-0 in order to qualify for the offline playoffs.

Both of Seven’s quarterfinal and semifinal matches were played on LAN against teams that are now in Challengers with them. The new environment didn’t phase them, as they defeated both teams with ease, dropping just a single map to Bon’s Spirit Gaming.

Seven were clearly a cut above the other amatuer teams, and not even the added pressure of a live audience stopped them. The Open Division finals were held in the same studio where the Afreeca Starleague takes place—an arena where legends of Korean esports have done battle. The spectacle and extra pressure weren’t an issue as Seven swept Bucheon NPlus 4-0.

With step one complete, Seven moved on to their next task—making top four in Challengers. They are currently in the middle of that campaign, but the early results are overwhelmingly positive. The first two matches against Bon’s Spirit Gaming and CHG were both 3-0 sweeps in their favor.

Seven is now, interestingly enough, on a seven-series win streak. It may seem easy to dismiss their results because they aren’t playing against established talent. But there are distinct qualities to their play that prove they have well established, and unique, strategies while the flashy highlights speak for themselves.

There is an I in Winston

One of the most notable aspects of Winston’s kit is his ability to maneuver around a teamfight. He can leap into the enemy backline to cause disruption, and moments later soar to his own backline to aid his allies if need be. Seven’s main tank, Lee “Evo” Yu-Seok, doesn’t seem to be aware of this, however.

While many Winston players jump backwards and forwards with the ebb and flow of a teamfight, Evo almost exclusively jumps forward. His playstyle focuses on punishing the enemy Zenyatta for any tiny mispositioning by landing on their head and zapping until dead.

Evo’s almost overly-aggressive style means he absorbs much of the enemy backline’s time and damage. That damage would normally easily be enough to kill him as he jumps into the enemy Discord Orb. And if his team were running the standard Zenyatta, he would be out of range for Orb of Harmony’s healing.

But that’s where one of the team’s flex players, Park “Bazzi” Jun-Ki, steps in. Compared to most support players, Bazzi plays a disproportionately high amount of Ana for the current meta. The range and raw output of Ana’s healing allows Evo to dive much harder than Winston players are generally able to. Combined with the fact that Evo is the primary Nano Boost target, he’s completely enabled to play a selfish style.

None of this means that the support players of Seven are less protected. The team’s captain, Kim “Mika” Young-Jun, who is the Lucio player, stays with his support partner and uses his speed and boop to keep them alive. What’s interesting, however, is that the non-Lucio support duties are shared between two players.

Two is one, and one is none

The trend these days in roster building is to have two dedicated supports, two DPS players, and two tanks with maybe one flex player in place of a tank. These roles are not rigid of course. We’ve seen DPS players play tanks in the triple tank meta, and supports play Sombra. But we can’t think of another team that has actively traded off roles between two players.

Seven lists both Bazzi and Lee “TTuba” Ho-Sung as flex players. Bazzi’s top three heroes are Ana, McCree, and Widowmaker, with a healthy share of Zenyatta and Soldier 76 to back that up. TTuba was primarily a Genji player (who flexed to Zenyatta when Bazzi played hitscan), but lately he’s picked up Doomfist.

While Bazzi certainly plays the lion’s share of support, both are quite skilled at being both a support and DPS. Each player definitely shines brightest as a DPS player. And quite often, Seven exploits the fact that they have three quality DPS players, and play single support compositions with just Mika on Lucio.

Mostly used while attacking, these compositions from Seven are brutal. They fully commit to diving the defenders with Winston, D.Va, Tracer, either Genji or Doomfist, who are all supported by Lucio. All the while, Bazzi is in the backline as Widowmaker, removing his enemies’ heads.

Within one map, Bazzi can smoothly transition between highlight Widowmaker plays, and single-handedly removing enemy Pharahs from the sky as Zenyatta. His skillset is reminiscent of Ryu “Ryujehong” Je-hong from Lunatic-Hai—primarily a support player who can, when needed, pick up McCree and tussle with the best in the world.

The exceptional combination of raw talent and versatility makes Bazzi a star player for Seven. What makes him even more incredible is that he’s just as effective, despite recently taking a backseat, playing less DPS, and allowing TTuba to focus on playing Doomfist.

The standard pattern of Doomfist play has been well established. A player can go in with Rocket Punch and then continue the fight or escape with a Rising Uppercut into Seismic Slam combo or a simple Meteor Strike. Where TTuba differs is he tends to engage with Seismic Slam first.

What this does is instead of only affecting one enemy, he has the chance to hit several with the crowd control part of Seismic Slam. And TTuba is one of the best at landing that ability. Frequently hitting two to three enemies, he trades the one-shot potential of Rocket Punch to immobilize multiple foes for his allies to kill.

As the only dedicated DPS player, Uknow almost exclusively plays Tracer. With the mobility Tracer affords him, Uknow follows up on TTuba’s crowd control, while the D.Va player Bang “Shubil” Min-Jun chases them both around protecting them with Defense Matrix.

But what makes Seven such a well-rounded team is, in addition to all of their offensive prowess, they have proven their well-above-average ability to stall out points time and time again.

Echoes of the best

Months ago, when Rogue was often brought up as a contender for the best in the world, one of the unique skills they had was to lose in an advantageous manner. They were famous for trickling onto a payload or control point and wasting their enemy’s time. And eventually seconds would turn into minutes and they would turn lost fights into successful defensive sides.

We aren’t suggesting that Seven is as skilled now as Rogue was at their peak at stalling—but instead that they execute it in a similar manner. Particularly, Shubil and Evo, the two tank players with their high health totals, stall exceptionally well.

Where Seven’s stalling differs from Rogue’s is that they are much more aggressive. For instance, Jean-Louis “KnOxXx” Boyer would use Winston’s Primal Rage and the shortened jump cooldown to fly high into the air and avoid taking damage. Evo instead uses Primal Rage to reach the enemy supports and kill them, removing their healing.

Despite the differences, Seven’s stalling is still very effective. They repeatedly force fights when payloads are mere meters from reaching their destination. With their combination of skill and unique strategies, they win what seems like disadvantageous fights. This means that Seven frequently stop their foes attacking phase just outside of a checkpoint.

It’s clear that Seven has what it takes to be a top four team in Challengers. They’ve already faced the majority of the other Challengers teams over the past few weeks, and defeated them all with ease. Of course they still must play the remaining matches, but all the evidence suggests they will succeed.

If Seven can complete step two, they will then have the two toughest steps ahead of them—qualifying for Apex, and proving they are a top team. Each progressive step gets tougher, and Seven still has a lot to prove.

As long as these six make up Seven, however, their future is bright.