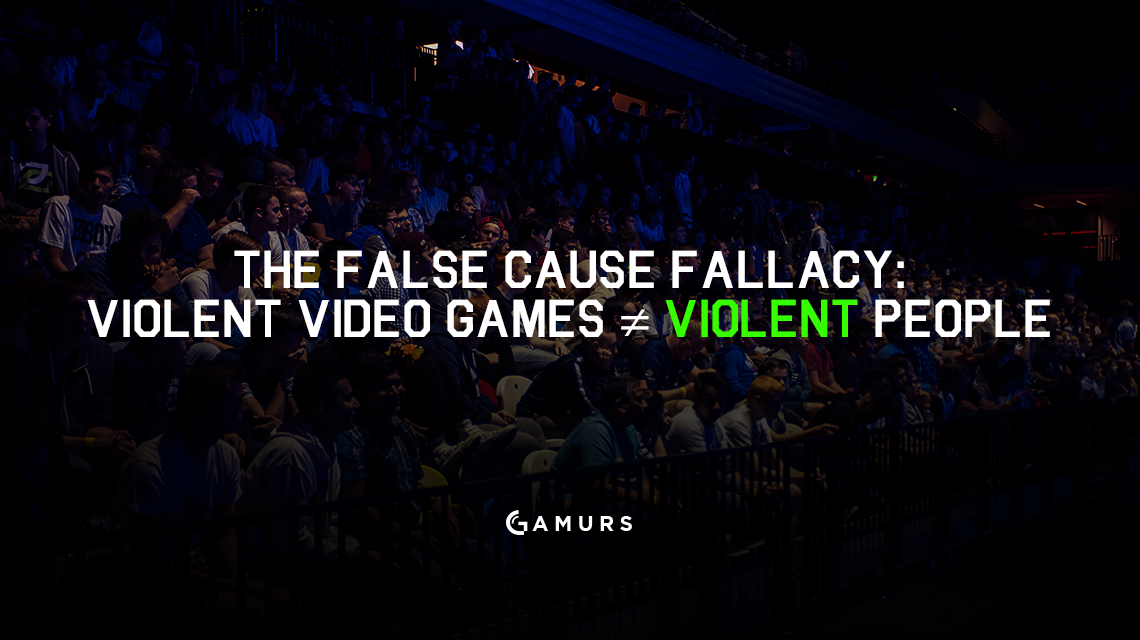 With the rise of esports becoming more apparent to the public eye (specifically because of Counter-Strike: Global Offensive and Overwatch ELEAGUE on TBS), opinions are shifting in a changing world where violence is at the forefront of the media. Mainstream media outlets (such as CNN, Fox News, BBC, etc.) are often riddled with headlines that relate to heavy topics, like shootings, terrorism and other violent occurrences.

At some point in this whole narrative, it’s intrinsic that people will search for the root of the problem. Media outlets pressingly urge that violent video games foster machinations within children and young adults that cause them to commit criminal acts. I don’t particularly know the media’s agenda behind slandering gaming as a societal issue, but it has become evident that video games (especially first-person shooter esports, such as Call of Duty and Counter-Strike) are being targeted as a scapegoat for directly causing aggressive behaviorisms that result in violence. As a result, the negative perception of esports and gaming in general could prove to be harmful to the validity, reputation and longevity of the esports community.

Before diving into this discussion, it’s important to note that correlation does not equal causation. For example: if I did research into poverty and theft, and if I found a strong relationship between being destitute and being a thief, it still does not mean that being poor causes an individual to steal. Poverty and theft are two related variables in this situation, but there are also countless other variables that need to be taken into account on a general case-by-case basis (such as demographics, locations, social influences, genetics, etc).

In an example where direct causation is taken into account: if I throw a ball at a wall one-thousand times using one-thousand different balls and one-thousand different walls, the ball will bounce off of it every time. Newton’s Third Law of Motion is at work in this scenario, and the ball will always bounce off of the wall because they are two variables that will always create the same outcome, regardless of the properties of each variable.

Any audience should be skeptical of any headline they see. Diction absolutely matters. I believe it can profoundly affect viewers subconsciously and it can easily sway their opinions due to varying attention spans (such as quickly turning away from the news and not getting the whole story) and varying education levels among individuals. Words such as “linked,” “associated,” “caused,” “likely,” “make,” “directly,” “posed,” “role,” etc. all should be taken with a grain of salt.

If you want to learn more about an important topic without bias, I suggest taking the time to do more research by utilizing reputable sources, such as scientific journals or academic, peer-reviewed journals. Most of the time when a news outlet, like CNN, uses a person’s title in a headline such as “Political _ Expert: X is responsible for Y,” they are full of it and are likely intending on pushing a certain agenda.

In a 2015 review by the American Psychological Association, their research on the subject “demonstrates a consistent relation between violent video game use and increases in aggressive behavior, aggressive cognitions and aggressive affect, and decreases in prosocial behavior, empathy and sensitivity to aggression” (APA). In other words, there’s an evident relationship between playing violent video games and behaving aggressively, anti-socially and unconventionally.

Researchers found that “no single risk factor consistently leads a person to act aggressively or violently … rather, it is the accumulation of risk factors that tends to lead to aggressive or violent behavior” (APA). Their unbiased, 31 study review shows that it has yet to be proven by any number of studies that video games are a direct causation for belligerence in individuals.

One particular study conducted by psychologists at Iowa State University found that “playing violent video games was shown to increase the likelihood of physically aggressive behavior, aggressive thinking, aggressive affect, and physiological arousal. … Because aggression is influenced by a large number of risk factors, no single factor can explain more than a small fraction of variability in aggression” (Anderson et al. 113).

A lot of the factors that are in play when evaluating aggression are heavily reliant on the subject’s personality traits. Going back to the mainstream media’s equation of “violent video games = violent people,” it’s ironic that “media violence deserves special concern nor special denial as a risk factor for aggression – it acts similarly to other known risk factors…” (Anderson et al. 115). It seems as though their tactic of fear mongering towards the general population with headlines of terror and sorrow have flowed in the same vein as violent video games.

Even though it’s been proven that video games containing violence have a correlation with a person being violent, I still believe there are many positives to playing these types of games. In the realm of esports, the focal point for success in competitive play is teamwork and improving sociability. Sometimes, there’s the possibility that the opposite is true and players spread toxicity, but I would argue that much of that is attributed to individual personality issues, lack of restraint and overall lack of empathy.

In the aforementioned Iowa State University study, they also mentioned that prosocial video games (such as any team work-based MOBA or FPS) have been shown to increase “cooperation, sharing, empathy, and helping behavior in adolescents” (Anderson et al. 121). Social skills such as these are crucial for young-adults still learning about themselves and others because (biologically speaking) humans are naturally social creatures.

It was also mentioned that “even a brief prosocial gaming experience leads to a decrease in hostile expectation bias (a tendency to perceive other people’s provocative actions as hostile instead of accidental)”(Anderson et al. 121). Overall, I think the effects of violent video games on its users is mostly pressed towards the negative side of the coin in order to justify disallowing them and persecuting them as a causal factor in creating violence in the world. There are always two sides of the coin.

Conclusion
In the grand scheme of the esports ecosystem, the assumption that “violent video games make you violent” could prove to have adverse effects for the longevity of esports as an industry. Recently, Counter-Strike was banned in Germany and the growth of the Counter-Strike scene may be hindered a small amount because of this censorship.

Ignorance is terribly bliss and populations of people throughout the world will continue to believe almost anything a malign media outlet will inform them. While the growth of several esports may vary based on the appeal of each, one thing may be certain: if the negative perception of esports and violent video games in general is not alleviated by the time more esports become mainstream, it may prove to be disastrous when significant growth is required across current and future esports to keep the dream of virtual competition alive.