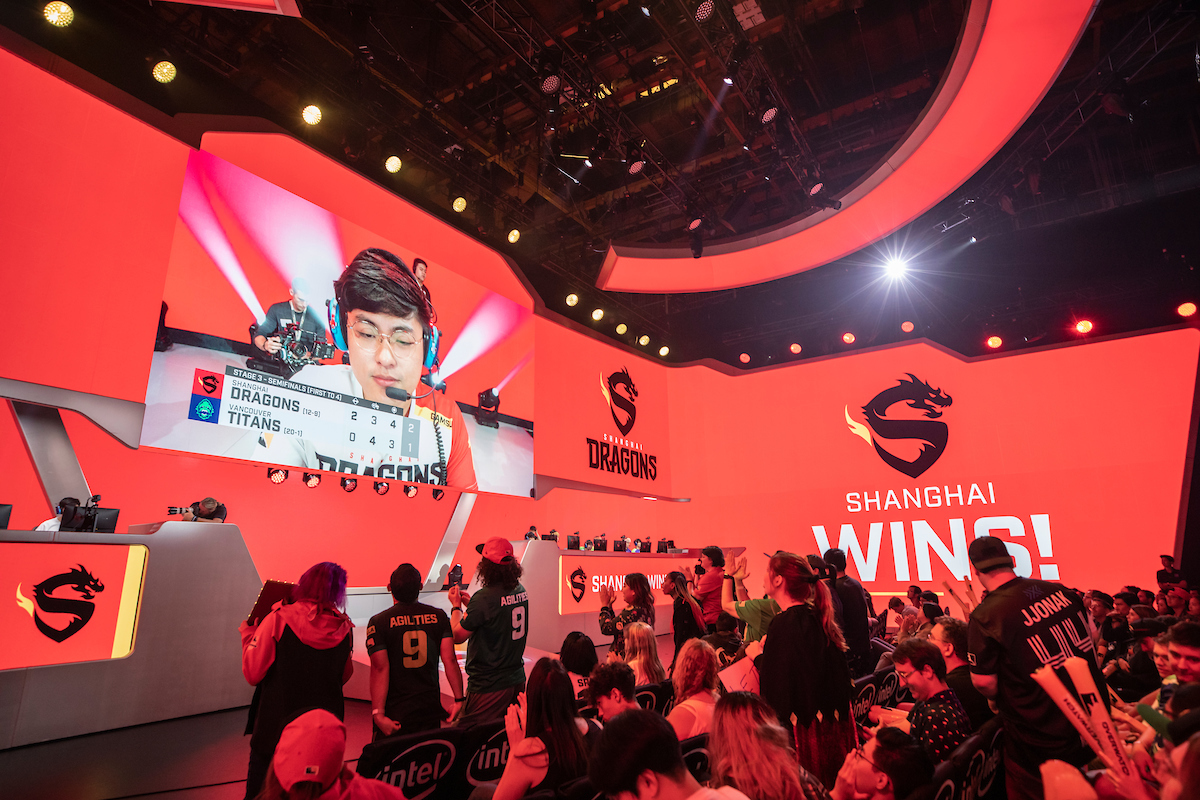 After a monumental series, the Shanghai Dragons have been crowned the stage three Overwatch League champions today. Their opponents, the San Francisco Shock, pushed the Dragons to the brink in a full seven-map series. With a 4-3 final score, the Dragons won their first stage championship to bring home $200,000 in prize money.

Shanghai began the stage three playoffs as the eighth seed in the bracket, narrowly securing the final playoff spot at the Overwatch League Atlanta Homestand. During the stage three playoffs, the Dragons managed to beat all three of the league’s top teams. They defeated the New York Excelsior in the quarterfinals, when the Excelsior were previously undefeated in stage three. Shanghai then demolished stage one champions Vancouver Titans and have now toppled the San Francisco Shock.

The Shanghai Dragons and San Francisco Shock first took the grand finals to Oasis, and fans were briefly concerned after a surprise roster swap from the Shock. Substitute DPS players Kwon “Striker” Nam-joo and Park “Architect” Min-ho were put in, as well as substitute main tank Yoo “Smurf” Myeong-Hwan. While the surprise roster duped Shanghai for a while, the Dragons took Oasis thanks to Bae “Diem” Min-seong’s terrifying Widowmaker shots.

The Shock chose Numbani as the second map and went back to their usual roster, bringing in main tank Matthew “Super” DeLisi, DPS Jay “Sinatraa” Won, and flex DPS Kim “Rascal” Dong-jun. The Dragons pushed through all points of Numbani with a stellar timebank. Despite efforts from Shock’s support line to keep their team alive, Dragons DPS Jin “YoungJIN” Yong-jin demolished the San Francisco roster with his Doomfist. San Francisco only completed two of Numbani’s three points and Shanghai went up 2-0 at halftime.

Despite having a better record on Paris, the San Francisco Shock chose Horizon Lunar Colony as their Control map. Shock main tank Super shined by staving off the efforts of Shanghai’s DPS, but the Dragons managed to take point A and roll through point B with over a two-minute time bank remaining.

The Shock also took both points with nearly four minutes left. But unfortunately for San Francisco, the combination of DDing’s Pharah and Diem’s Sombra couldn’t be stopped. The Shock were shut down before taking point B on round two and Shanghai went up 3-0.

For their final attempt at a reverse sweep, the Shock chose Havana. They took the cart all the way to the final point, but spot-on hooks from YoungJIN’s Roadhog and Barrages from DDing’s Pharah stopped the Shock from completing the map. San Francisco, however, refused to give up their stage title so easily. With monumental coordination from the entire roster, they held Shanghai from completing even one point of Havana, taking the score to 3-1.

San Francisco quickly realized that they had a chance. As Shanghai took the grand finals to Ilios, Shock rallied their roster. The Dragons focused on another DPS-heavy composition for the Control map, building around DDing’s Pharah. Even though flex support Yang “Luffy” Seong-hyeon hit some wild Ana Sleep Darts, the Shock pushed through and managed to take two rounds of Ilios. With a 3-2 series score, Shock began to have hope for a reverse sweep.

Shanghai opted for Eichenwalde next, knowing that San Francisco had a mixed record on the Hybrid map. Both teams were able to push through three points of Eichenwalde. On round two, the Shanghai Dragons bypassed 90 percent control percentage on point A, but were held off by the Shock. As the Shock completed point A, they brought the series to match point at 3-3.

For the final map, Shanghai brought the Shock to Dorado. And this was a nightmare for the San Francisco team. DDing’s Pharah and Diem’s Widowmaker had full run of the map’s long lines of sight and decimated the Shock’s attack. San Francisco barely managed to push the cart past point A and Shanghai quickly managed to bypass that point on their own attack. The Shock’s dreams of a reverse sweep were dashed and the Dragons took the championship 4-3.

The Dragons’ main tank and appointed leader, Noh “Gamsu” Yeong-jin, became emotional when asked what he’d tell fans of the team in a post-game interview. “I’ve been a pro gamer for the past five years and this is the only time that I’ve actually won a big tournament… in my career,” Gamsu said. “I want to thank all the fans, all the people who are supporting the Shanghai Dragons… thank you so much.”

The fans of the Shanghai Dragons have a lot to celebrate. During the Overwatch League’s inaugural season, the Shanghai Dragons went 0-40. They didn’t win a single game. While the team was completely revamped over the season hiatus and nobody from the original roster was on stage today, longtime fans of the Dragons are delighted by their team’s win.

Stage four, the final stage of this Overwatch League season, begins on July 25.