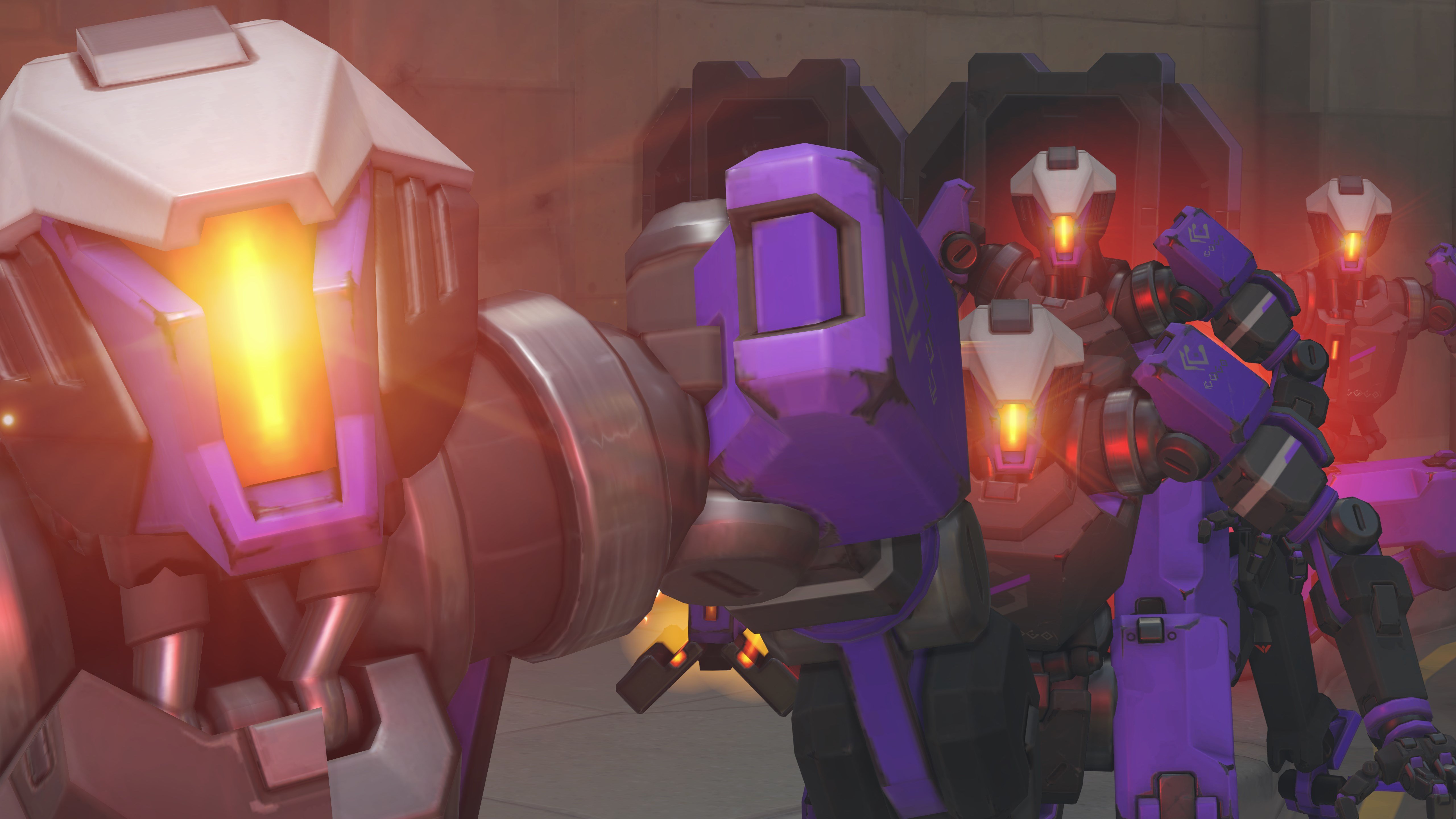 Overwatch’s new player versus environment brawl is a more robust event than its predecessor, Junkenstein’s Revenge.

Set seven years in Overwatch’s past, the event chronicles the uprising of an extremist omnic group called Null Sector. It’s the brink of a second war pitting humans against omnics—and Overwatch is the only group of heroes that can stop it. But because the group is barred from operating in London, Overwatch strike commander Jack Morrison—you likely know him as Soldier: 76—has to send out a rogue group of heroes to take on the omnics themselves.

Tracer, Torbjörn, Reinhardt, and Mercy are sent in alone to quell the threat. Overwatch Uprising begins as the heroes land in King’s Row, tasked with hacking three separate stations to take the omnic weapons offline and drop in their own. Difficulty increases as each hack is underway, ramping up pretty quickly as new omnic threats are introduced.

It’s not easy, but we’re here to help.

Each hero—Tracer, Torbjörn, Reinhardt, and Mercy—has an important role to fill in Overwatch Uprising. Understanding what that role is makes taking on the omnic enemies much easier. When a team goes rogue and forgets about their teammates, the game gets harder for everyone. When Null Sector omnics start piling up, everyone has to be playing their role.

Related: These are the new skins added in Overwatch’s Uprising event

That means Reinhardt can’t always be running off to swing his hammer at enemies and Tracer can’t always be behind enemy lines. Tracer, Torbjörn, and Mercy are all very squishy, so Reinhardt’s shield is very important in keeping them alive. Another high priority target to shield is Torbjörn’s turret. The turret does a great job of knocking down enemy health low enough that it’s a breeze for Tracer to wipe out. Likewise, Torbjörn needs to keep collecting scrap and keeping an eye on teammates to make sure they always have an armor pack.

It can also be tempting to whip out your pistol playing as Mercy to clean up kills in Overwatch Uprising. And that’s fine: It definitely helps. But knowing when and where that is acceptable makes a big difference. Unlike Junkenstein’s Revenge, players don’t respawn unless they’re resurrected by Mercy’s ultimate or revived by another hero—the latter of which can be very risky. Making sure all players are topped off with health at all times is really important. If Mercy is off shooting her gun at enemies, it’s likely she’s not playing attention to her teammates. And that means everyone is at risk.

And this, too, relates to Tracer. You’ll want to play her differently than you might in regular Overwatch matches. If Tracer goes off by herself and dies, that puts Mercy or any of the other heroes at a serious risk in trying to revive her. It’s better if Tracer stays with her team so that other heroes aren’t put at risk.

Reviving is risky, so be careful

Reviving becomes very risky when surrounded by omnic baddies. If Mercy has resurrect then it’s not so bad. But if players have to run into battle and panic to revive an essential player, things are going to go south quickly. There’s a couple seconds between the moments a hero gets knocked down and when they’ll permanently die: It doesn’t happen instantly. That gives the rest of the team a moment to try to clear out enemies from an area so that they can safely revive an ally. Get behind Reinhardt’s shield, too, if you can.

But don’t rush in. Get your team together to move in. Reviving isn’t instant, which makes your teammates really vulnerable.

That said, if you’re going to die, try to die in a less risky location. Sure, that’s easier said than done. But if health is getting low, retreat instead of continuing to fight. Even if you turn your back to retreat and get knocked out, you’ll hopefully be a bit closer to your team, making it easier to revive them. The key here is knowing when and where you can fight when low health. Understanding the Overwatch Uprising event and the way it flows—knowing which omnics you can take on and which you can’t—will help with that.

Each enemy needs to be dealt with in a different way. The more humanoid mech guys are the most common enemy in the Overwatch Uprising event. Aiming at their heads, they go down really fast. Slicers are the dog-like omnics that ignore the heroes and head straight to the payload: And that makes them easy to ignore, but you shouldn’t. The payload’s health is important, and if that goes down, you’re doomed. Reinhardt’s shield blocks damage, which gives Tracer and Torbjörn some time to get them taken out. Alternatively, a few swipes from Reinhardt’s hammer should do the trick, too.

Detonators are the massive orbs that explode once they get close to the payload. They’re scary, and players tend to focus fire on them and ignore other enemies. And that makes sense, but it’s not actually the best way to take them out. Reinhardt needs to be keeping an eye on these, but other heroes can ignore them if you’ve worked out this plan. Once they get close and start to explode, Reinhardt can charge them, moving them away from the payload. They destroy themselves so you don’t have to.

Overwatch Uprising also has omnics with shields that blast rockets. Tracer does nice work on these, getting behind their shield to take them out from the back. Likewise, Bastion has a weak point on his back, which makes Tracer a good hero to target them. But because she’s so squishy, it’s not always ideal. Keep track of your blinks and Recall ability as Tracer to make sure you can get away if you go in. Reinhardt charging Bastion is another easy way to wipe it out.

OR-14 unites—who will later evolve into Orisa in Overwatch’s current timeline—are the final boss. Their shields and damage output make them very scary, and the area they show up in is the hardest part of the game. It’s best to take on these enemies slowly, pushing forward as a team and making sure everyone sticks together. Focus fire targets to ensure no one lasts too long.

Another option for taking on the Overwatch Uprising is creating your own composition. Alongside the original mode, Blizzard has the same event available with the option to choose any hero. Using Bastion to replace Tracer to take on his omnic brethren is a popular choice. Bastion’s ability to tear up shields makes it a good replacement for the super squishy hero—with the added benefit that it can heal itself.

Four difficulty modes adjust the event’s toughness: Normal, hard, expert, and legendary. Regardless of what level you choose, Overwatch Uprising is the game’s best brawl yet.