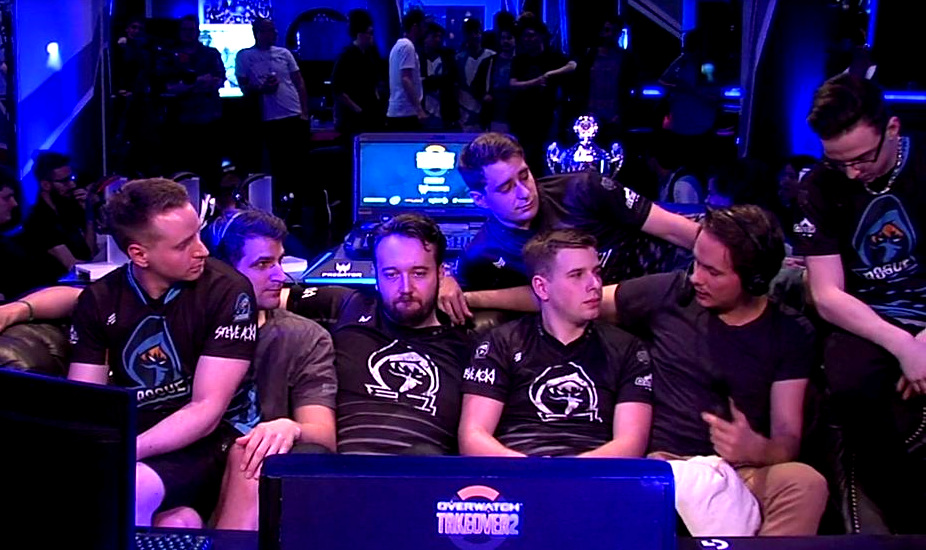 There are no suits or ties in sight: Everyone involved is wearing a T-shirt and shorts. Snuggled up on a tufted, black leather couch, Rogue are squeezed between the tournament’s casters, some sitting on each other’s laps. In between fielding questions from the casters, the team laughs at in-jokes. Terrence “SoOn” Tarlier tickles Jean-Louis “KnOxXx” Boyer’s face.

Overwatch TaKeOver 2 is not as buttoned-up as an event like OGN Overwatch Apex, with its flashing lights and packed stands, and that’s a good thing.

All thriving esports are led by a big personality or two—a star, like League of Legends’ Lee “Faker” Sang-hyeok or Michael “Imaqtpie” Santana. Both draw fans in massive numbers, whether it be from their immense skill or on-screen presence. The closest Overwatch has to that is former NRG Esports player Brandon “Seagull” Larned, and that’s not enough. That’s where an event like Overwatch TaKeOver 2 comes in: We’re brought closer to the players. We’re getting to know them.

A stage—or couch—like Overwatch TaKeOver 2 gives players the OK to let loose, to be silly in an informal setting, and that’s what the tournament was always meant to be.

The whole production has a livestreamed, reality show feel. Between matches, the camera zooms in on players making food or another napping in the corner. Players cast each other’s matches, providing professional insight unavailable in more traditional tournaments. Overwatch TaKeOver 2 truly highlighted the players and their personalities. The event is able to draw out a level of candidness and honesty unfamiliar to a more “serious” environment.

Good gameplay and exciting matches are still, of course, a major draw for the tournament—but the casual atmosphere is equally important.

But that doesn’t mean that every tournament should be Overwatch TaKeOver 2. They shouldn’t. A competitive scene flooded with casual tournaments runs the risk of not being taken seriously; we need the Overwatch Apex and its fancy set and bowtie-wearing casters, or the Overwatch World Cup led by national pride. But in an emerging esports landscape, we need to get to know the players. Overwatch fans are drawn in by incredible gameplay and exciting plays, but will stay when enamored by professional players.