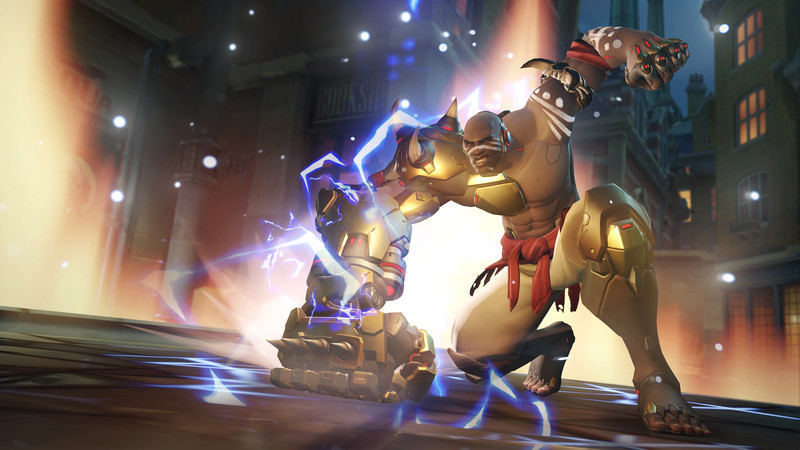 Cracks radiate outward from the massive, fist-shaped indent embedded in the asphalt street. Doomfist is here, and Overwatch’s meta is not safe.

Doomfist was released to the Overwatch public test region just yesterday. Wielding his massive gauntlet, Doomfist does both ranged and melee damage. Mobility is a key part of his kit, too: Though he’s got tank elements, he rivals Genji in speed and versatility. We won’t see Doomfist enter competitive play for a while—after all, he’s not even in the live game yet. Professional Overwatch players immediately took to the PTR to try him out, regardless. Those who perfect Doomfist’s ability kit the fastest will have an advantage in competitive play.

“He’ll be more of a surprise pick [early on],” Overwatch analyst Matt “flame” Rodriguez told Dot Esports. “People often forget when new heroes are added they need to bring something to the table that the current popular heroes don’t.”

He’s got good “pick-off potential,” flame added. Players could see Doomfist as a useful choice on maps with ample high-ground, replacing Tracer. “You might pick him [there] instead, or in situations where your back is against the wall and you need to win a fight at an ultimate disadvantage,” flame said.

Combined with heroes like Zarya, Mei, or Reinhardt, Doomfist will have an easier time setting up his punching abilities—Zarya’s ultimate groups players together, while Mei can slow and freeze heroes with her abilities and ultimate. Reinhardt’s ultimate, likewise, stuns enemies for a quick Doomfist punch setup. He’ll likely also work well with dive heroes like D.Va and Winston, according to flame.

Misfits tank player Jonathan “Reinforce” Larsson agreed: D.Va’s Defense Matrix will be essential in keeping Doomfist alive. “Doomfist has low survivability,” Reinforce wrote on Reddit. “With a larger hitbox than a Reaper, both sharing 250 HP, but without the blessing of something similar to Wraith Walk, Doomfist could melt within seconds if not protected or played well.”

Winston will have a similar role in creating space for Doomfist to engage with the enemy team. Cooperation and team work will be necessary in Doomfist’s success, as he just “lacks major survivability in the current PTR build,” Misfits DPS player Kevyn “TviQ” Lindström told Dot Esports. Doomfist will almost have a clean-up role where his strength is major kill potential, TviQ added.

“He is pretty tanky when played defensively and has massive burst potential on squishier heroes like Genji and Tracer,” flame said.

Related: Overwatch’s Doomfist: A breakdown of his abilities

Because of his mobility, Reinforce predicted that Ana will re-enter the meta. “The most optimal healer for Doomfist in this case would be Ana,” the Misfits tank said. “He has explosiveness already, we just need to keep him alive.” Likewise, Zenyatta will stay a key pick in hero lineups that include Doomfist, due to his long-range healing ability.

But until Doomfist’s statistics get finalized when he enters Overwatch’s live server, everything here is subject to change. When we see him emerge in professional play, we’ll have a better idea of how the competitive meta will adjust. “The game is going to progress a ton with Doomfist in the game,” Reinforce wrote. “Take this with a grain of salt, as the composition I’ve suggested might as well evolve further within a week or two, given it’s proven to be good at all.”