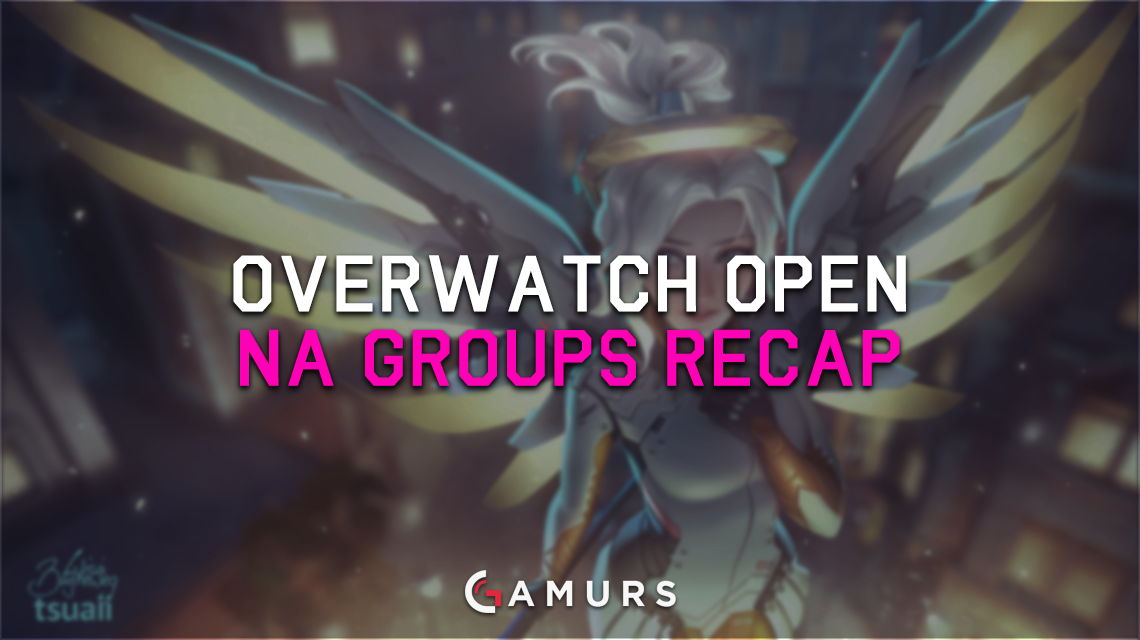 The North American side of the Overwatch Open concluded today, deciding which NA squad will be playing in the televised finals on Sept. 30. In case you missed any of the action, here is your NA groups recap. Everyone expected EnVyUs to confidently win their way out of the group stages and they did exactly that, taking easy 2-0 victories over both Splyce and Team Liquid, allowing them to exit the group with the number one seed. The boys in blue almost faltered on Numbani, a map famous for upsets, against Liquid who appeared to be making an epic overtime comeback. But EnVyUs edged out the victory off the back of Taimou’s Roadhog.

Splyce, on the other hand, found nothing but defeat in Atlanta, falling 0-2 against both EnVyUs and NRG. However, it isn’t all bad news for the organization as they are a low ranked team and this event gave them valuable LAN experience.

But the biggest storyline of this group was the matchup between NRG and Team Liquid. They met each other in their first matches to a devastating Liquid 2-0 victory. It was looking like the much discussed NRG bootcamp had not payed off. Luckily for the NRG players, they still had the lower bracket to try and redeem themselves, and they leaped at the opportunity, easy sweeping Splyce in a 2-0. This placing them in a rematch with Liquid, who were recovering from their 2-0 beating by EnVyUs

Seagull kept Liquid guessing on every map and displayed his biggest strength as a player: his flexibility. Playing everything from Zarya, offensive Mei, and his famed Genji, he lead NRG against Liquid as they took their final matchup the full distance. The third map of Numani ended in a tie, meaning that the match went to a tie breaking best-of-three on Nepal to decide the victor. In the end, NRG won and fought their way out of groups with a number two seed. As we saw, the groups nearly perfectly mirrored each other. Fnatic was the favorite of the group, the same as EnVyUs. In similar fashion, Fnatic swept their first matchup against Immortals to continue on in the upper bracket. Meanwhile, in the other initial matchup, Method faced a struggling Cloud9. Despite their current form, C9 was still the expected victor, but Method didn’t seem to get the memo.

Method turned around their performance from the qualifying rounds of the tournament and beat out Cloud9 in a huge upset 2-1 performance. But when faced with the stiffer competition of Fnatic, the Method squad fell to the powerhouse organization, defeated 1-2 and dropped into the lower bracket.

Cloud9 easily defeated Immortals in the lower bracket, making the Immortals storyline a mirror of Splyce’s as they exited the tournament on the first day. Once again, mirroring group A, we now had a rematch of the first round between the embarrassed Cloud9 and the rising Method.

Method won the first battle, but C9 was determined to win the war and swung back hard, taking the first map in Route 66. However, Method wasn’t ready to fall over and showed their prowess on Temple of Anubis, managing to take two extra point captures in the span of a minute. Then, when thrown onto defense, they held C9 to only a single point, despite having over five minutes of attack time left in order to take map two.

On the final map of Hollywood, Method completed the map with no time to spare, while Cloud9 managed to finish the map with three minutes left, giving them the chance to close out the series on their second offense. In that second offense, Reaver came up huge on Roadhog, sneaking around the backside of Method to hit critical hooks on Psychowaffle’s Lucio and Snow’s McCree in order to crush the remaining life out of the Method squad. With the series wrapped up, Cloud9 left groups in the second seed. 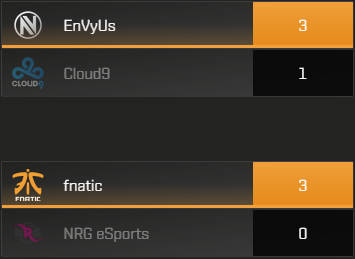 Coming into the North American semifinals, both matchups were the teams who swept the upper-brackets, EnVyUs and Fnatic, and the teams who fell into the lower bracket in the first round and fought through to win their spot in the playoffs, Cloud9 and NRG. However, neither Cinderella story would be completed.

Cloud9 had the misfortune of facing EnVyUs almost immediately after their match against Method. The first map was Numbani and C9 was unable to find any success. EnVyUs devastated C9, completing the map themselves and fully holding C9 on the first point on the back of Taimou’s Roadhog.

Hollywood was the showdown for map two and C9 faired much better, this time, preventing EnVyUs from completing the map. Surefour played an excellent Reaper on this map, picking off supports and closed out the win for C9 with a triple kill.

Wounded for the first time in the tournament, EnVyUs now had something to prove. On the final two maps of Watchpoint, Gibraltar and Route 66, they prevented Cloud9 from completing either map to convincingly close out the series in a 3-1 victory.

The other semifinal had NRG faced with the burden of defeating Fnatic. Seagull had some incredible Mei play on the first map of Eichenwalde, controlling corridors and blocking off Nano Boosted players. But he was no match for the dps duo of Iddqd and Buds, who with constant multikills, carried Fnatic to a 1-0 lead; a lead from which they never looked back.

Map two took place on Dorado and was a closer fight. Both teams completed the map on their initial offense, with Fnatic taking less time than NRG. This extra time afforded Fnatic extra room to play with and the victory, jumping to a 2-0 lead in series. NRG now had to pull a reverse sweep, and they chose to throw their bets on Hanamura.

In the closing game of the series, Iddqd gave us one of the most impressive individual performances ever in Overwatch, and certainly of the tournament so far. His McCree almost single-handedly held point B, shutting down Seagull’s famous Genji time and time again with well timed flashbangs. He even forsook the normal backline home of McCree players, took the Nano Boost, and charged into the fray, shredding tanks with Fan the Hammer, even picking up the comical melee kill.

Fnatic emerged unscathed from the semifinals with a clean 3-0 victory and moved on to face EnVyUs in the North American finals.

The crown of best team in North America, an extra $8,000 with a shot at $100,000, and a spot to play on live TV; these were the stakes for the final match of the North American side of the Overwatch Open. The two finalists, Fnatic and EnVyUs, have a storied history, a history notably devoid of Fnatic victories.

The series began on Kings Row, where Fnatic put their foot down. They held against the onslaught of EnVyUs, never allowing them to capture the first point. Looking to do the same in order to not fall so easily on map one, EnVyUs forsook the tank meta and went for something unusual. InternetHulk went back to his Symmetra, Talespin took up Junkrat, and oddly Harryhook picked up Roadhog. This meant Chipshajen was left to solo heal on Ana of all supports.

The gambit didn’t work out. Iddqd managed to find and destroy the first teleporter Hulk erected, ruining the point of Symmetra. While Harry manged to hit some critical hooks, the lack of healing for EnVyUs meant that Cocco on Reinhardt was unable to properly block for his team, and as such, they were wiped out, allowing Fnatic to take the series lead 1-0.

Wounded for the second time in the tournament, EnVyUs was determined to bring back the series on Lijiang Tower. On Night Market, Fnatic initially looked in control of the point, but EnVyUs brought it to overtime, narrowly taking the first point. Carrying their momentum, EnVyUs won Garden without allowing Fnatic to even capture the point.

On the map closer of Control Center, Fnatic took the lead confidently, holding the point until it was 75 percent captured. It required a triple kill from Talespin’s Tracer to break their hold. After Fnatic recaptured the point, it was the EnVyUs duo of Harryhook and Talespin, who fought nearly the entire enemy team to stop the victory, buying time for EnVyUs to return and close out the map, tying the series 1-1.

The third map of the series took place on Dorado, and was a textbook game from EnVyUs. Completing the map themselves with minutes to spare, they prevented Fnatic from pushing the payload to the second point. The dominating game left EnVyUs with a 2-1 lead, and sitting on match point.

EnVyUs was looking for the killing blow, and they found it on Nepal. Fnatic showed once again they are the weaker King of the Hill team. Fnatic almost took the first point of Sanctum, but the teamwork of Harryhook and Internethulk held off for the rest of their team to join them and take the first point.

When the teams met on Village, EnVyUs showed no mercy, dominating the initial fight. They did lose control of the point but brought it back through better ultimate coordination, allowing the Nano Boosted Reinhardt of Cocco to batter Fnatic into submission, leaving Fnatic only one map away from total defeat.

Going onto the final round on Shrine, Fnatic was visably desperate. They fell onto comfort picks, even ones that don’t fit the meta properly. They didn’t bring a Winston to the first engagement and handedly lost the fight without the AOE shielding and damage he provides. And the because Custa decided to not play Ana, Fnatic was missing the threat of Nano Boost, leaving them at a massive disadvantage. As such, EnVyUs cleanly won the final point, never letting Fnatic capture it, and winning the series 3-1.

In the end, EnVyUs moves onto the grand finals in unsurprising fashion. They were the favorites to win and they reminded any doubters why. They will play the winner of the EU bracket live on TBS on Friday, Sept. 30 for a shot at $100,000.

Join us again on Sept. 29 for our recap of the EU side of the Overwatch Open bracket.

What were your favorite moments from today’s Overwatch Open? Let us know by commenting below or tweeting us @GAMURScom.