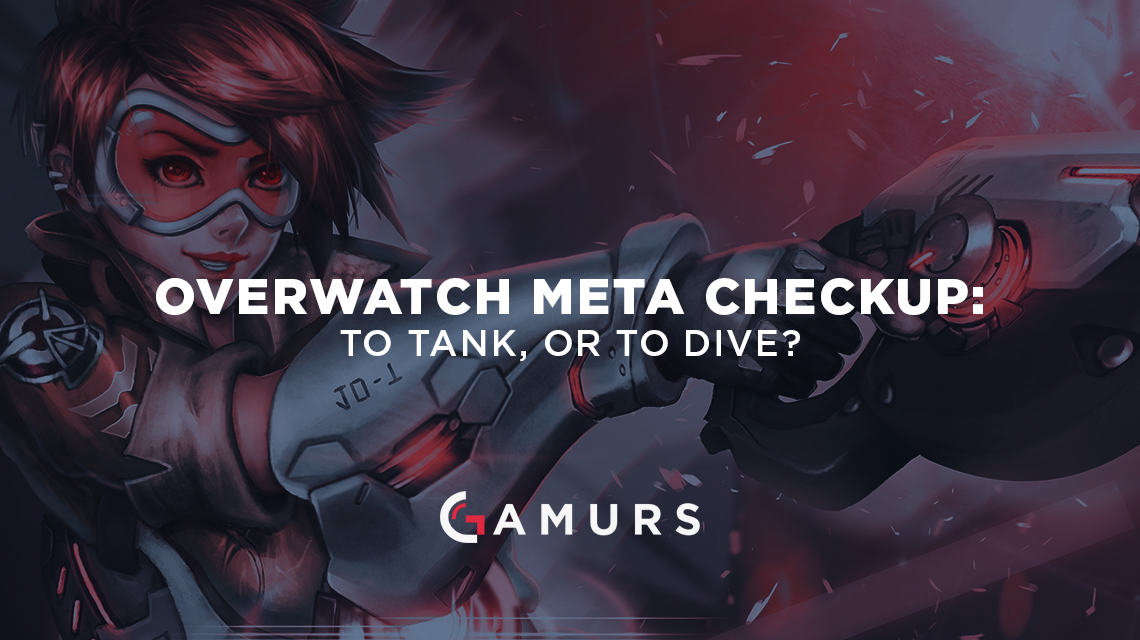 A Return to Form

Initially upon being added to Overwatch, Ana was not considered powerful enough to be played. She came in at the same time Zenyatta received some significant buffs and she was shelved. After receiving some buffs of her own, Ana found herself at the forefront of the meta, enabling the first tank meta we saw. Now, almost three months later, we find ourselves in another tank centric meta that Ana is enabling.

As is the usual with every new meta, hundreds of upset fans, redditors, and players have expressed their outrage at the current meta and have called for nerfs to many key heroes, such as Ana and Dva. However, those nerfs have not come, so those at the professional level are forced to adapt or die. In many cases, that means adopting the tank meta, or in some cases, playing a shockingly effective dive heavy style.

Team EnVyUs has now won back-to-back major championships and they have done so by playing, and perhaps setting, the standard meta. They occasionally made tech choices, such as Symmetra or Winston, but must often they stuck to what is now the standard composition: Reinhardt, Dva, Roadhog, Solider 76, Lucio, and of course, Ana.

The strengths of such a composition are plentiful. There is plenty of tankiness and blocking potential with both Reinhardt’s shield and Dva’s defense matrix, and insane amounts of healing between Ana and Lucio, while Solider and Roadhog can both top themselves off. But the real strength of this composition is how many different win conditions it has.

Perhaps the most obvious is quite simply Roadhog hitting a couple hooks. If your Roadhog player can find even just a single opening, you can almost guarantee a fight win. The damage or healing you can deny from the enemy team with a single pick often means the fight is already won. But perhaps the enemy team has a star DPS player who is running amok. Well don’t worry, you have answers for that too.

Ana, of course, can hit a sleep dart, but the more reliable way to shut down the enemy DPS is to throw Dva at them. Mickie is a fantastic example of this, as over the course of his time on nV, he has been tasked with shutting down DPS stars, such as Tviq, Arhan, and Shadowburn. Dva’s natural tankiness combined with Ana’s ability to heal her at any range means that Dva turns into a DPS player’s worst nightmare.

However, sometimes you need to take a clean team fight. Skirmishing and trading kills isn’t allowing you to push the payload or capture the point. You need something more than the consistent level your heroes give you. Well, don’t be worried, the new standard composition has plenty of explosive potential.

Soldier 76 already does a huge amount of damage with his Tactical Visor, especially after his buffs. But this just isn’t enough, so add a Nano Boost and now you have a highly mobile, self healing, damage machine to clean up team fights for you. But this doesn’t include the combo that made Mickie famous: an Earthshatter into Self Destruct. It does require your Reinhardt to outwit their foe and land a multiman ultimate, but if they do, the payout is massive.

As we’ve seen, nV’s primary tank Cocco has become particularly adept at disabling the enemy team for Mickie to blow them to smithereens. As powerful as this combo is, it’s important to note that this is the only aspect I’ve mentioned of the current iteration of the tank meta that does not have Ana as a key factor. But, this now leads us to the weakness that the dive compositions try to exploit: the reliance on Ana.

Zebbosai with a Widowmaker pick in DreamHack Winter

By the time DreamHack Winter came around, the tank meta was in full affect. Fnatic’s Hafficool began to show off his excellent Dva play and was a contributing factor to their upset victory over NiP. But Europe’s Misifts were not to be denied. They took down Fnatic as they played to the beat of their own drum with a unique dive composition: Winston, Tracer, Genji, Zenyatta, Lucio, and oddly enough, a Widowmaker to round it out.

This composition was in stark contrast to the triple tank Fnatic was often running and truly was a one off. Few teams in the world would be capable of running this composition to the level Misifts did; having two players who can play Genji and Tracer to a high level is already rare enough. Both heroes require similar mindsets, and we often see one player being responsible for their play on any given team. But on top of that, it requires a Widowmaker the caliber of Zebbosai.

The composition has an interesting tag team dynamic. The dive heroes and the Widowmaker all share the same goal, eliminating the enemy backline. Whether it be Ana, Lucio, or a DPS hero, they all present vulnerable targets that need to be protected by tanks. But they can only protect their vulnerable allies so much.

The numerous dive heroes provide several threats that their foes must react to. If they slip up, they are liable to be cut down by a Genji, shredded by a Tracer, or zapped by Winston. The most agonizing part of it all is that in their efforts to survive, if they leave cover for even just a second, Widowmaker can take their head off.

Misfits took home a championship with their composition. In interviews, they have admitted it was in effort to counter the triple tank composition. Zebbosai, in an interview with Sideshow, stated they hadn’t figured out triple tank to the level of their foes, especially NiP, and had some tricks up their sleeves. Clearly, those tricks worked, but Misfits weren’t the only ones to pull these tricks out recently.

IEM recently made its return to the homeland of esports, South Korea. In addition to the homecoming, IEM celebrated the debut of a new esport, Overwatch. A mix of European and Korean teams were invited to compete at Gyeonggi. In the end, it was the Korean challenger squad LW Red that took the title home. They dropped only two maps over the course of the whole tournament, largely in part to their strong offensive sides. On those offensive sides, they showcased their own dive composition: Winston, Dva, Genji, Tracer, Lucio, and Zenyatta.

This mutation of the dive composition doesn’t quite have that one-two punch of dive heroes and Widowmaker, but what it lacks in that area, it makes up in the fact that it actually runs a Dva. Dva enables the composition to mimic a standard comp for short periods of time, by which, I mean the team as a whole can leave cover and instead use the Defense Matrix in place of a Reinhardt shield in order to trade damage safely.

But the power of this composition is not in explosive closing potential. Because LW Red didn’t run Ana, they didn’t have the NanoBlade combo for Nanohana to end a fight alone. What this composition instead had is the ability to grind out a fight until they won. The double sustain ultimates from Zenyatta and Lucio enable the four diving heroes to continue slugging out the fight.

When all four of the dive heroes are threats, you can begin to realize how threatening this composition is to the enemy backline. Lucio is slippery and Ana has tools to deal with enemy divers. So how do you as a support deal with four enemies diving you who your allies can’t kill due to their artificially inflated tankiness? As we saw at IEM, the answer is simple: you don’t; you die.

Cut the Legs Out

That leads us to the root cause of why the dive compositions can be so effective against the tank composition. The dive compositions excel at removing the core strength of a tank composition off the map, Ana. Usually protected behind a wall of health bars, she comes under assault from too many directions to deal with. Sleep dart one, Roadhog hooks another, Lucio boops one back, but you’re still left with a Dragonblade Genji in your face.

The tank meta thrives largely in part to Ana. Her ridiculous amount of healing makes the already difficult to kill high health threats even harder to eliminate. Meanwhile, Nano Boost turns her allies into devastating fight ending machines. Against the standard tank compositions, Ana is safe, but when faced with a dive heavy composition, she can be removed; and upon her removal, it’s all downhill for a tank composition.

With Ana eliminated, the lack of burst healing means that even the tanks can be taken down. This is only facilitated by Zenyatta. He found himself a position in both the Misfits and LW Red versions of the dive comp. Of course, the Orb of Harmony excels at heal-diving allies by simply placing it upon them. But the real strength of Zenyatta in these compositions is always his Orb of Discord.

Sometimes, picks like Genji have trouble dealing with tanks. It’s very easy for Genji to dip, duck, and dodge around the less mobile tanks to stay alive. But he also finds that he struggles to kill the tanks himself due to their huge health pools and defensive abilities. But once Discord Orb is applied, it becomes significantly easier, 30 percent easier in fact. Especially after a dive composition has eliminated the enemy Ana to limit their healing output, the additional damage Discord Orb allows an entire team to deal means the tanks turn to paper.

So far, a dive composition should sound fantastic. It has many tools to effectively deal with the tank centric compositions that are dominating the meta. Right about now, you should be asking why so few teams run these dive compositions? Frankly, the answer is easy: most can’t.

These dive compositions are very difficult to execute properly. Lacking traditional engage tools like hooks, Earthshatter, or Graviton Surge, these sorts of compositions rely on player skill to find gaps in the armor to strike a blow. Many teams simply do not have the players to make it work, particularly having a team that possess both a Tracer and Genji player is a rarity.

Another factor to remember is in both examples I presented of a dive composition winning a title, neither team had to face EnVyUs, the current kings of the standard meta. When played to the highest levels, the standard composition can shut down a dive composition. Because the only shield preventing Earthshatter is the easily broken Winston bubble, any diving player is incredibly vulnerable to being stunned. Especially for teams facing EnVyUs and Cocco, a famously passive Reinhardt, this is a near impossible obstacle to overcome.

What is it Going to Be?

So the question is: to tank, or to dive?