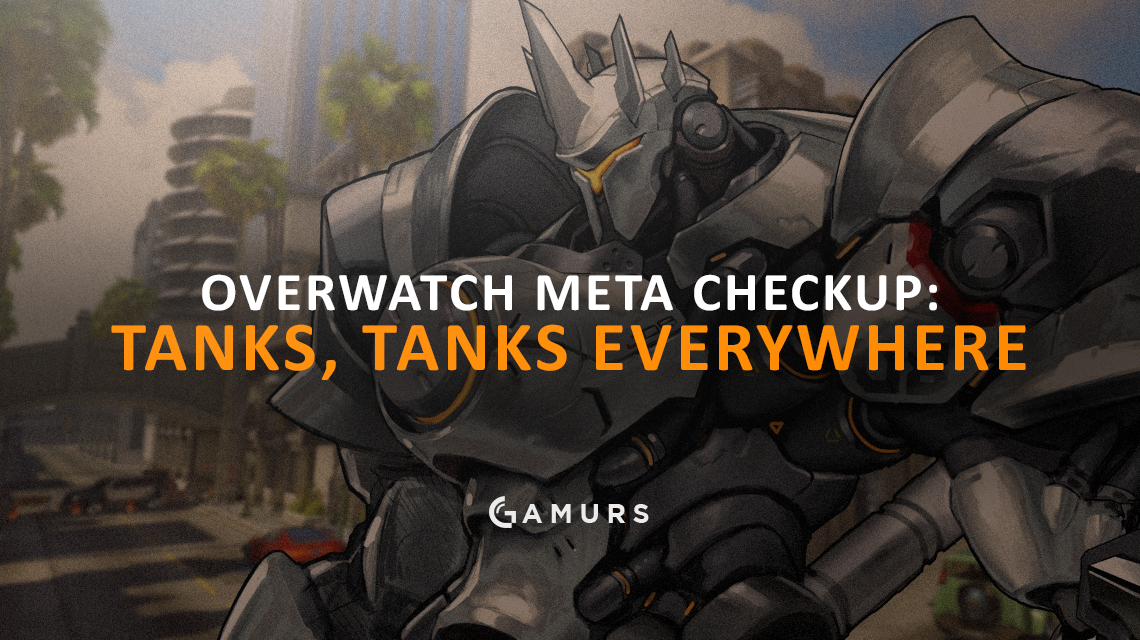 On July 19, 2016, Blizzard released a special update to Overwatch. For the first time since the official release of the game, a new hero was added to Overwatch. As I’m sure you know, this hero was Ana, and she was made with a unique character concept: a support sniper.

The addition of a long range support combined with the large buffs Zenyatta received in the same patch led to many whisperings of an incoming triple or even quadra support meta. As we saw, the whisperings were not true. Zenyatta quickly replaced Mercy in many team compositions, whereas Ana saw very nearly zero play time.

Now just over two months later, Ana has found herself well cemented in the meta. But this is not a support centric meta. Instead, competitive Overwatch has entered a tank centered meta; a meta that Ana is directly enabling.

Tanks in Overwatch excel in a multitude of categories. Often acting as primary engage for their teams, they also carry the burden of absorbing damage for their allies. Every tank that is prevalent in the meta (sorry Dva) has some form of crowd control to disrupt the enemy team. This is an important requirement in Overwatch, as it allows you to prevent your enemies from entering contested areas of the map, such as control points, or set up your dps players to shred their targets.

But tanks like Roadhog, Zarya, and Winston also deal plenty of damage themselves, at least enough to threaten softer targets like the enemy supports. Reinhardt was traditionally left out of the list of damage dealing tanks because unlike his counterparts, he is melee and his ability to reach the backline was too unreliable. However, this mindset is being phased out by Ana’s addition to the meta.

The meta we are seeing emerge is composed of 3-3 and 4-2 team compositions; three or four tanks, two or three supports, with the possibility of a dps hero, which often takes the shape of Tracer. NiP is the foremost example of this style of team composition and they just recently piloted this strategy to a 3-0 win in the finals of the Lenovo Cup against Reunited. On both offense and defense, they most often went to a roster comprised of Roadhog, Zarya, Reinhardt, Winston, Lucio, and finally Ana.

The specific way NiP plays this team composition is what allows them to succeed so well. Their four tanks intentionally walk into positions where they can be fired upon. This act does two critical things that makes this strategy work. The first is obvious, they take damage from enemy fire. This damage is then healed by Ana in order to charge her ultimate. Ana’s Nano Boost is one of the fastest charging ultimates in the game, and the way NiP knowingly allows their tanks to be damaged means her ultimate is available even quicker.

It is critical to note the reason you don’t substitute one or two of your tanks for more traditional flankers or hitscan dps heroes is quite literally because they are tankier. They are at much lower risk of actually dying when they expose themselves to brief enemy fire. Their larger health pools give them more room to play with when taking damage, which in turn provides more health for Ana to restore for her ultimate charge.

The second thing this strategy unlocks is Hymzi. For those of you who don’t know, Hymzi plays for NiP and is probably the best Roadhog player in the world. The rate at which he hits hooks on critical targets is insane. Even beyond that, his understanding of the hook’s buggy hitbox is incredible and he frequently hits hooks on enemies who appear to be behind walls.

The entire NiP squad will wait for two keys to be turned before they press the nuclear launch button. They allow Ana to charge her ultimate and then wait, usually not very long, for Hymzi to hit a hook. Upon reeling in their catch, NiP quickly focuses that target down, then Ana throws her Nano Boost onto Reinhardt while Lucio speeds the entire team in.

The deliberate act of waiting for both conditions means that the first full scale fight of the game is at a man advantage, while also having a super powered Reinhardt swinging away in the enemy backline. Remember earlier when I said Reinhardt was not traditionally thought of as a reliable dive hero? Well Nano Boost changes that.

Reinhardt Does his William Wallace Impression

Nano Boost transforms Reinhardt from a big beefy protector into a big beefy death machine. The 30 percent speed boost means Reinhardt can quite simply run into the enemy backline. Previously, with just Lucio speed, this was not possible as the enemy Lucio could likewise bring his team backwards to safety. But now with Nano Boost, any hero becomes faster than the enemy team.

Nano Boost already covers Reinhardt’s primary weakness, but it also boosts his strengths. Previously, when he found enemies in range of his hammer, he was more than capable of beating them into submission, taking only three swings to defeat most enemies. But the 50 percent extra damage provided by Nano Boost brings that down to only two. As if this wasn’t terrifying enough, the 50 percent damage reduction also means that one of the hardest heroes to kill in Overwatch is just that much tricker to take down.

But the even more terrifying side effect of an Ana boosted Reinhardt is how quickly Earthshatter, Rein’s ultimate, gets charged. The massive amounts of damage Reinhardt does when Nano Boosted means that if he gets just a few swings to connect, he will completely charge his Earthshatter, arguably one of the best ultimates in the game. Because Nano Boost is almost always available, it means so is Earthshatter. When you remember that Zarya is in the game as well, it becomes apparent that the team running a 3-3 or 4-2 composition almost always has an AOE crowd control ultimate up.

Putting a bow on it

These ultimates are what brings this whole strategy together. Since a 3-3 or 4-2 team composition lacks damage compared to a more traditional setups that runs two or three dedicated damage dealers, it is much more reliant on these ultimates. The extra time to deal damage provided by Earthshatter and Graviton Surge allow the normally secondary damage sources in Zarya, Winston, Roadhog, Ana, and Lucio ample opportunity to defeat their foes.

So in summary, pick a lot of tanks. Let them get slapped around to charge Nano Boost. Use Nano Boost to charge Earthshatter. Win fights because you have ultimate advantage. Rinse and repeat.

If it bleeds, we can kill it. Unless Ana heals it.

Now comes the obvious question: how do you beat this strategy? As we saw, NiP just yesterday decisively won the Lenovo Cup with the 4-2 strategy and as such, there is no established and reliable counter. However, there have been a few options teams have tried and have met mixed success.

The seemingly obvious answer is to play Reaper, who brings his Hellfire Shotguns into the fray, weapons notorious for shredding tanks in close quarters. In fact, as we’ve seen, Reaper has been tried by several teams, but interestingly, to not much success. A big reason is we see many Reaper players actually stop shooting their targets before killing them.

I’m not sure if this is an instinct born from an old meta where their McCree player would clean up while they move onto the next target, or because Reaper players are just bad. Regardless of the reason, this is a symptom of just how many tanks are in each game. Again, using NiP as an example, their tanks rotate in and out of the frontline, taking turns soaking damage and then being healed. Reaper lacks the ability to properly pursue like a Genji or Tracer does, but those two can’t shred tanks like a Reaper.

So the better answer to either a 4-2 or 3-3 composition ironically enough is to play a 3-3 composition. All the tools needed to defeat the current meta team compositions are built into the very same composition. Your enemies Nano Boosted Reinhardt is charging you? Have Ana sleep dart him. Alternatively, you can use Roadhog, Winson, Zarya, or Reinhardt ult to lock him down and wait out the Nano Boost.

And that brings us to the best way to defeat this meta: teamwork. Simply put, when their tanks, or even better their supports, look for poke or engage and your team can punish them by killing them, you now flip the man advantage in your favor. Zenyatta facilitates this perfectly. His Discord Orb both makes one target squisher, as well as clearly marking a target for your whole team. No voice communication needed. Just shoot the guy who has the big red circle on him; so easy, you can use this tactic in solo queue. Maybe.

Putting a bow on it, again

Ana was misunderstood on release. Now that teams have figured her out, we realize the full power of her kit. It isn’t often the addition of a single character can change the entire way a game is played, but in Ana’s instance, that is the case. We find ourselves in an incredibly potent meta, one that oddly enough is countered by itself. With Ana nerfs on the horizon, the new 3-3 and 4-2 compositions may find themselves out classed, but for now, the tanks are here to stay.