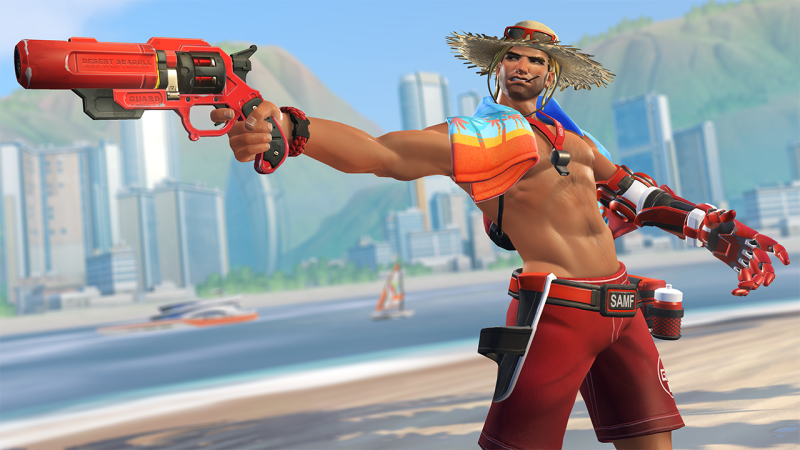 The latest Overwatch patch, which brought the Overwatch Archives event, also gave McCree a few voice line updates. Lifeguard McCree has a ton of silly, little details that make it special—instead of a tumbleweed, a beach ball rolls by during his ultimate, and instead of a BAMF, he’s a SAMF. (That stands for safe, we assume.)

Related: There are a bunch of hilarious little details hidden in Overwatch’s Summer Games

But he was missing the voice line details that add just a bit more to the immersion of the skin. With the new Overwatch patch, McCree’s ultimate voice line has been changed from “it’s high noon” to “it’s high tide.” Fitting, eh?

During his Flashbang ability, he’ll now chastise his enemies with a loud “No runnin’!”

Lifeguard McCree was released in August with the Overwatch Summer Games event. McCree’s beach-themed skin was already amazing, but it’s nice to know that Blizzard is dedicated to making these older cosmetics even better. And he’s not the only Overwatch hero to get a sneaky update during the Overwatch Archives event. Corsair Ana, which was available during the Overwatch Halloween Terror event, now has a hello greeting of “ahoy matey.” Ana’s Corsair skin (and subsequent voice lines) isn’t quite as cool as Lifeguard McCree, but the voice line boost-up gets it a bit closer.

Here’s to hoping we’ll get even more skin-specific voice lines for some of Overwatch’s coolest skins.