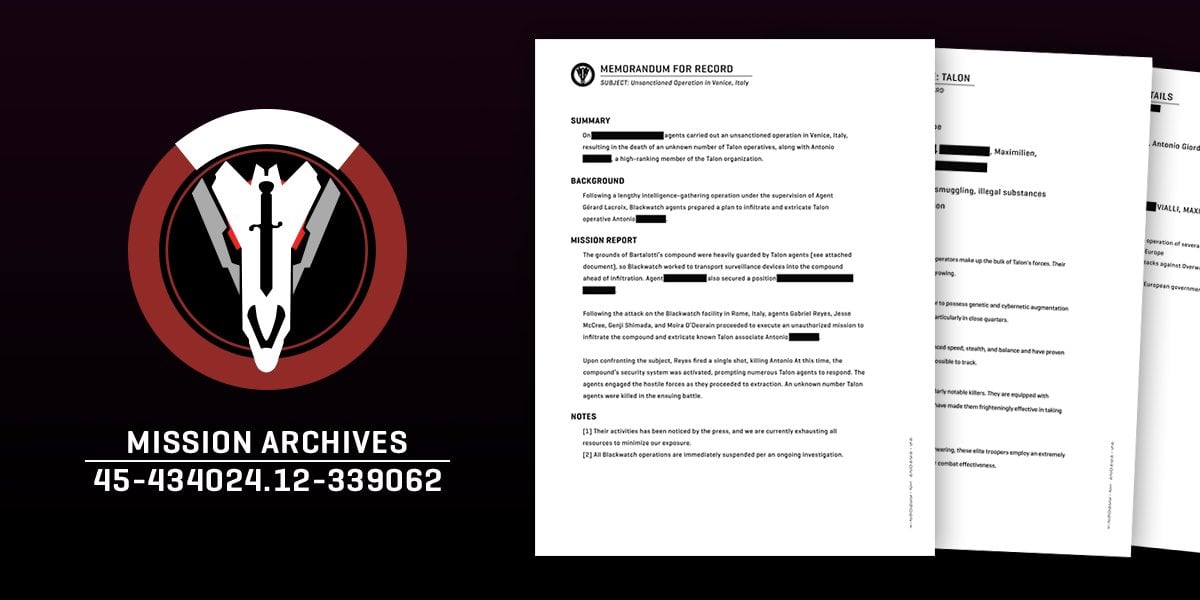 Overwatch Archives is still ongoing, but Blizzard has just released some new lore information about the mission. The Overwatch Retribution brawl brings the Blackwatch crew to Talon’s Venice-based headquarters.

The plan was to “extricate” a Talon boss called Antonio Bartalotti, but Blackwatch agent Gabriel Reyes (Reaper) ended up killing the big baddie. The declassified mission archives go over what happened in Venice, from the team’s infiltration to their hostile extraction. Everything that goes down in the Overwatch Archives brawl is outlined in the in-lore files.

But there’s some information regarding known Talon associates, like Vialli, Maximilien, and Akinjide Adeyemi (the Doomfist before the one we now know). There’s a name blacked out on the last page; it’s unclear who exactly that is. Another name is blacked out, but this time it’s a Blackwatch agent, who “secured a position.” It’s possible this is the agent that extracted the team, but that’s just speculation.

The last page of the document runs down a list of Talon’s paramilitary agents, including troopers, enforcers, assassins, snipers, and heavy assault units. These are intimate details of the inner workings of Talon

There’s not much new information in the files, but it does confirm a bit of information from the event. Talon’s got seriously powerful units, many of which possess “genetic and cybernetic augmentation.” Likewise, it’s a confirmation that Blackwatch is suspended, but we know the black ops organization is around in some form a year later for Overwatch Uprising.

Knowing Blizzard, there’s likely some hints in here regarding future Overwatch lore. Is the unnamed Blackwatch agent a potential hero? What about that blacked out Talon operative? Or is it just filling out some details for the Overwatch Archives event?