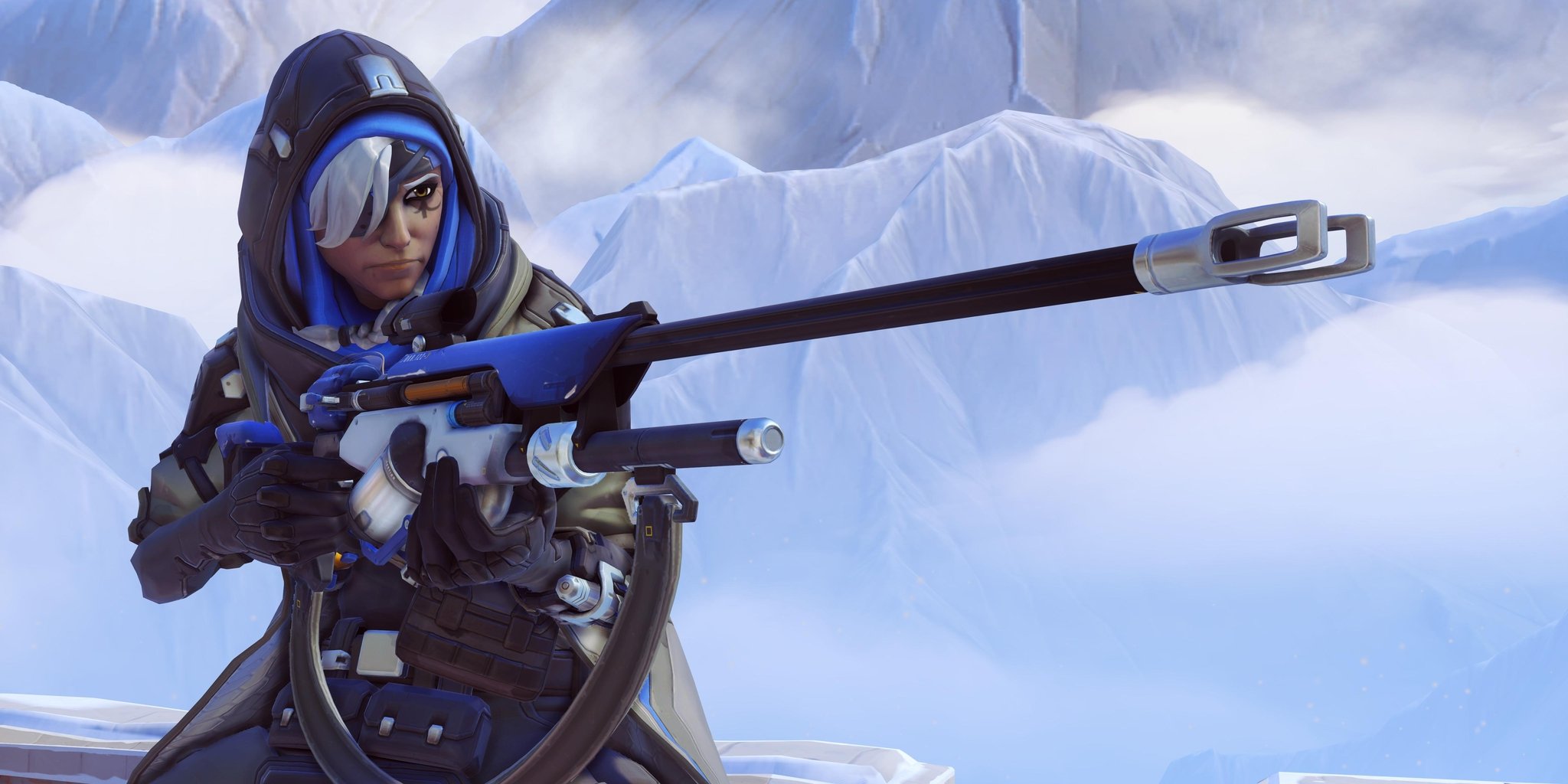 Overwatch’s first new hero since its release appeared on the Public Test Realm (PTR) this week, and she’s got some pro Overwatch players excited that she might be the highest skill cap hero in the game, one that finally promises to shake up the support role.

Ana Amari, the 60-year-old sniper medic, brings a unique kit to the table while simultaneously offering strong damage and healing potential with her sniper rifle, which both heals and hurts at any range. Her Sleep Dart is one of Overwatch’s most powerful crowd control methods, while her Biotic Grenade, which increases healing on allies and eliminates it on foes, gives her a handy tool to change the course of a fight, or to burst down an enemy flanker.

To get in depth with Ana’s kit, check out our guide on Dot Esports and then hit the PTR to give her a shot. She’s a tough hero for quick match as she requires impeccable teamwork to really get the most from her kit, but the pro supports who have played her are giving rave reviews.

“I think she’s insanely high skill cap, potentially even the highest in the game considering how many options she has, while at the same time they are pretty hard to perform (both abilities being skillshots),” Greg “Grego” McAllen, support player and Lúcio main for Cloud9, told the Daily Dot. “She adds two new mechanics to the game and I’m looking forward to seeing how other great supports use her as well.”

Harrison “Kruise” Pond of Reunited, known for his playmaking ability on Lúcio and the frenetic way he moves his mouse, isn’t being shy about his own love for Ana.

“I could be biased, being a support player and all, but I really like her how she is, a mix of damage and healing is always nice to have,” he said, though he’s worried she may be a bit too strong. “Some may argue she needs some damage tweaks, but we will see how it plays out.”

Since Overwatch entered closed beta eight months ago, esports competition has largely centered around lineups with an unchanging support team of Mercy and Lúcio thanks to a powerful set of tools that allows them to help engage fights, retreat from them, and survive enemy ultimates. Ana should allow teams to do many of those things, if played well, adding another dimension to competition.

Among pro Overwatch supports, Grego seems like the perfect candidate to take advantage of Ana’s kit. Cloud9 often deploys him on Widowmaker when the map allows it, so he’s already shown he’s handy with a sniper rifle. Now he can dish out damage and keep his team alive with one character.

“I do think she’s very strong, though she should not be viewed as a support per se,” Kruise told Dot Esports. “She’s a hybrid; does a decent amount of damage and heals pretty well. Really fun to play though and I do think she will see a lot of play in competitive if she stays how she is.”

He feels that Ana’s damage numbers may need to come down because she can win too many fights with carries at mid and long range. But he feels her kit is perfectly designed. Blizzard has succeeded in adding more diversity to the support lineup.

That doesn’t mean he’ll be the one playing her, though. Pro teams have two supports in the lineup. She requires strong aim and decision making, so in many ways it makes sense to give her to the most talented aimer. But it’s quite possible compositions will require Lúcio or Mercy or even both besides Ana.

Some teams could have trouble working Ana into the lineup if they don’t have the talent to take advantage of her. Many Mercy players may have landed on that role because they are less talented at the aiming aspect of a shooter, but that’s going to be a prerequisite of support play in the post-Ana world. Grego and Kruise feel most pro teams will be prepared for that shift, considering the possibility of playing more heroes was there from the start.

“That’s the thing; you need to make the smart decision,” Kruise said. “I am good on all heroes but I am really good on Lúcio as I play it so much, so good on Lúcio that I don’t really want to swap off it and let someone else do it. I’d rather have someone else learn Ana over Lúcio, if that makes sense? But if Lúcio is not needed, which he isn’t for some points, then I will play Ana.”

Grego and his fellow support Adam Eckel feel that Cloud9 will handle that situation differently. Both are comfortable giving Ana to Grego, a Counter-Strike veteran with strong hitscan credentials, despite him serving as the team’s usual Lúcio.

Considering the difficulty of playing Overwatch’s newest hero, it seems likely the player’s talent on Ana, not Mercy or Lúcio, will be the deciding factor for most teams.

“Aim is a given, but decision making, whether you go for the kill or heal your teammate, is going to be a bigger factor,” Kruise said. “The player who can balance that the most will be the best. Also, landing the Sleep Darts on the right targets at the right times is very important. [Your target] needs to be made clear before a fight breaks out—‘I am going to Sleep Dart Mercy’—so people know to avoid attacking her.”

That’s often easier said than done considering Sleep Dart has a short delay before firing and a very small hitbox for an Overwatch projectile, but Kruise just shrugs off the difficulty. “If you miss, you miss.”

Grego believes landing those high impact Sleep Darts will separate the good Anas from the great ones. “Sleep Dart is gonna be one of those things that you just can’t rely on,” he said. “It’s a bonus where great Ana players will be able to shine. I’ve looked at it as a Winston counter, or like I said earlier, Ana ult counter against easier targets like Rein/D.Va/Winston. But yeah… if you’re playing against a Genji and you can just sleep him and ignore him in the middle of a fight that’s pretty insanely impactful.”

“If you are able to land those Sleep Darts and get your ulty fast enough (which you can pretty fast with healing and dealing damage) you will be destroying teams for sure,” Kruise said. “I mean look how much damage you can do with the hero,” he said, before linking me a Twitter video of him destroying four players on the PTR:

Played Ana for under one hour and she’s already my new favourite hero ???? pic.twitter.com/d0jm2Ly9PU

So it’s clear that Ana will make an impact, at least at the highest level of play. But how will that shift Overwatch’s current metagame? That’s a tough question to answer while she’s still on the PTR, before anyone has ever used her in an official game or even practice session. But Overwatch’s top players are already planning how to best utilize their new tool.

One of the most exciting things about Ana’s kit is that she brings tools to the table that make Mercy and Lúcio less mandatory, which is one reason why a hero like Zenyatta had trouble breaking into the lineup over the past eight months. In the current metagame, Lúcio’s Speed Boost and Mercy’s Resurrection are essentially the only ways to deal with certain dive compositions and combo ultimates respectively. Ana will now give teams another option while also bringing some more flavor to the via damage and her powerful ultimate, Nano Boost.

“I think [Ana] will be used to counter dive comps by just outhealing everyone and sleeping easy targets,” Grego explains. “Can probably make her work on almost any comp. I wouldn’t be surprised if we saw triple support as well, the fact that her bomb increases healing is huge and makes other supports that much more impactful.”

Likely included in a future patch alongside Ana will be buffs for another support, Zenyatta, who has received some major changes on the PTR. With more health and better output with his ultimate, the robot monk could enter pro lineups as a hybrid support and DPS. Combined with Ana, who also dishes out significant damage and buffs up Zenyatta’s healing, lineups featuring Ana, Zenyatta, and either Lúcio or Mercy will certainly see plenty of testing by top teams.

“I know Adam’s Zen is sick too so I’m excited to see if Zen/Ana/Lúcio could be a thing,” Grego said. “I have a feeling Ana/Lúcio/Zen could be the new meta depending on how prominent resurrection is in the next patch.”

Kruise certainly believes that triple support lineup could be viable, considering Zenyatta is essentially a second carry. “Hard to say without trying it but I do think [Ana] will be used a lot,” he said. “Her ultimate seems so strong for breaking any defence. Triple support could be a thing for sure because Zen is actually a DPS hero at this point; with 200 HP and the damage he deals, it’s hard to say he’s not.”

One reason why Mercy and her Resurrection is so prominent is that it’s the only way to effectively “counter” team-wiping ultimate combos. If your team gets hit by a Graviton Surge and Rocket Barrage, Lúcio’s Sound Barrier or Zenyatta’s Transcendence won’t save the team, so the only way to survive that fight is to bring those dead bodies back to life with Mercy.

On the PTR, though, Zenyatta’s buffed ultimate, which now does 300 HPS instead of 200 HPS, may be enough to keep the team alive, certainly combined with Ana’s Biotic Grenade doubling that output. Even Lúcio’s Sound Barrier may be enough to save the squad, if combined with a Biotic Grenade and an Amped healing boost. That means Mercy’s Resurrection may not be as mandatory, opening the door for a more active support lineup.

Both players feel two support lineups with Ana in the other slot could end up viable, but it’ll take some actual testing to figure out what really works.

“Between Zen and Mercy you’re just trading damage for survivability,” Grego said. “I think with certain comps too where they rely around [Winston]/Reaper engages will not need a Lúcio and maybe instead you could see an Ana in his place.”

Of course, at this point it’s all theorycrafting. Ana isn’t on the live server, and Blizzard hasn’t revealed exactly when she will be. But when she does go live, we’re going to see a big shift in how teams play Overwatch. And it’s been a long time coming.

The last time a new hero hit Overwatch was Nov. 2015 at BlizzCon, when Genji, Mei, and D.Va entered the lineup. We’re finally getting the 22nd entry nine months later. Based off reviews from the pros, it was worth the wait.