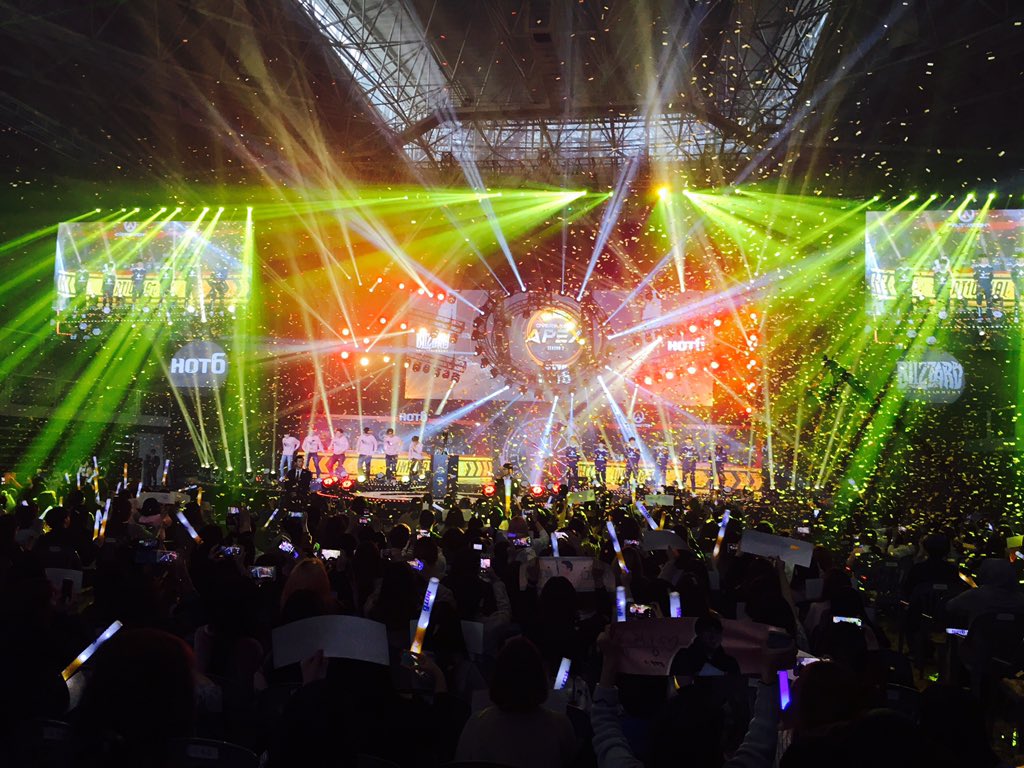 All screen captures via OGNGlobal

The second season of Overwatch APEX was one for the history books. It produced hours of highlight footage, fascinating stories, and crowned Lunatic-Hai as champions. Amid some of the best Overwatch ever played several stars emerged head-and-shoulders above their competition.

Now that we’ve had a minute to breathe after the epic grand finals, we wanted to take the time to recognize the best and most consistent performers in the league, players whose seasons deserve to be immortalized. 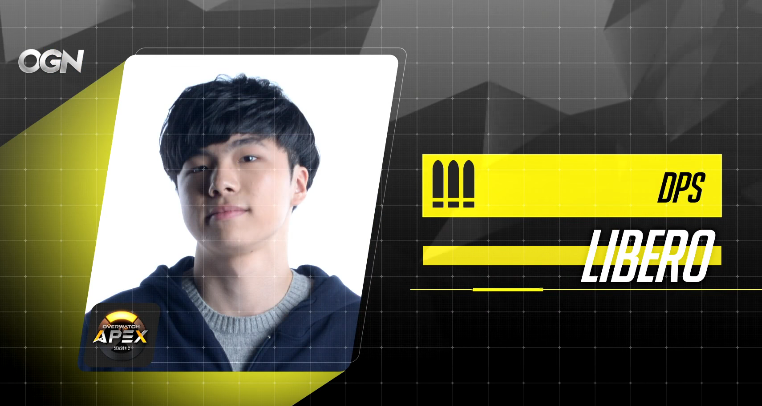 One of the most flexible players in the world, Meta Athena’s DPS player Kim “Libero” Hye Sung seemed to be on a mission to play every hero in Overwatch. He managed to fit in 13 different picks this season. From defensive off-tanks to carry DPS, he played whatever was required to enable Meta Athena’s crazy strategies.

Libero has put on the most impressive Hanzo plays of the tournament and proved himself to be a top-level Pharah and Genji. But what makes him the best DPS player of the tournament was his ability to step into a primary or secondary carry role when needed.

Heading into the playoffs, Meta Athena’s traditional primary carry Choi “Hoon” Jae Hoon’s aggressive style of Zarya play was no longer as effective due to patch changes. So as Hoon stepped back and focused on playing the more defensive D.Va pick, Libero compensated for the missing damage.

While he lacks the raw carry power of many more Genji focused players such as Hwang “Flow3r” Yeon-oh, Kim “Haksal” Hyo Jong, or Lee “Whoru” Seung Joon, Libero requires so much less resources from his team while still offering huge game impact. 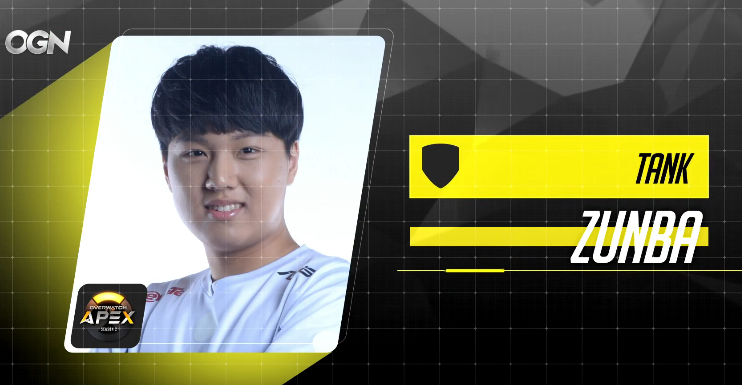 As Lunatic-Hai went about their rebuilding process in between seasons of APEX it was clear they lacked a top-tier Zarya player. And in order to play the aggressive dive style they wanted, they required some of the defensive utility.

They chose to bring on Kim “Zunba” Joon Hyuk, formerly of Conbox T6, whom several members of Lunatic-Hai had played alongside in the Overwatch World Cup. He was, and is, widely renowned as one of the top Zarya players in Korea.

Zunba never had the carry power of someone like Hoon or Shin “Bernar” Se Won, but his defensive mindset was exactly what Lunatic-Hai needed. His shield timings allowed his dive-prone allies to attack even harder.

But what made Zunba the best flex player in the tournament was his ability to counteract the enemy dive. During the group stages he shielded his Ana player, Ryu “Ryujehong” Je-hong, with Zarya bubbles. Later in the playoffs Zunba had the uncanny ability to be by Ryujehong’s side on D.Va, holding his defense matrix around his support player to protect him from harm.

Zunba is likely the best defensively minded flex tank player in the world. The level of protection he affords his allies is shockingly consistent and no matter who you paired him with, they would look like a bigger star than they are. 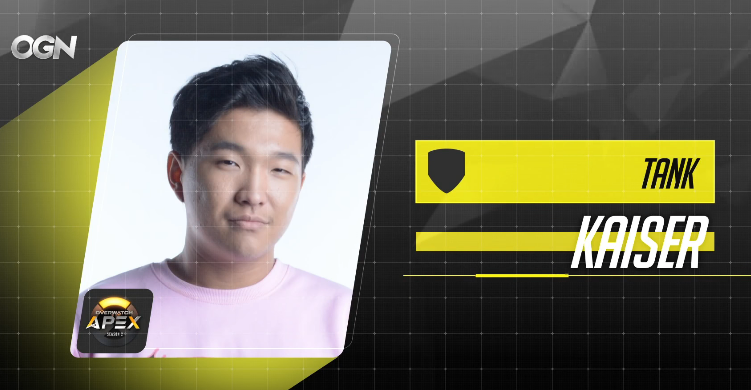 The emergence of Ryu “Kaiser” Sang Hoon as one of the preeminent Reinhardt players in the world was sudden. In the time between RunAway’s group stage matches and their quarterfinal games, he found another gear.

That isn’t to say during groups he was bad, but he was not the star player we now know. During the playoffs he played a best-of-five series against both Song “Janus” Joong Hwa of LW Blue and Lee “Panker” Byung Ho of Kongdoo Uncia.

Before Kaiser proved himself to us, Janus and Panker were the two Korean Reinhardt players on everyone’s mind. Kaiser saw the challenge placed before him and defeated them both. And when Gong “Miro” Jin-hyuk was forced to match him Reinhardt for Reinhardt, Kaiser demolished him.

He consistently hit massive Earthshatters in high-pressure moments. Jumping around the enemies Reinhardt shield to devastate them and enable RunAway to win series deciding fights.

Without Kaiser at the level he sustained over the playoffs, RunAway would not have made it nearly as far. He went toe-to-toe with the best Korea had to offer and came out on top making a definitive claim to the best main tank in APEX, if not the world. 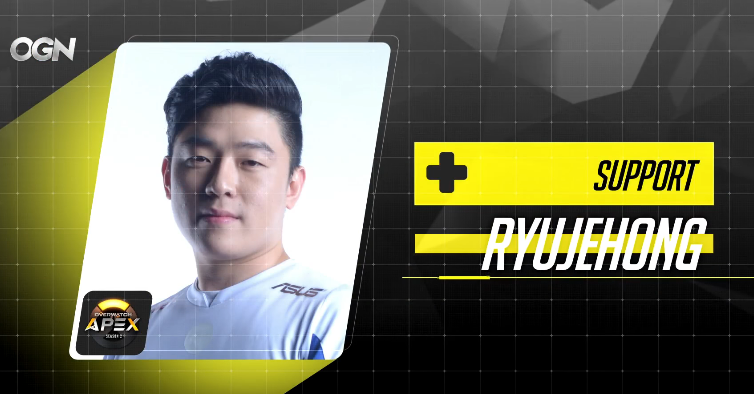 It doesn’t matter what you need your Ana player to do, Ryu “Ryujehong” Je-hong can do it. Reliably sleep dart key targets? Win duels and escape two-versus-one situations? Coordinate biotic grenades to aid his diving allies? Check, check, and check again.

Perhaps it shouldn’t be a surprise, because Ryujehong specifically dedicated himself to Ana. He was formerly a flex player for Lunatic-Hai until Ana’s release, where he decided to change to support solely to play her.

While at times his title of best Ana in the world has been challenged by players like Sebastian “Chipshajen” Widlund, Ryujehong has yet to meet his match. His mastery of Ana’s kit is unrivaled and his accuracy puts many DPS players to shame. These factors allows him to push her limits beyond what many thought were possible.

This season he’s proved that skill can transfer to other heroes as well. In order to better fit into Lunatic-Hai’s dive-heavy system he played a significant amount of Zenyatta. He marked critical targets with discord orbs and saved his allies with Transcendence.

Not a single support player came close to the level of skill Ryujehong showed in APEX and his ability to reliably counter the enemy Ana player’s Nano Boost with his own sleep dart puts him as the clear best support in APEX.

Rookie of the season: Libero

This was a difficult choice to make as there were a multitude of excellent candidates including Libero’s teammate Hoon and Hwang “Flow3r” Yeon-oh of LW Blue.

But what puts Libero over the top of both of these options is his consistency over the duration of the season. Flow3r’s performance dipped during the playoffs, and Hoon’s Zarya was unable to thrive in the D.Va heavy meta.

The other notable breakout rookie DPS player this season was Lee “Stitch” Choong Hui of RunAway. Stitch’s performance was undeniably good but what holds him back is his lack of variety. Stitch played 80% of his time on just three heroes while Libero spent 81% of his time across five.

Libero was also able to provide a higher game impact. Stitch had consistent pressure on his enemies on Tracer, but Libero proved himself capable of carrying entire maps on the likes of Hanzo.

Ultimately Libero stands apart and is deserving of the title rookie of the season.

We may be beating a dead horse, since Ryujehong already won OGN’s official MVP title. But there really is no other option.

Ryujehong was the most explosive playmaker in the league and it felt like every sleep dart foiled the plans of his enemies. The two primary contributing factors to Ryujehong’s MVP title, however, are his consistency and how critical he is to his team’s playstyle.

Unlike many other star players in APEX like Hoon or his teammate Miro, Ryujehong never had a bad series. He was often making critical plays for Lunatic-Hai to always be contesting for map wins.

You could, in theory, replace Kaiser with another top Reinhardt and RunAway would be able to function in much the same way. But Lunatic-Hai without Ryujehong simply would not work.

In order to enable Miro’s Winston play, Lunatic-Hai needs another reliable way to defend against enemy ultimates besides Reinhardt shields. This is where Ryujehong steps in with the best sleep dart usage in the world.

Ryujehong’s playmaking is a driving force allowing Lunatic-Hai’s style to succeed and he is the clear choice for most valuable player.

All statistics taken from Winston’s Lab.