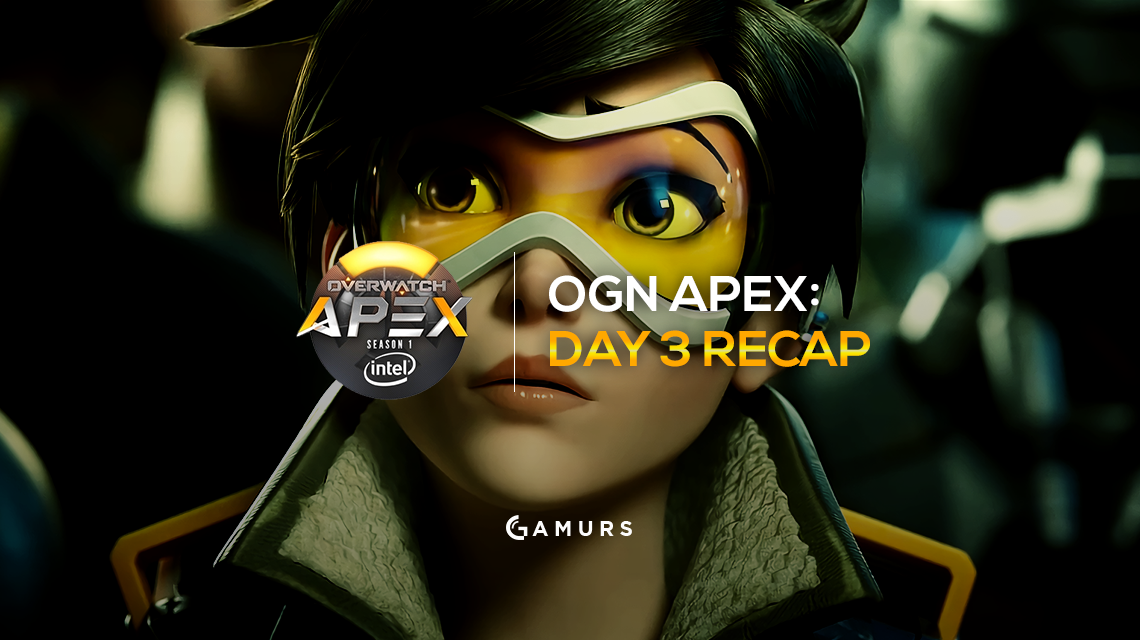 The final day of the Apex league group stages took place this morning. This first series was between Lunatic-Hai and Mighty Storm, a match that seemed to have an obvious winner and little playoff implications, whereas in the second series between Runaway and Kongdoo Panthera, everything was on the line for the playoffs seeding in Group D. To cap it all off, the largest patch to date was released last night, and sadly was going to affect today’s games.

In case you missed any of today’s action, we’ve got you covered with our recap.

As usual, the series kicked off on Nepal: Village, and the new patch was clearly in effect already. Both teams were running a Solider 76. Mighty Storm ignored the high ground in favor of control of the point and took the initial capture. Yyoshi and F3lho combined their efforts for a beautiful Graviton and Rocket Barrage combo that wiped out Lunatic-Hai and allowed Mighty Storm to continue holding the point. But the new ultimate timing meant that Mighty Storm now didn’t have their ultimates, and quickly lost control to Lunatic-Hai. Both teams struggled with the new ultimate mechanics, trading the point back and forth, with Mighty Storm eventually taking the win.

On the second point of Sanctum, it was Lunatic-Hai who took the initial control. Mighty Storm fought back hard as Jack on the new Soldier showed his prowess as he output an incredible amount of damage. The point was captured by Mighty Storm as Yyoshi was about to significantly outpace Dean’s ability to charge Graviton Surge. But Esca on a Soldier of his own took the Nano Boost and was able to clean out the point for Lunatic-Hai, meaning that we had to go to a third point to decide Nepal.

For the decider the series went to the final map of Shrine. The map was incredibly close with both teams getting over 75 percent capture. The momentum stayed slightly in Lunatic-Hai’s favor as they displayed their superior individual skill as they won fights without ultimates. Esca, in particular, once again took the Nano Boost on his Solider to clean up the final fight, showing off mastery of a new hero pick. Lunatic-Hai took the map 2-1, and the series lead 1-0.

As we moved onto the hybrid map of King’s Row, we saw Tobi doing his best HarryHook impression as he abandoned his Lucio in favor of Soldier 76. Lunatic-Hai ran a solo support composition with two self healing damage heroes, Soldier and Roadhog. Mighty Storm put a large focus on diving Tobi in every fight, which left Esca on McCree free in the back lines to play janitor and clean up the fights. Mighty Storm was unable to find any purchase on the point, and was full held at point A.

Now all Lunatic-Hai had to do was capture a single point to easily take the map. Miro picked up Dva as the primary tank and was an absolute hero. He used the rocket boosters and defense matrix to stay alive and bounce his foes around. It opened up space for all of Lunatic-Hai to freely fire upon Mighty Storm and take a convincing team fight. The following zoning kept Mighty Storm away from the point, securing an easy map win for Lunatic-Hai.

Lunatic-Hai was now on series point, only needing one map to secure their place atop their group. For Mighty Storm’s assault map choice, we went to Temple of Anubis, a bold choice considering the prowess Lunatic-Hai has demonstrated on the map. Obviously Mighty Storm had forgot, and Lunatic-Hai quickly reminded them. Miro’s creative positioning confounded Mighty Storm as he constantly disrupted their back line. Even when they did manage to deal with him, Esca and Ryujehong were still cleaning up. Even Tobi on Lucio managed to pick up some double kills. It was a crushing hold from Lunatic-Hai in which they fully held Mighty Storm, meaning they once again needed only a single point to take the map.

On Lunatic-Hai’s offense, they were taking some liberties and having fun. Esca played the first competitive Sombra and to not much success. He lost three duels to Sip’s Ana and failed to impact the match. In addition, their best Ana player, Ryujehong, was playing Dva. Lunatic-Hai continued playing their suspect composition, which included a Widowmaker/Mercy combination, until there was just a minute left, making this map closer than it needed to be. They changed up their picks to a more standard team and quickly captured the point, taking an easy 3-0 in the series.

After the quick first series that took under an hour, we now hit the one we all wanted to see. If Kongdoo Panthera managed to take the series, then Runaway would be eliminated from the playoffs, which would mean Reunited would exit as the first seed, and LW Blue in second. If Runaway took the series 3-0 or 3-1, then they would exit the group as the first seed while Reunited would take second place.

However, if Runaway took the series 3-2, then we would have a three way tie between them, Reunited, and LW Blue. This tie breaker would be unable to be broken by point scores as every team would be equal. Head-to-head would be equally useless as the three teams beat each other in a rock, paper, scissors type circle. So we would be left with playing round robin best-of-threes on Nepal to determine the seeds. These round robins would have to continue until one team went 2-0, another 1-1, and another 0-2, potentially leaving us with several more matches tonight.

Hoping to secure their spot and avoid a messy tiebreaker situation, Runaway returned to the map we first saw them destroy Reunited on, Ilios. On Ruins, Haksal for once actually abandoned his Genji in favor of Pharah, but to no avail. Kongdoo Panthera quickly picked off the supports of Runaway to take control, and they simply never gave it up. They used their own Pharah to zone out Runaway and take the point 100-0.

Now we moved to Lighthouse, and Runaway found the start they needed, taking the initial team fight cleanly. It was to be short lived, however, as Haksal spent his time chasing down Panthera’s PharMercy combo and he failed to kill either one. Runaway reminded us they have no other carry threats and they were unable to accomplish anything for the rest of the map. Panthera took an easy victory on Illios, and the series lead 1-0.

For Runaway’s map choice, they took us to Hollywood, perhaps in an attempt to go to a less common map to shake up their foes. Completely unperturbed, Panthera returned to their comfort comp with triple tank, this time with Solider 76 as their hitscan. But Runaway was ready. They brought Zenyatta and his Discord Orb to allow their Reaper and Soldier to easily shred tanks, which gave them a quick first point capture. They were stalled temporarily in the streets phase, but some excellent Discord Orb placements from Runner meant that they continued to shred everyone in their way. Runaway’s momentum was unstoppable as Quad finally stepped up as a damage threat, and they finished the map with just under two and a half minutes to spare.

Panthera was now under serious threat of losing their series lead. Luckily for them, Runaway took a foolish position in Cafe that allowed for AOE of their Pharah, Winston and Zarya to dish out damage, only to allow Rascal’s Genji to get resets. They quickly captured point A, and pushed through the streets without too much effort, leaving them with four minutes to complete the studio. They quickly took the fight off the back of an excellent Resurrection from Bishop and the cleanup from Rascal’s Genji. Runaway stalled for a while, but Panthera managed to finish with 2:46 left, just 18 seconds more than Runaway.

As we went into the second round of attacks, we saw Panthera go for a similar defensive hold to Runaway, holding in Cafe. However, Evermore, on his famous Roadhog, held a flanking position and eliminated Runaway’s Ana player Shine. Runaway was stalled until there were 40 seconds left, and Evermore was the deciding factor in stopping their push. He nailed a hook onto Quad’s Soldier 76, which forced Runaway to commit to the fight in order to save him. But it was an overcommitted assault, and they got crushed under the ultimate lead Panthera had. As such, they were fully held at point A.

Now Panthera just needed to take a single point to put themselves on series point. They failed the initial assault but quickly returned with a vengeance. WakaWaka’s Pharah did an incredible amount of damage, which allowed Rascal’s Genji to get resets and build his ultimate. That Dragonblade eliminated Quad’s Soldier and opened the path for Panthera. The point was quickly captured, and the map went in favor of Panthera.

Now Runaway was down 0-2, so their best case scenario was the messy tie breaker matches. But to get there, Runaway would need to completely reverse sweep the series, and with the strength and newfound versatility Panthera had found on the new patch, it didn’t seem likely.

Once again tonight, the assault map was Temple of Anubis. Runaway began on offense, and Quad found an open flank to sneak onto the high ground around point A. From his newfound perch, he fired freely and forced Panthera off the point as they took a quick capture. But the ultimates Runaway committed to taking point A meant that Panthera now found themselves with the lead. Haksal seemed frustrated by their inability to take the second point and he constantly changed heroes. With the new ultimate changes it meant that Haksal was willingly giving up his hard earned ultimate charge. It was a free tempo loss, and Kongdoo Panthera managed to hold the second point.

Now Panthera only needed to finish the map in order to take the series, and actually place above Runaway to avoid playing in the relegation tournament. After losing one fight, Panthera never looked back. Rascal crushed Runaway at point A, WakaWaka hit every rocket at point B, and Bishop’s Resurrection foiled Runaway’s retake attempt.

It was a clean 3-0 victory for Panthera, preventing Runaway from making the playoffs and they actually forced Runaway all the way to the bottom of Group D. This means that Runaway will have to fight for their spot in the Apex league, potentially having to face the terrors of LW Red or Afreeca Red.

How do you think the playoffs will shake out? Comment below or tweet your answer to us @GAMURScom.