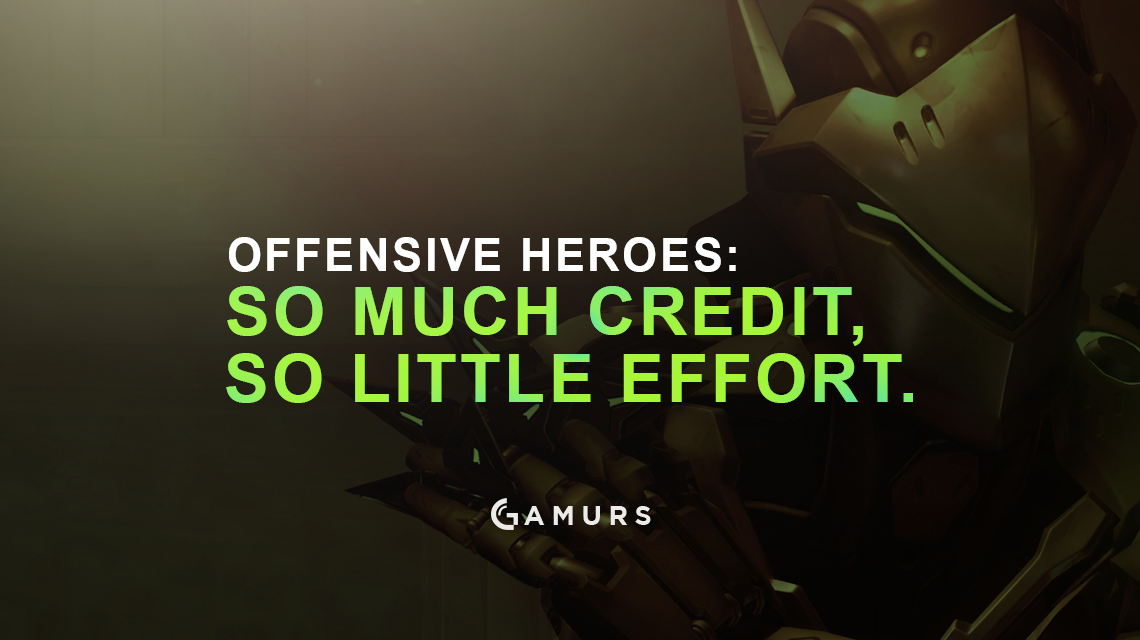 Players love dealing damage. While some find solace in being tanky, some in aiding allies, we all enjoy watching our enemies health fall. Especially when watching competitive Overwatch games, we experience massive emotional spikes when damage focused ultimates get fired off. Whose heart doesn’t skip a beat when Soon drops into his opponents on Reaper to Death Blossom? Or when Haksal draws his Dragonblade?

Offensive play is more exciting to watch. Reinhardt putting the hammer down is much more exciting than watching him stand still to shield a Bastion. Simply put, the heroes in Overwatch that are categorized as “Offense” spend more time playing offensively, and are more entertaining to spectate. Due to how exciting the big plays from offensive heroes are, it becomes easy to focus on them and notice their impact on the game.

Their kits excel at maneuvering around fights, dealing as much damage as possible. But outside of their mobility, with a few exceptions, they lack defensive options to keep themselves alive or the utility to support their allies. Offensive heroes are reliant on their allies playing tanks and supports to bring those attributes to the team. As such, we’ve never seen an all offensive heroes meta, and this is a key point in this discussion.

It’s this reliance that actually makes offensive heroes the easiest to play from a decision making standpoint. But despite being simple to play, their impact on the match is the most noticed, and a disproportionate amount of credit is attributed to them.

In order to establish common ground for the discussion of offense heroes in Overwatch, I’m going to lay out some fundamentals of the class and how they are used. If you missed my discussion on supports and tanks, it can be found here. But if you’re more interested in learning about defensive heroes, you can read more here.

But Elbion, you just said offensive heroes are reliant on their teammates? Why not play something that can make plays solo?

Well you’re not wrong. It’s why I say play Roadhog to climb. But offensive heroes do have a purpose. Think of an offensive hero as a firehose. A firehose will spray water no matter what, and could very well put out the fire on it’s own. But think of the firemen as the support and tank players. They bring the firehose to the fire and aim it, enabling the firehose to do it’s job better.

Basically, offensive heroes work best in a team rather than alone. But so does every hero in Overwatch; it’s a team game. But offensive heroes are even more reliant on their allies to be set up for success.

Supports and tanks can still deal damage. In some cases, like Roadhog or Zenyatta, they make excellent damage dealing choices. But in the case of Roadhog, he provides map control with the threat of his hook. And as for Zenyatta, he provides healing and damage boosts.

But the offensive heroes tend to bring just damage. Yes, McCree can stun people, but that is far from being as impactful as a Graviton Surge. Of course, Solider 76 can heal, but Lucio’s AOE is still stronger. Outside of these exceptions, the abilities offensive heroes have are generally either focused on damage or movement, not team utility.

So in such a team-play focused game like Overwatch, why play offensive heroes? Well, for a brief period, we hit a meta where offensive heroes weren’t played, as discussed here. However, now players are remembering that with proper effort, a supported offensive hero becomes a powerful force.

Offensive heroes deal damage, that much we’ve established. But the enemy can deal damage as well, and this is where tanks step in to do their job of setting up their DPS players. As I discussed previously, the primary job of a tank player is to create space for their allies to function in.

The simplest example isg Reinhardt throwing up his shield to allow his allies to fire from safety in what would normally be an exposed position. A less obvious example is Winston or Dva diving into the enemy team to draw focus, giving time for their DPS to fire freely. The least mentioned way a tank can create space is with crowd control. Earthshatter and Graviton Surge provide DPS heroes with adequate space to dispatch their foes in safety.

Instead of focusing on creating space, supports are enablers, as I’ve discussed previously. They do not add new capabilities to their allies, but instead amplify them. Lucio allows anyone to reach the backline with speed and shields. Mercy and Symmetra can minimize the impact of death. But the most obvious example is healing, which allows DPS players to trade damage without lasting consequence.

In general, supports reduce the risk their allies take when attempting to make plays, and tanks create more opportunities for their allies to make plays. Load this combination of powder and ball into the cannon and you’ve got a powerful weapon. In more plain words, Nano Boost a Reaper when your Zarya fires her Graviton Surge and you’ve got a recipe to enable that DPS player to succeed.

Of course, the Reaper could drop in alone and still cast Death Blossom, McCree could channel Deadeye looking for kills by himself, or Genji could dash into melee range without backup. The consistent weakness offensive characters have is that when they are using their most powerful damage options, they are vulnerable. McCree basically can’t move while Pharah literally cannot. Also, Reaper and Genji become easy targets at such close ranges, easily stopped with crowd control.

But with Lucio or Ana, the offensive hero becomes more mobile and harder to kill. With Zarya, they become immune to crowd control. In order to maximize the damage output of a hero, they need to be able to play what would be otherwise considered reckless, ignoring what their enemies throw at them because they have the protection of their allies. This is a situation where the offensive hero is only able to be as effective as they are because of the effort their allies put into protecting them, only for the offensive hero to receive the credit.

It’s easy to focus in on the big combo moments, especially when the whole team works together to set up their DPS player for the big multi-kill. But even in the more mundane moments, offensive heroes are reliant on their allies to put them in advantageous positions.

While trading damage, it’s a must for supports to heal their allies so they do not fall, and for tanks to block the high damage fire, like Pharah rockets. But what’s becoming a more common occurrence is that offensive heroes are reliant on Mei using her wall to separate the enemy.

Mei can split the front line away from their healers so they can be focused down, or separate the softer enemy targets who can be killed quickly without their tanks protecting them. This is an easy way for the Mei player to set up kills for her team, and a situation that requires little effort from the offensive player. The Mei is the one who made a play, the offensive player simply cleaned up and likely received credit for the kill.

Now at this point, I’ve probably upset some players who focus on offensive heroes. I’ve said that offensive heroes are easier to play from a decision making standpoint and that they are reliant on their allies. I’ll happily stand by both statements, as they are fundamentally correct. Being reliant on teammates is obvious, as Overwatch is a team game, and every hero in the game reaches their highest peak with ally help.

But the statement that offensive heroes are easier to play from a decision making standpoint might really put some people off. But once again, I’ll tell you it’s true. An offensive hero is tasked with dealing damage and staying alive. They are not tasked with healing their team or protecting them. When it comes to large scale fights, they must focus on where their enemies are in order to kill them.

Tanks must be aware of their allies, as well as shielding them. Supports have to flee from any attackers while also attempting to maintain the health totals of their allies. Both classes have to change their mindset if the fight begins to go in their favor, as now they can be more aggressive and chase down their foes.

Regardless of how the fight progresses, the job of offensive heroes remains the same: deal damage and stay alive. The thought process is more linear, and because of that, requires less effort to understand. However, I will never say that offensive heroes are mechanically easier, and now we get to see the way DPS players separate themselves as the best.

As the title of this section suggests, aim is now key. Tracking opponents is simply more difficult than vaguely pointing in your allies direction with Mercy to heal them. Executing animation cancels on Genji to burst your enemies is simply harder than placing a targeted shield as Zarya. These skills must be mastered by the offensive player, or all the protection and healing in the world won’t mean a thing.

Offensive heroes have a simple purpose in life: to deal damage. However, in order to excel at this job, they must be protected by tanks and enabled by their supports. They lack the tools in their kits to set up their own plays, and as such, are reliant on their allies to help them. But even with an infinite amount of help, in order to eliminate their foes, they still must hit their shots.

Offensive heroes are given so much credit for their kills, while so much of the effort was done by their tank and support players. We should credit the offensive player with hitting the shot, or often times just pressing Q. But don’t forget all of the hard work put in behind the scenes.

Who is your favorite offensive hero in Overwatch? Comment below or tweet your answer to us @GAMURScom.