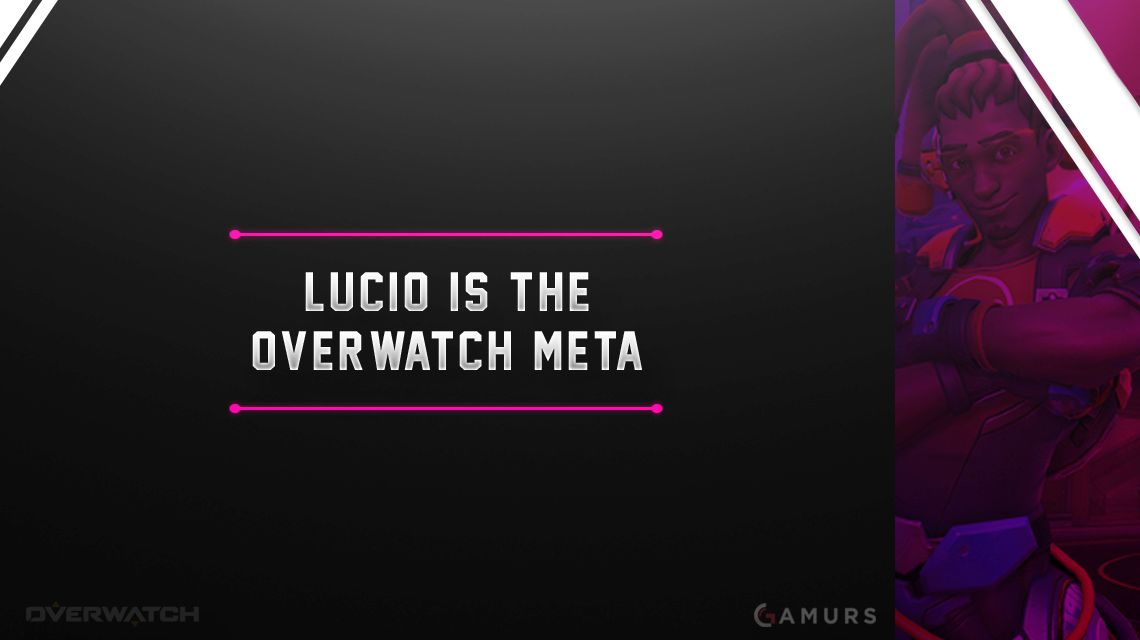 Likening Lucio’s playstyleto that of a conductor feels like an apt metaphor. The smoothnessof his motion, the ability to bring out the best in his orchestra,or in the case of his teammates, and of course his music. Lucio isa conductor who puts the other members of his team on display,simply being an enabler for his allies to seek glory.

Lucio still takes a fair shareof the spotlight for himself. He has defined the professionalmetagame better than any other hero for a reason that is bothobvious and difficult to explain. Simply put, Lucio has the mostpowerful hero design in the game; a design filled to the brim withraw power while retaining extreme flexibility. Lucio is a hero whobrings music to all.

Supports being combat worthy isnot a new concept, especially in this Zenyatta meta. But whereasZen fights with a maul dealing crushing blows, Lucio wades intobattle armed with a rapier and fights with more finesse. His leftclick is an odd delayed four shot spray with long travel times.Using the delayed pattern of fire, Lucio can start firing frombehind cover and quickly peek a corner, allowing two or three shotsto get downrange in safety. When you also acknowledge that Luciodoes not suffer damage falloff at any range, you realize that Luciocan contribute to harassing the enemy at any distance which allowsfor quicker ultimate charging.

However, the main two parts ofhis kit that make his combat involvement so unique is his rightclick and passive. His alternate fire so lovingly nicknamed “TheBoop” pushes back all enemies in front of him several meters. Ofcourse, we have all seen the highlight clips of Lucio playersknocking entire teams off the ledge, and yes, it can be used forenvironmental kills, but the more consistent use is to createspace. When used against enemy tanks like Reinhardt or Winston whofind their way into the backline, it can allow Lucio’s alliesto escape the range of their weapons and further exploit anymobility they have.

Lucio’s skates characterize hismovement. He does not stop immediately and instead glides to astop. But much more interestingly and perhaps illogically, theyallow him to run along walls, slowly ascending as he goes. On manymaps, this allows Lucio to escape from less mobile foes or bringhis auras into battle with his allied flankers. Notable on manyking of the hill maps, this skill allows him tocontinually contest the point while rapidly moving at oddangles to survive, possibly extending overtime or simply healing abit more.

His combat is much safer thanother supports. Able to shove away or evade threats, Lucio requiresless assistance from his team to survive, allowing them to focus onmoving forward.

They say music heals the soul,but Lucio takes it a step further. Healing is an absolute necessityin Overwatch. The ability for a character to attempt a frag, takedamage, and have their mistake erased is immensely powerful. Luciojust happens to be one of the best at this.

However, the primary strength ofLucio’s healing is that it happens passively. The Lucioplayer does not have to stop firing at his foes to target allies toheal. Instead, the player can switch to or amp up their healingwithout ever interrupting their firing with other animations. Thisallows Lucio to approach a much more ideal balance of damage andhealing than other supports, notably Ana.

Unlike Lucio’smultitasking ability, Ana has to interrupt her damage output toheal her allies either by shooting them or throwing a BioticGrenade. The obvious benefit is that Lucio gets more uptime on bothhealing and firing than Ana. However, the forgotten benefit is thatit allows a skilled player extra awareness of the game. Lucio cankeep his attention on the positioning of his enemies more than anyother healer, who also has to be aware of where their allies are toheal them. Putting more mental ram into where his aggressors arealso contributes to Lucio staying alive longer than mostsupports.

Name a single team game wherethe ability to move faster than your opponents is not useful. Goahead. Seriously try and think of one. Moving faster than yourenemies can grant you favorable map positioning and increase thetime you have to react to incoming fire. Conveniently, Lucio hasthe ability to speed up all nearby allies if he chooses to quithealing, boasting a 30% speed increase when he toggles to speed andamping up to an unbelievable 112% increase.

Lucio’s ability to speedup his allies is easily the most powerful ability in the game andhas always been a defining factor in the meta of Overwatch. Beforethe hero limit was enacted, teams ran two Lucios to extend theduration of their speed boost. When Widowmaker rained death fromher perch, teams utilized Lucio to close on her and bring her down.Now, teams add Lucio speedboost onto their diving Winston for himto wreak havoc on the enemy backline, while the DPS players surgeforward to clean up.

Lucio’s movespeed boost isthe ultimate enabling ability. It enables divers like Winston andGenji to reach their targets in the backline significantly easierand counteracts the slow Deadeye places on McCree, allowing him toposition properly in order to eliminate as many foes as possible.But even scarier, it allows a team who begins winning a fight tochase. McCree now is able to run into range to flashbang. Reapereasily reaches an optimal distance for his shotguns to rip foesapart. Picking off stragglers at the end of a fight is a key factorin snowballing a game as it extends the time your enemies areforced to play at a man disadvantage.

Perhaps the single most powerfulfactor of his speed boost is the ability to neutralize positionaladvantages held by defenders. Generally in Overwatch, the defendingteam is given time to establish the positions they want to holdfrom, usually on high ground. What Lucio enables his team to do isclose onto the opponent’s much quicker, thereby mitigating theadvantage gained by holding defensive positions.

The ability to so rapidlyapproach the defending team is a primary reason why the meta isshifting towards favoring the attacking team. The threat of aWinston boosted by Lucio speed, Zarya shield, and Zenyatta healingforms a highly mobile damage dealing machine.

So much of winning an engagementcomes down to which team coordinates around their Winston divingbetter. This dive meta only facilitates clean up heroes who arerequired to push the advantage after an initialengagement. Lucio’s speed boost enables both thedivers and the clean up teams to excel at their jobs. But, thismovement speed is just one component of his enabling.

What do all meta supports inOverwatch have? The initial answer is often healing, but Symettrais an example of a support kit that can succeed without healing.The correct answer is an ultimate that counters enemy aggression.Symettra teleports you back to the fight, Mercy does not let heroesdie, Zenyatta heals his team faster than any other ability in thegame, and Lucio drops the beat.

Lucio’s ult needs morecharge than any other hero in the game, but the effects are quiteprofound. He shields all nearby allies for 500 health, up to atheoretical maximum of 3000 health in shields. However, the shieldrapidly decays over a period of six seconds, so in practice, youshield much less than 3000. But, the resulting shield covers a keyweakness in team compositions today.

Zenyatta ultimate allows yourteam to survive almost any sustained DPS, but still allows forplayers to get one shot by Self Destruct or Deadeye. However, theextra raw health provided by a Sound Barrier covers that weaknessand when the two ultimates are combined, your team is nigh oninvincible.

The ability to tank oncomingdamage combined with Lucio’s speed boost further enables thedive meta, especially for Genji, who lacks the natural health poolof Winston and Dva. He has the mobility and damage to reach andkill the backline, but often suffers from being focused downquickly. When powered up by Lucio, Genji does not have to be nearlyas afraid of his opposition and can lead the charge with a DragonBlade like we see Shadowburn do so often.

Lucio’s kit is overflowingwith power. Like all good support heroes, he heals, but he is somuch more than a healbot. He can hold his own in a fight; dipping,ducking, diving, and striking blows. He counters enemy aggressionwith massive shields and facilitates his team’s attack with massivespeed boosts. As long as heroes in Overwatch have flaws in theirkit, Lucio will be needed to mitigate those flaws. His ability toovercome an enemy composition by putting his own team inadvantageous scenarios makes him the most powerful hero in thegame.