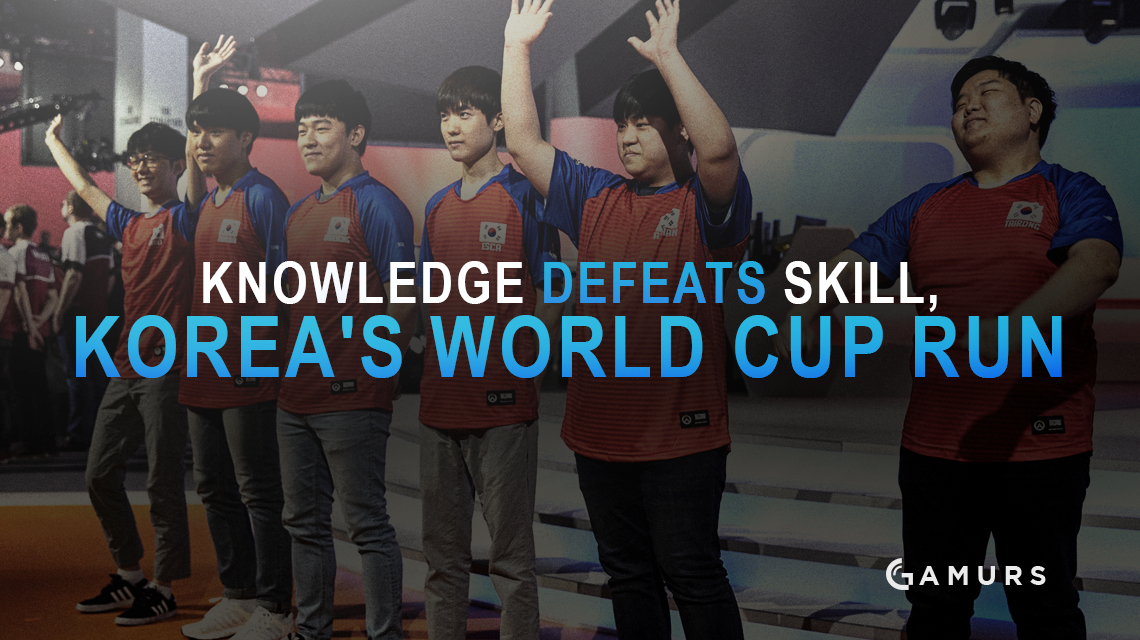 This weekend saw the conclusion of the inaugural Overwatch World Cup. Blizzard put on an impressive event, and we saw the crowning of Team South Korea as the first champions after a completely uncontested tournament run. As always, after such a dominant tournament, the community asks how? How was a mish-mash of players so effective? Was it just a coincidence the Korean team won or was this tournament a look into the future of Overwatch?

Coming into the tournament, many fans were putting their hype behind the European powerhouses of Finland and Sweden. Both countries came into the tournament with incredibly stacked rosters, studded with star talent. Even in the video features Blizzard produced on each team, they hyped up the Nordic teams, going as far as to call them the favorites.

But when it came to the South Korean team, it felt like the community was discounting them. The same tired narrative that Koreans don’t play FPS games was often cited, and the Blizzard features just said that Korea was simply a team the world respected but not feared. Numerous fans cited Rogue defeating Lunatic-Hai at APAC as gospel, proving that Europe was a stronger region than Korea.

This did not sit well with Korea, and they came to the Overwatch World Cup seeking vengeance for our doubt. They tore through the entire tournament and refused to drop even a single map, sweeping every series despite the uphill battle they faced.

At the press conference after the finals, Tairong, a support player for Team South Korea, told the members of the press that unlike the other teams at the World Cup, they had no practice as a team before they arrived at BlizzCon’s opening week. But despite having less prep time than every other team in the event, they were clearly the best.

The Brain Inside the Machine

Let me clearly state this before anyone puts words in my mouth: Team South Korea did not have pound-for-pound the star level talent when compared to some of the other teams in attendance, especially Sweden. But what every other team was missing was Tairong.

After every series at BlizzCon, the winning team took part in a press conference for the media. All three times Korea was at their conference, Tairong answered nearly every question. Any question directed towards the team in general was answered by him, even some player specific questions were taken by him.

For those who don’t know, Tairong is an Overwatch coach for Afreeca Blue and he’s clearly a confident one. Answering every question thrown his way almost without hesitation, he impressed me. As is the norm in Korea, the players were obviously respectful of their coach, and allowed him to answer questions for them. Even through a translator when he talked about his players and their team, you got the sense that he really understood how to communicate and be a leader for his team.

His confidence as a leader seems to have been crucial in shaping Team Korea, as they were easily the most decisive team at the event, pouncing on every lead they found. But it certainly wasn’t their only strength. The two biggest reasons Korea won this event was the coordination between certain duos on the team and their mastery of core concepts in Overwatch far beyond every other team.

Many comments I heard at BlizzCon dismissed how impressive the teamplay was from Korea because three of their players were from Lunatic-Hai. While true, this view ignores the combinations of players that actually carried this team, none of which play together normally. The analyst desk at the event was mostly focused on Miro and how he was supported by Ryujehong’s Ana. Ryujehong is still the best Ana in the world, but even with a lesser quality Ana, Miro’s playstyle would work.

Zunba’s Zarya was far more important to Miro’s success as it allowed him to dive harder with the additional shield that he staggered with Winston’s own shield to remain invulnerable for several seconds. And at the post finals press conference, Miro was asked how it felt to be the best tank player in the world. He simply replied by saying that if it wasn’t for Zunba, he wouldn’t be up on the winners stage.

The tank duo of Miro and Zunba was an incredibly dominant force in this tournament. Whether Miro was on Winston or Reinhardt, he was nearly always shielded by Zunba, which enabled his aggressive tank play that shut down his enemies supports and created room for the other key duo of Esca and Arhan to work.

Esca normally suffers on his home team of Lunatic-Hai, where his DPS partner is Leetaejun. Esca is a world class hitscan player but is often forced onto Mei because of her power in the meta and because Leetaejun doesn’t play her. Esca excels at Mei, but because of Leetaejun’s failures as a DPS player, Lunatic-Hai often finds themselves dealing very little damage.

But now, when we paired Esca with Arhan, everything changes. Arhan carries his share of the damage dealing responsibilities and adds the missing playmaking potential. Arhan’s Genji is a force to be reckoned with, especially when he dives with Miro. The threat he poses allows Esca time to do work from the backlines on McCree and Mei and allows them to both shine.

The team’s communication on when to use ultimates and their decisiveness on when to engage and press advantages was impeccable. During a post game press conference, Esca remarked that he wanted to bring this roster onto Lunatic-Hai because of how well they worked together and got along. Clearly as a unit, they operated well, but the edge they had in conceptual understanding of the game was what set them apart the most.

Knowing is Half the Battle

Perhaps it shouldn’t be surprising that Korea demonstrated the best conceptual understanding of the game at this tournament. But it was the first time I’ve seen such a strong mastery over some core concepts. Each of these topics is worthy of their own articles, which will be coming, but for now, I’m going to highlight specific instances to show where Korea excelled.

Many fans, casters, and analysts were quick to call out the Torbjorn and Symmetra picks Korea made on Eichenwalde. Some thought the Korean’s weren’t taking the matches seriously, or massively disrespected their opponents. However, it was this strategy that made me realize how completely the Korean team understood the concept of creating space.

Particularly on Eichenwalde around point A, the attacking team must approach through chokepoints. The Korean team used Torbjorn and Symmetra turrets to zone their enemies and make those chokepoints even deadlier. If you slowly push through the choke searching for the turrets and eliminating them, you only increase the amount of time you’re exposed to enemy fire and are likely to get picked off.

So naturally, their foes grouped up and used Lucio speed boosts to simply rush their foes and try to take the fight on even ground. However, Symmetra’s turrets slow movement speed when they target a player. This means that as your backline gets slowed down, your tanks get separated from their healers and can be quickly focused down.

The next trick people tried was to flank the Koreans and attempt to avoid their entrenched defenses. However, Korea was still too smart for this, and they would place the Torbjorn turret to the side of the main choke point. This meant that it could not be destroyed before the enemy pushed forward, even on the flanks. The specific angle the turret was placed at meant that it was able to attack it’s foes regardless of their angle of attack.

So because they were unable to approach the point normally, teams would stall out and default to simply trading poke damage back and forth in an attempt to build ultimate charge. Because of the zone control provided by the turrets, it left the attacking team only a single sight line to work with. Korea knew this, and would bring a hero to dominate that sight line. It was often Arhan on Bastion who used his tracking skills to destroy anyone who approached. In this scenario, Bastion’s low mobility was less of a factor because of the zone control afforded by the turrets.

Korea’s use of off-meta hero picks to zone their enemies and create space for their dps players was unmatched at this tournament. It didn’t always succeed in creating full holds at point A, but it regularly held for several fights and delayed their foes. The creating, and usage, of space was a concept Korea applied against every team they faced, but they also established their ability to pivot depending on their foes.

In a post match press conference, Tairong mentioned that they brought specific strategies for each team, and it clearly showed. Korea was the only team to properly figure out how to counter the playstyle of each team they faced and this was never more evident than in the finals against Russia.

Coming into the finals of the World Cup, everyone was in awe of Team Russia and how well they set up Shadowburn and his Genji to excel. And the community hyped Shadowburn’s skill to where you would believe he was going to be enough to carry Russia. But Korea, specifically Arhan and Miro, had other ideas.

When Finland played against Russia in the semifinals, they incorrectly attempted to hit the Shadowburn problem head on. They tried to catch him out with Sleep Darts, Flashbangs, even Roadhog Hooks. But Shadowburn continually avoided the trouble by either dodging, deflecting, or receiving Zarya shields from his ally Anak. This tactic was repeatedly attempted without success and led to Finland falling to Russia.

When it came time for Korea to battle Russia for the title, they solved the Shadowburn problem not by killing Shadowburn, but by instead removing his support staff. Arhan on Genji and Miro on Winston both regularly focused down the Russian supports before turning to deal with Shadowburn.

This was a notable departure from how the rest of the teams had approached dealing with Russia, and it was clearly more effective. Shadowburn was forced to try and make plays without his healing or shields, and this left him vulnerable. Where previously he would have brushed off enemy crowd control, he now found himself regularly trapped by the unerring Sleep Darts from Ryujehong, only to be bursted down.

Team Russia’s lack of strategic depth became evident as they stubbornly stuck with the same strategy, only to have it defeated once again. It’s hard to hold against the Russian players because they weren’t playing on an established roster, but instead, we should just look at this as proof that Korea was the only team at the event to figure out how to defeat their strategy. It actually reflects worse on every other team that played Russia because they never changed their approach and continually got away with it.

You can make the argument that Korea had the most well-rounded roster at the event, and I would be inclined to agree with you. If you were to argue that Korea had an easy bracket, only having to face Sweden as a top team, I would agree with you as well. However, Korea came and made a statement. They arrived to the World Cup without practicing as a team and swept the tournament without dropping even a single map. They did not come with the most star studded roster, but instead, rode into battle with superior knowledge of the game that overcame any skill deficit and showed the world that they were the best team at the event.

I, for one, welcome our Korean overlords.

Do you think Korea will continue to dominate Overwatch? Comment below or tweet your answer to us @GAMURScom.