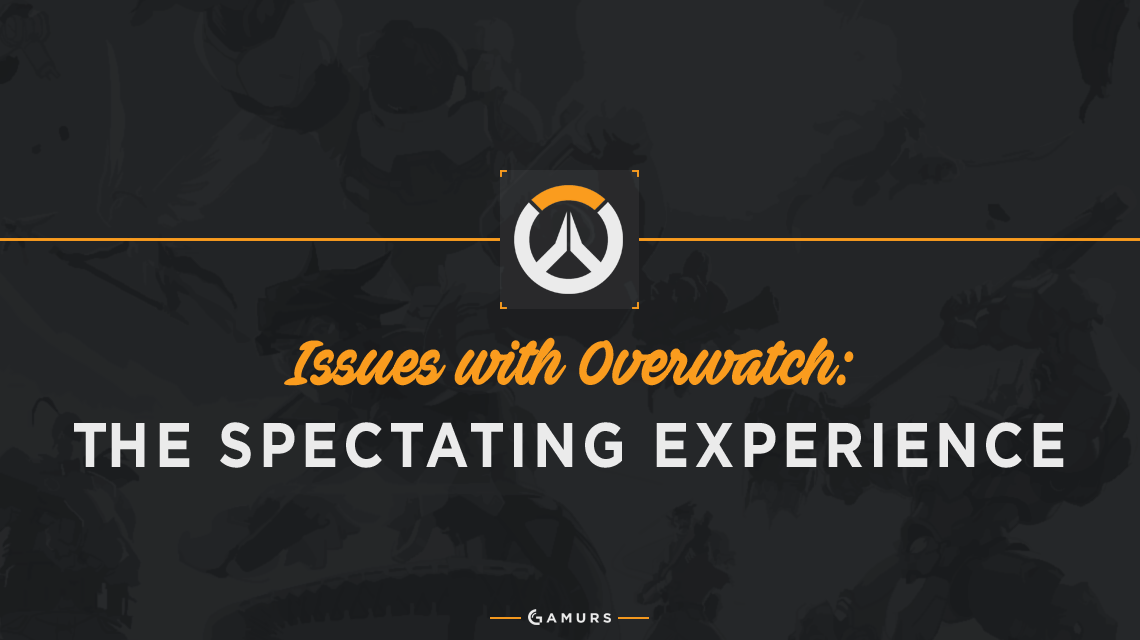 Overwatch has grown. We’re approaching just four months since the game’s official release and we already have international tournaments and the first official league to be held in South Korea. Overwatch is rising in popularity on Twitch with streams of competitive games attracting tens of thousands of viewers.

Furthermore, within the gaming community, Overwatch is widely regarded as an incredibly fun game to play, but a poor esport to watch. I’ve spent countless hours watching Overwatch and I’m forced to agree. When compared to other esports, Overwatch has a long way to go until it becomes an easy game to watch.

Blizzard obviously has intentions of marketing Overwatch as an esport. All one must do to be assured of this fact is to check Blizzard’s job openings and see they are searching for a global product manager for Overwatch esports. Because they want to market their newest creation as a competitive game, it is in their best interest to make the game easier to watch.

If the spectating experience is created properly, it should make the actions in-game easier to follow, even for a more casual audience. Basic information like health, who is alive, and the scoreboard should be readily available and able to be checked quickly with little interpretation time. This would not only make fans at home able to track the game themselves, but would more importantly aid commentators in delivering great broadcasts.

While many fans have criticisms about the spectating experience Blizzard has provided, I feel obligated out of fairness to speak on the excellent qualities Overwatch has. First and foremost, is the audiovisual quality of Overwatch. Clear bright colors backed up with impeccable sound design gives the game a genuinely unique feel.

The scoreboard being displayed at the top dead center of the screen is a familiar position to many esport fans and is the obvious and correct choice. Sadly, only two points into the list of good qualities is also where we find the end. While not completely unwatchable, Overwatch has many places it’s spectating experience could improve.

Fortunately, many commonly lamented issues are relatively easy tweaks to make, mostly consisting of the positioning of graphics on the screen. Most outcries are primarily concerned with the player icons and readability of each player’s ultimate charge status.

Currently, the 12 players and their hero selections are placed at the top of the screen on either side of the scoreboard. Both League of Legends (LoL) and Counter-Strike: Global Offensive (CS:GO) place the player’s names and champion or weapon choices at the right or left edge of the screen, which leaves room for a more detailed scoreboard. However, Dota 2 leaves the hero icons at the top of the screen, but they do not also include player names or ability indicators in that same space.

If Overwatch were to move the hero pictures to the left and right side of the screens, it would free up space at the top to create a clearer more detailed scoreboard, allowing for each teams map points or timer and distance counters to be displayed in larger, easier to read numbers. In the same stroke, it would generate real estate for larger player names and hero pictures.

With larger hero pictures, Blizzard would have more room to be creative with how they display each player’s ultimate charge status. I’m personally a fan of the large bright blue check mark indicating an ultimate ability is ready. It’s easy to quickly check and is unlikely to be misinterpreted. However, the current system of displaying a number to show how charged an ability is seems like it could be improved.

The numbers require more time to read than a visual representation does. Looking to LoL, we can see Riot indicates ultimate and summoner spell cooldowns with a greyed out version of the ability icon that ticks clockwise as it expires. I would love to see a similar system in Overwatch, as it provides a quick visual check on how soon a player will have access to that ability and requires less interpretation time, making the game easier to watch.

Another significant complaint fans have is the absence of a mini-map. Blizzard has stated they will not be adding a mini-map into the game client, but is considering adding one to the spectating client (Source). This would be a massive benefit for Overwatch as an esport because it would instantly make the game more viewable.

No longer would viewers be reliant on the spectator to notice flanking maneuvers or spot out changes in the way a team moves about the map. For the professional teams and analysts, it would make map movements infinitely easier to follow and would allow for more detailed study of how each team plays the map. Easily understanding a team’s tendencies creates a more competitive environment, where amateur teams can still learn from the best, even if they don’t get to scrim them.

Now we must confront what is by far the most common complaint about watching Overwatch, the horrific animation overloaded messes that are teamfights. Remember those bright colors I mentioned earlier as a positive for the game? Well when every hero brings dozens of particles from simple bullets to large eye grabbing animations, like Zarya’s Graviton Surge, it can make large fights nigh-impossible to follow in real time.

There is no easy solution to the visual overload that teamfights quickly become. We would never ask Blizzard to remove the particle effects or tone down the colors. They are part of what sets Overwatch apart from so many other FPS games who use much flatter color pallets. So instead, I propose a significantly more radical idea. In order to increase visual clarity and usher in more strategic diversity, I would like to see Overwatch have a hero draft, making it so we only have one of any given hero in a game.

A hero draft would make teamfights significantly easier to follow because it removes all doubt about which team fired an ability. So instead of requiring the viewer to interpret the color or side of the map an ability is coming from, they can instead just associate the casting animation or sound with the team who picked that hero, very similar to LoL or Dota.

Adding a hero draft would make it easier for play-by-play casters to deliver quality commentary on fights because they also no longer have to deal with that interpretation delay. But a hero draft would also affect color casters by massively increasing the topics available to discuss.

We are at a place in Overwatch where nearly every hero is viable, but there are still a few that are simply better than others. As such, we often end up with identical hero selections on maps by teams who may have different playstyles simply because it is the best option.

Restricting the game to only one of each hero will leave us in a meta with increased matchup diversity, granting color casters and analysts more material to discuss. It would require players to practice and play a more diverse array of heroes because they can no longer freely choose what they play each match.

Creating situations where players and casters are put in new scenarios each game helps keep the broadcasts fresh. Every match would feel that much more unique and exciting to both casual and diehard fans by minimizing repetition in competitive gameplay.

Overwatch is gaining in popularity, but it still has incredibly far to go until it reaches the level of the premiere titles like LoL and CS:GO. Some simple overlay updates and the addition of a hero draft would make Overwatch matches easier to follow and more enjoyable to watch repeatedly by simplifying the viewing experience and increasing the strategic diversity. Both of which would also enable commentators to deliver more entertaining broadcasts, encouraging viewers to return and helping the community flourish.

What do you think Blizzard needs to change in Overwatch? Do you agree or disagree with Elbion? Let us know by commenting below or tweeting us @GAMURScom.