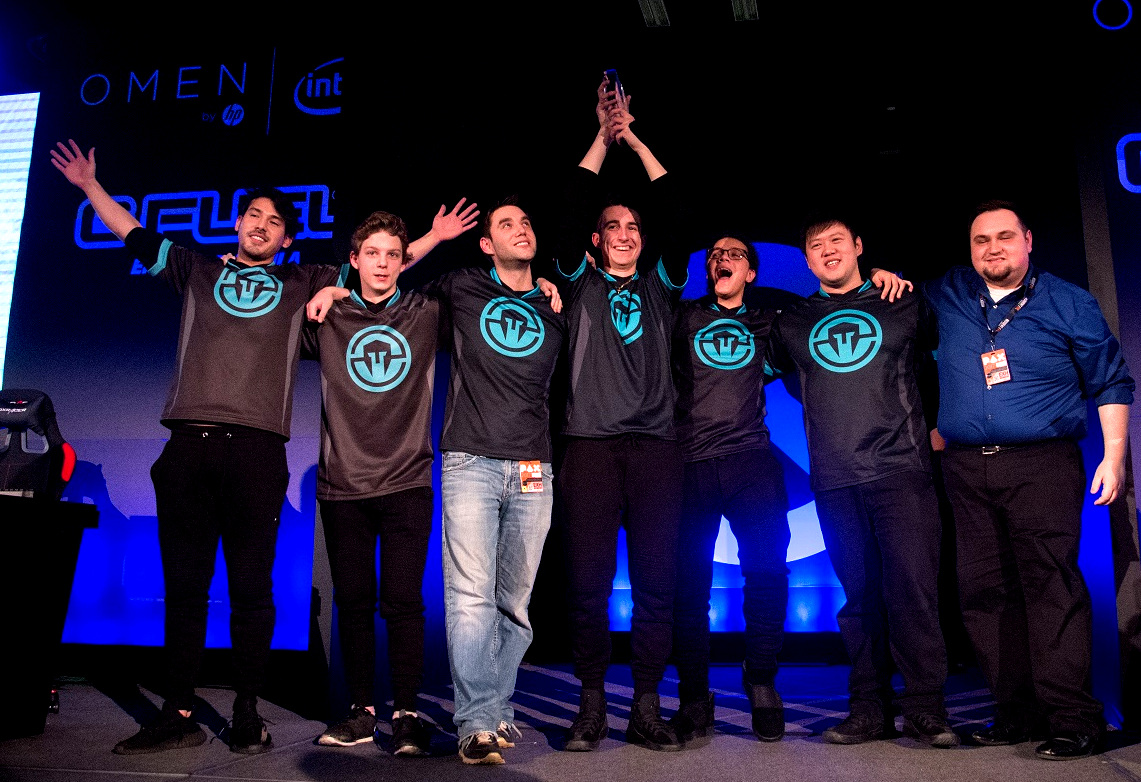 The Immortals are quiet before taking the stage at last year’s ELEAGUE Overwatch Open. It’s one of the first major Overwatch tournaments of the year, offering $100,000 to the top team. Immortals is one of 16 teams to qualify for ELEAGUE’s entrance into Overwatch, and all the big names are here: Misfits, EnVyUs, Fnatic, Rogue.

One of the younger Overwatch teams, Immortals’ players are nervous. Though there’s no audience at ELEAGUE, it’s the first time many of these players have stepped on a stage like this. The makeup, the lights, the cameras—it’s a lot to take in for anyone. But Immortals have a plan: meditation.

They don’t sit cross-legged in an empty room. Instead, the players look for moment of quiet—a clearing of the mind—wherever they have the chance.

“[Meditation] really calms down the nerves,” support player Athen “Aythen” Zhu told Dot Esports. “I found benefit, but it’s really hard to do.” He continued: “We’re trying to get back into it, as our coach believes that it’s one of the best things to do before a game.”

Most of their tournament appearances had been at smaller online events. But even there, nerves are an issue. The pressure of being and staying the best always looms somewhere in the background. Being a part of Immortals, an organization that holds significant prestige in North America, only adds to that—even if Aythen and tank player David “nomy” Ramirez are able to fade into the background as fans are beguiled by Immortals star DPS players, Christopher “GrimReality” Schaefer and Brady “Agilities” Girardi.

“The DPSes get all the love,” nomy laughed. “We’re just buffing the views.”

Immortals’ Overwatch coach Zac “Chance” Palmer believes that player mindset has an enormous role in team growth and performance, regardless of role. That’s why Immortals will dedicate a large chunk of time to getting and keeping its players in the right headspace. “Mindfulness training allows them to first understand where they are and then make those personal adjustments themselves,” Palmer said.

And the benefit of meditation is not just anecdotal. A 2010 study from Psychology Science found that meditation improves concentration and focus, though participants had to dedicate multiple hours per day to the practice. Still, other studies have shown that less intense meditation practice is helpful, too.

Meditation practice, as a whole, is part of Immortals’ philosophy toward player health. “They’re all about fitness and stuff, and healthy minds,” nomy told Dot Esports. Despite playing for 10 to 14 hours per day, the team finds time to stretch and workout first thing in the morning. “Then we just start scrimming until we’re done,” he added. “Normally we have between six to eight hours of scrims, and then we just jump on solo queue and try to grind competitive after that.”

Then they go to bed, wake up, and repeat—at least, when they’re bootcamping together. Immortals have yet to move into a team house. But they will soon, sometime around June or July, Aythen said. “It’ll be near this gigantic office where we’re all going to play in for every game—like, League of Legends, Super Smash Bros., and Counter-Strike: Global Offensive,” he added. For now, they’re staying in the League house while the League team is on a break from the LCS.

Similar to Hammers Esports, an esports organization that’s bringing player health to the forefront, Immortals is looking to separate work and life—something a bit uncommon in esports. Teams traditionally live and work in one space. Computers are set up in one room, and the rest of life goes on in the remaining parts of the house. You know, like a support staff cooking your meals—which may seem like excess to outsiders, but is actually incredibly important when a team is grinding all day.

“When they cook for you, you’re in a game and scrimming for like six to eight hours,” Aythen said. “And in between a map or something, they’ll bring a fruit bowl and that will boost your energy and you’ll get back up there at your peak. It just helps. I don’t know.”

That’s how Immortals’ Overwatch players are operating now, during the bootcamp, but that structure is changing as more and more organizations move toward something that looks like a more traditional schedule. The reason? Player burnout.

In October 2016, Dallas Mavericks owner Mark Cuban told Fusion he won’t invest in an esports team because of burnout. “I’m worried about how quickly players burn out,” Cuban said. “It’s a grind to keep up and to become great. Particularly at [League]. I know teams are trying to do more, but the number of hours involved is a real concern for me.”

Burnout doesn’t happen all at once, according to psychologists. It creeps up on you. It’s emotional and physical exhaustion. It’s detaching yourself from your work. When it happens, it crashes down on you like rain.

Competitive Overwatch players may be playing a game for a living, but that doesn’t protect them from burnout. Players have to protect themselves, and need to work with their organization to come up with a sustainable plan.

“For me, on a break day, I try and not touch the game,” Aythen told Dot Esports. “But sometimes I’ll play at night, when I’m bored. I like to try and stay away, because I feel like burnout is going to be a problem, and in the future, I don’t want to really burn out from playing this game.”

But is that enough to prevent the long-term symptoms of burnout?

For Mexican tank player nomy, it is. No matter how long it takes for him to be the best, nomy will be online playing Overwatch. “We have to understand that this is our passion, and just playing a lot doesn’t need to affect me personally. I just want to be the best, and I just grind it out.”

In the short term, Immortals’ Overwatch players are running on passion, with the organization’s support staff on hand to create the structure they need. Both Aythen and nomy can’t image doing anything other than play Overwatch for a living, at least for now.

“For me, personally, [I’m motivated by] how my life might change because of this,” nomy said. “Just, the support that I can give my family and everything, it just doesn’t compare with anything else.”

Aythen echoed that sentiment. “Going pro was the only thing in my life that I actually wanted,” he said. “I felt like I couldn’t really learn much from college because I didn’t want to pursue any careers there.” When Overwatch was announced, he knew it was his time. “Every day I just remind myself. There’s nothing else I’d rather do than play video games, I guess. I just want to ride this out for as for as long as I can before I’m forced, maybe, to go back to college.”

As for what Aythen thinks could force him back to a regular life outside the Overwatch spotlight, we’re pointed back to one thing: Burnout. Esports has the reputation of working its players hard, running them into the ground before they’re 20. But a pivot toward player health can change that. A system that forces players to retire young isn’t sustainable. Immortals, and other organizations like it, are pushing toward a more balanced structure.

Immortals are a different team since the Overwatch Open. During the September tournament, the team took 15th place in what was, by far, their worst tournament showing to date. It might look to an outsider like the meditation before those matches didn’t work. But that’s not the point, nor how meditation works. It’s not like going to the gym: This isn’t targeting your arms by bench pressing.

Meditation is an all-over practice. “Aside from mentality, I wouldn’t say it’s for specifics so much as a better understanding of oneself,” Palmer said.