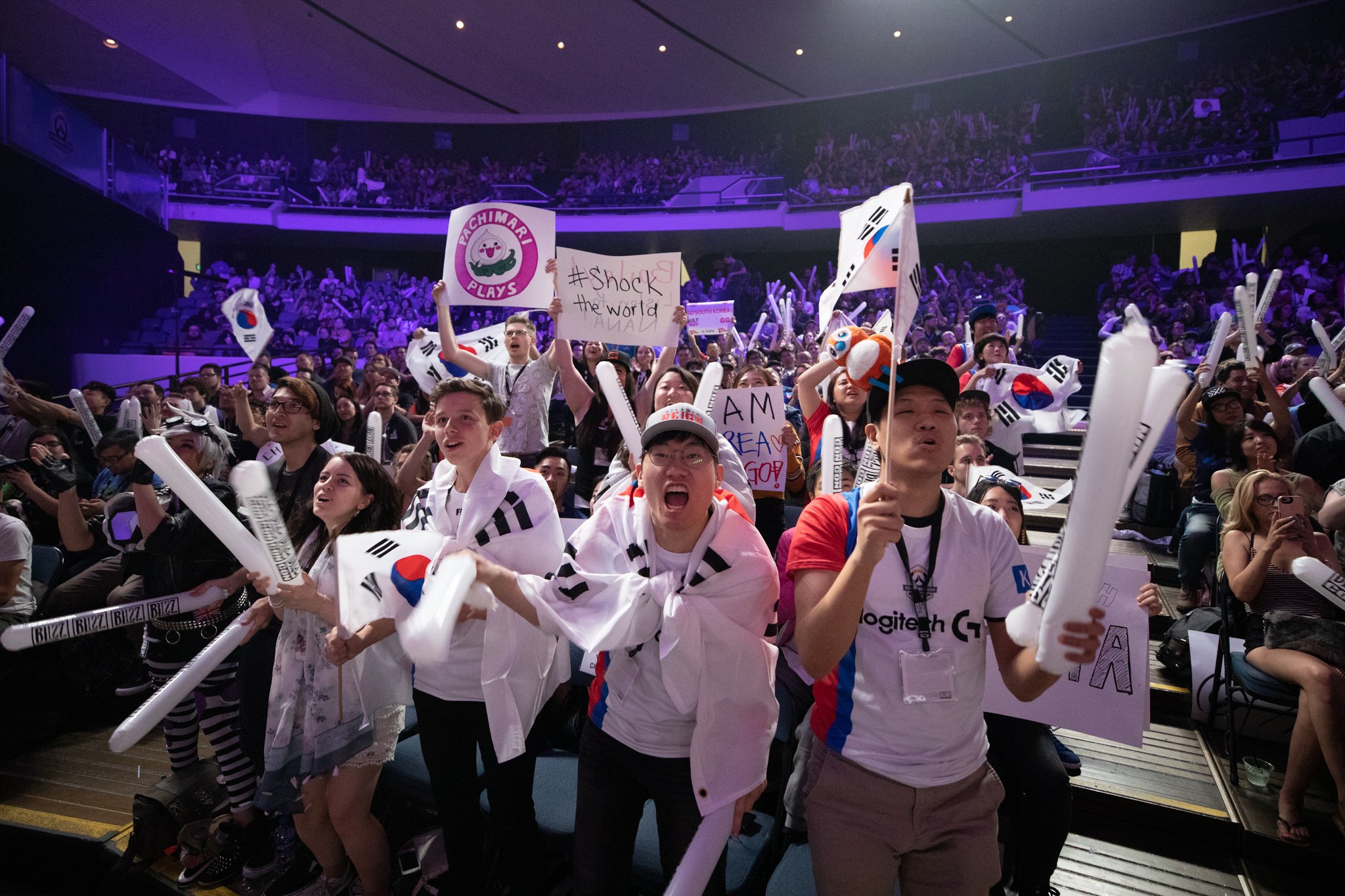 Fans sort themselves into country-based cheering sections at the Overwatch World Cup finals. There’s a section for each country: South Korea, Finland, United States, Canada, China, Australia, France, and the United Kingdom. The U.S. section spills over into unclaimed seating nearby, a swell of red, white, and blue that booms chants—USA! USA!—through the arena. A line of French fans dressed in black-and-white stripes and berets sing France’s national anthem. South Korean fans roar at the sight of their boys.

There are a lot of components to being a fan. The joy of belonging. Emotion, loyalty, and an extension of self. Just like in sports and entertainment, esports is harnessing fan emotion in a way that becomes all-encompassing, a part of a fan’s very being. There are different levels of fandom, Cornel Sandvoss told Dot Esports. A professor of media, journalism, and film at the University of Huddersfield in England, Sandvoss said fandom’s defined by regular and emotional engagement with something. Talking about a team becomes less of a “they” thing and more a “we.”

“It tends to be something that’s quite embedded in the fabric of everyday life,” Sandvoss said.

American fans at the Overwatch World Cup finals dissipate slowly, lowering their flags and spreading out to other sections after the U.S. team loses in the first round, a shock to the whole arena. Attention turned to the small U.K. cheering crowd—a few fans of which flew all the way from the U.K. for the event. “After the defeat of America, it got everyone really rallied,” Henry, a fan from the U.K., told me in the arena. “It was nice to come back to a larger section. It got everyone really psyched.”

“The whole idea of national pride that we get to introduce for the Overwatch World Cup is truly special and unique,” Overwatch League director of marketing Kristin Connelly told Dot Esports. “That’s something I’m going to be looking to dive more into for Overwatch League next year. I’m looking to celebrate that because it’s so awesome to be able to look at a league or a competition and see somebody from your home country, or maybe even your hometown.”

The view here, of the color-coded crowds draped in their countries’ hues, is a study in fandom. Country affiliations are an easy box to tick in the realm of cheering section decisions. But fans in these sections are also showing loyalty to their Overwatch League teams: Houston Outlaws fans piled into the U.S. cheering stands to support Shane “Rawkus” Flaherty and Austin “Muma” Wilmot. When the U.S. was eliminated, the fans took to Finland for Jiri “LiNkzr” Masalin or to Canada for Chris “Bani” Benell.

With 20 teams attached to cities across the globe (though the majority of them are based in North America), there are at least 200 players in the Overwatch League, Connelly said, from nearly 20 different countries. It’s not a comprehensive geographical player base—there isn’t a single signed player from Africa—but it’s a round-up of diversity the league is proud of.

“A lot of what we’ll be doing for the 2019 season is going more behind-the-scenes with the players about their backstories, giving that feel of who the players are,” Connelly said.

It gives the Overwatch League fan-base a bit more to grab onto, given that many of the teams’ regional ties are superficial at this point. (The league doesn’t expect to start its city-based structure until 2020, at the earliest.) Teams have made an effort to engage with local fan-bases in the off-season, like the San Francisco Shock and Los Angeles Valiant’s California Cup, but the league is still centered around Los Angeles. The city-based showcase event is a way to test the Overwatch League’s home-and-away system, and so far, it’s worked. The nature of teams’ city-based ties, despite the connection being largely symbolic, is something that can create the kind of electric atmosphere experienced at the Overwatch World Cup. It could bring sports history to a one-year old league—and fans to the table for teams.

A cultural connection tied to a city’s history is just a starting point for fandom in traditional sports. With something to latch on to, fans begin to see themselves in a team or a player. It’s where the emotional attachment comes from.

“When you talk to people about their fan object or favorite team, they really quite quickly start talking about themselves,” Sandvoss said. “Not deliberately, but they talk about certain attributes, certain values, and in a way they are things that matter to themselves. There’s a self-reflective relationship between the fans and the sports team.”

For a team like Dallas Fuel, whose owner Team Envy is Dallas-based, the city-based connection is an advantage; “There’s an entire team of 20-plus people back in our headquarters in Dallas that are working on the logistics of what city-based competition will look like, which is why it’s great that Fuel is part of a larger esports group like Envy Gaming,” Dallas general manager Mat Taylor told Dot Esports. Using the city’s history and the organization’s roots there, Dallas has something to build off of.

“That’s where the emotional attachment derives from than something that’s there in-and-ofitself in the beginning,” Sandvoss said. And it’s especially true for the Overwatch League, where the first season has only just registered as “history.”

The Overwatch League is both digital and physical, its legacy only a few years old. Some are fans of the game itself, choosing players to build a fanbase around based on in-game factors. Others have a more geographical connection, tied to the team’s name (and eventually, the city). They’re able to connect as fans to the Overwatch League in physical and digital spaces, in the Blizzard Arena Los Angeles—and later, city-based venues—or online, through Twitch or your TV screen. Fans are able to build out their fandom both physically and digitally, proudly donning jerseys at in-person events or digitally through the Overwatch League skins system in-game.

Whereas sports stars are idols, esports players are often seen as more—an idol, sure, but a friend, too. And that’s both good and bad. “There’s an element of expectation in all forms of fandom because the emotional and quality of the fan object derives from a self-reflective expectation we have of it,” Sandvoss said.

Overwatch League players are micro-celebrities in their own right, many of whom have dedicated groups of fans interested in watching them play and work online. With the Overwatch League’s offline format, many fans are also interested in watching teams play live. Fans want to feel close to their idols, and the internet makes that easy—Instagram, Twitter, and Twitch blur intimacy lines, allowing fans to feel more connected than ever to celebrities, even if there is no actual interaction. It’s not something sports athletes have had to contend with as much; there’s a distinct distance between the player and a fan. You could never expect to jump into a pick-up game with, say, the Golden State Warriors’ Stephen Curry—or even watch from the sidelines as he practices. But if you’re good enough, you can meet New York Excelsior’s Bang “JJoNak” Sung-hyeon on Overwatch’s ladder, or chat with him in his Twitch chat while he streams.

A franchised, city-based structure is a new frontier for building out followings, harnessing a city’s sports history for esports. Being a fan of an esports team means there’s an emotional commitment and a dedication that perseveres throughout the ups-and-downs of a season. For Shanghai Dragons fans, it was through the downs—and even more downs—of the Overwatch League season, a real test of devotion. In season two, teams and the league itself will continue to capitalize on that dedication as a way to keep viewers engaged. Casual viewers are good, but it’s the fans that drive the Overwatch scene’s culture.