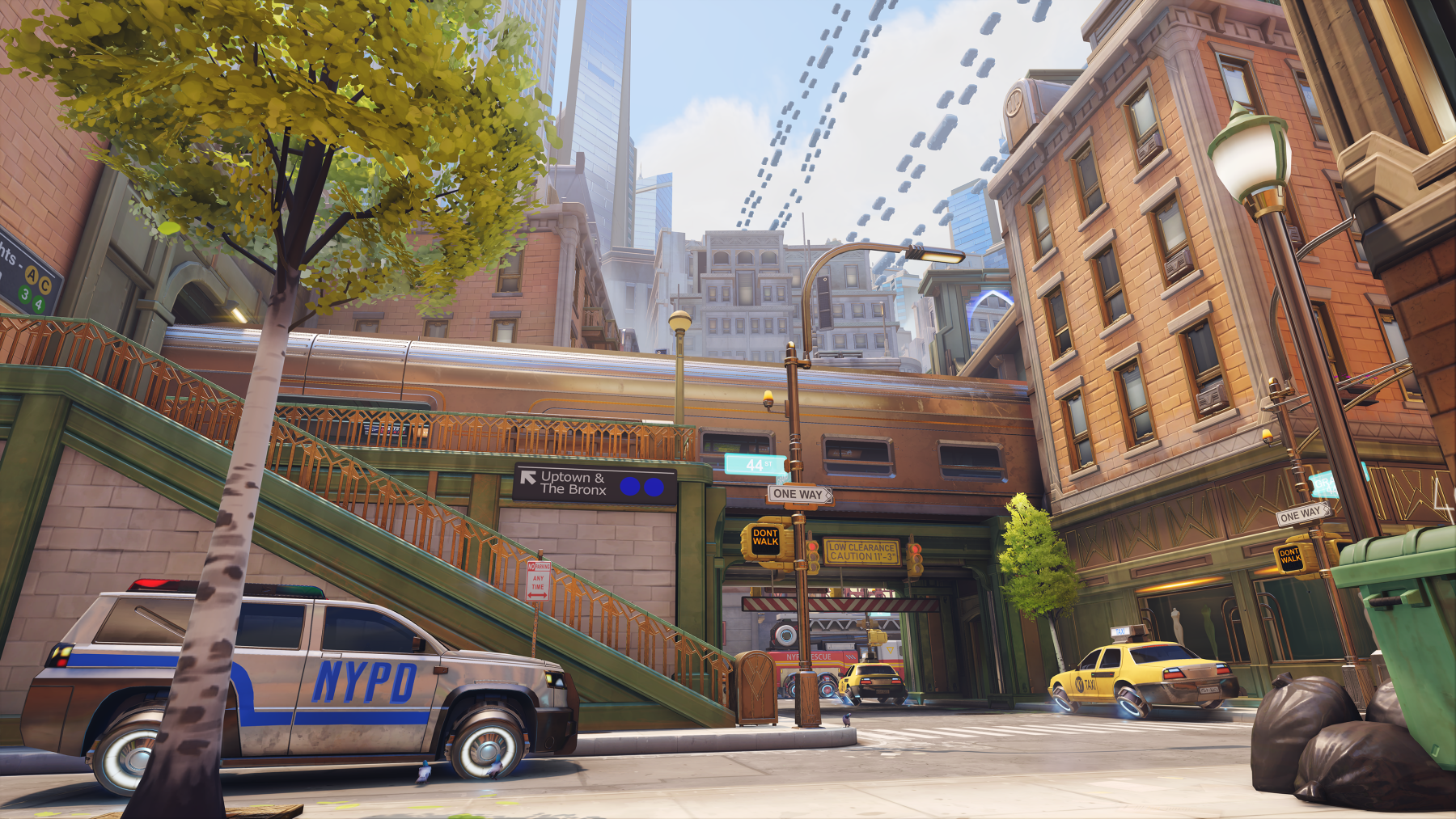 Not content to let European cities like London and Paris have all the fun, developers on Overwatch 2 brought one of North America’s most iconic cities to life in the sequel.

Midtown, formerly known as New York City during development, is a smaller version of Manhattan that faithfully adapts the city’s beauty and chaos. One of the game’s most detailed maps, Midtown is full of nods towards the Big Apple and the spirit of big cities around the country.

The game’s newest Hybrid map feels massive in comparison to classics like Eichenwalde, but the real change is in how much vertical space players will have to maneuver and keep a close watch on. Here’s everything you need to know to tackle Midtown’s madness.

Attackers begin their pursuit in a slightly futuristic bar that still maintains the “dive” vibe that New York is known for. Players will rush through a street full of shops and signs with genuinely hilarious developer notes—please check out the movie listings—and work their way to Point A, which is the outside of a fire depot.

Before they can start racking up ticks, though, both sides will have to face the true enemy of Midtown: the train. This upper-level area, about the size of a hallway, is a key point for both defenders and attackers to cause some chaos. It’s a great vantage point for both sides to rain down damage from above.

If players clear the train stop, they’ll find their way to Point A, which is a King’s Row-esque capture point with a sniper’s window on the top left for defenders. Multiple plazas and inlets exist around Point A for heroes to sneak in for surprise attacks or take a breather from the action.

After capturing the payload, attackers will escort the world’s tiniest fire truck through the streets of Midtown. Defenders have a great chance to salvage a poor showing by keeping attackers from entering either side of the map’s next obstacle, the underside of a large green bridge.

Like many Hybrid and Escort maps in Overwatch, Midtown then enters a “streets” phase. Both attackers and defenders can take advantage of bridges, staircases, and elevated levels, like random stacks of concrete that feel wildly accurate to a busy city stage, to snipe or rain damage down on enemies. Attackers will have to pass the payload through a massive archway on their way to the map’s second point, giving defenders another great chance to stop a steamroll.

Attackers will then escort the truck up a short hill and take a sharp right into the highlight of Midtown, Overwatch 2’s rendition of Grand Central station. Checkpoint A is the entrance to the storied structure, complete with bronze details and traditional architecture.

Grand Central Station houses the remainder of the map, which is a cool experience no matter how you feel about New York City. High ceilings and gray brick mark each part of the pathway, from the expansive “lobby” area to the winding hallways in the final pushes of the map. Midtown’s last point takes players to a platform, Entry 7, that has a waiting train ready to whisk someone off to a new destination.

For Midtown’s initial capture point, much of the focus might unintentionally rest on the absolute disaster that is the train area. On both sides, close-combat or explosive heroes like Junkrat, Brigitte, and talented Doomfists will do serious damage in that narrow car. Don’t head into the train if you’re not confident you can win a one-vs-one or a three-vs-three with your team. Otherwise, the initial capture point seems to be attacker-favored.

The defense’s time comes immediately after, though, with tons of chances to stop a fast attack. Defenders should run at least one long-range hero in the streets phase to take advantage of the high ground. Sojourn or a newly revamped Bastion could wallop if placed in a favorable position, as could an Ana with well-timed anti-healing grenades.

Grand Central Station feels like it could be absolute chaos for everyone involved. While it lacks the countless vertical levels the rest of the map offers, it makes up for it with corridors and hideouts that greatly reward (smart) flanks. Tracers, Reapers, and Cassidy players could take advantage of these hideouts, but nearly every hero could get something done at the wild end of the map.