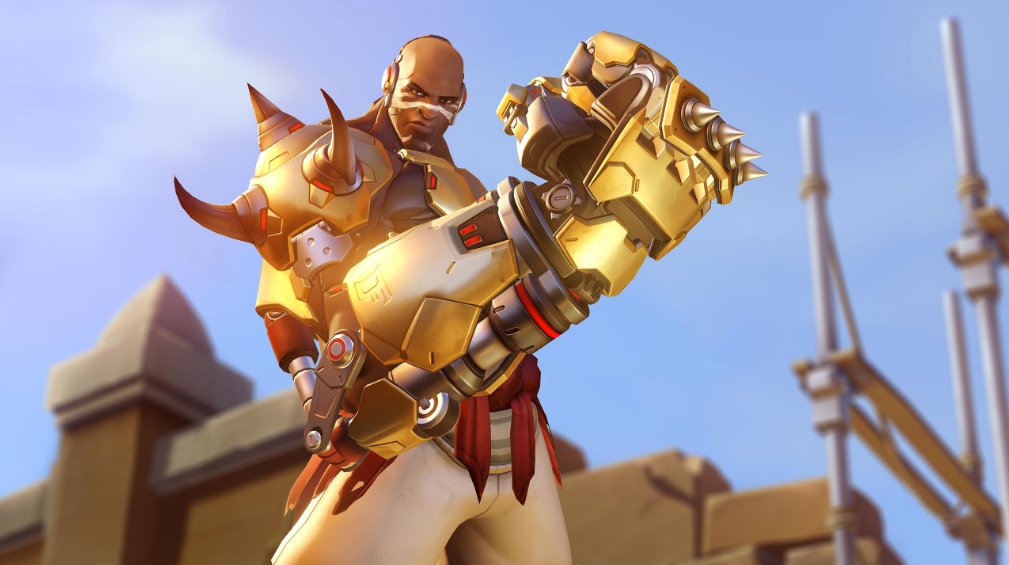 Akande Ogundimu was born into a rich Nigerian family, an heir to a company that specialized in prosthetic technology.

After losing his right arm in the Omnic Crisis and applying cybernetic prosthetics to his body, Ogundimu fell into a dark world as a member of mercenary organization Talon, eventually taking on the mantle Doomfist.

Doomfist would eventually lose a battle to Overwatch hero Winston and become imprisoned. Now, he’s been broken out by Reaper and the rest of Talon to retake his place as one of its leaders and continue wreaking havoc on the world. Nothing will ever be the same.

Here’s how to master the gauntlet and wreak your own havoc as Overwatch’s 25th hero, Doomfist.

“Every battle makes us stronger”

Doomfist is a damage hero and he can be quite a difficult one to master.

He’s extremely ability-dependent, much like Orisa who was released before him. His bread and butter is using his abilities to create combos the way that a character might in a fighting game—and they can be incredibly lethal when executed correctly.

First, Doomfist’s default primary fire is his Hand Cannon—literally, a cannon in his left hand—which fires four shotgun-like projectiles from each knuckle in his fist. Each shot fires six pellets and each pellet does up to six points of damage, but its attack range is short.

Since the magazine of the ammo in his hand cannon is limited to just the four shots, it’s important to manage each one and get used to the cadence of their fire rate and the following 0.65 second automatic reload animation that comes after the magazine is empty.

Hand Cannon can do a lot of damage up close, but the range falloff is steep. It can be used to do chip damage from a distance, but he’s not a sniper by any means. Its main function is strong burst damage at short range. Thankfully, he’s able to close the distance quickly with his gauntlet.

“Does anyone else want to try me?”

At a base level, each of Doomfist’s abilities are strong. But when they’re combined, he becomes a master of disruption and damage-dealing.

Bound to alternate fire by default, Rocket Punch is his most powerful and most useful ability since it can be used in a variety of ways. When held down and charged, Doomfist will launch himself an extreme distance, dealing damage to those he hits and knocking them back.

Get to know Rocket Punch. If it lands a hit on a target and knocks them back into a wall, it deals massive damage, one-shotting the majority of the cast. It has a short cooldown of just four seconds and can be used as both a main tool of offense and a great way of escaping when things aren’t going your way in a fight.

Rising Uppercut is a Shoryuken-like jump punch that launches nearby enemies into the air with Doomfist, allowing him to follow up with a variety of attacks to do damage. The target will be vulnerable in the air for a short period if he connects with the attack, which has a cooldown of seven seconds and deals 50 damage.

Seismic Slam can be used as both a combo starter or a finisher. Doomfist leaps forward and smashes the ground, knocking nearby enemies closer to him. When used from the air, a blue cone-shape will appear on the ground below, showing the attack’s hitbox.

Getting to know these three abilities is key since using them like a combo in a fighting game will lead to much success when it comes to dealing damage as Doomfist.

Experiment with combos. Go into the practice range and see which ones work best in which situations.

For example, Doomfist can use Seismic Slam to knock an enemy closer to him, then follow up with Rising Uppercut to launch them into the air, and finish them off with a well-timed Rocket Punch or up-close shot from his Hand Cannon.

Landing these attacks is important since his passive ability, “The Best Defense…,” rewards Doomfist with shields as he does damage with an ability. He earns 30 shields per enemy hit with any of his base abilities (not including Hand Cannon) and 75 shields per enemy hit with his ultimate for a maximum of 150 shields total, maxing out his health pool at 400. That’s tank-like health.

Thanks to these abilities, Doomfist is also one of the most mobile heroes in the game, despite his size. Using a fully charged Rocket Punch is a great way to quickly reach an objective and combining it with Rising Uppercut and finishing with Seismic Slam will allow him to travel great distances in a short period of time.

“It’ll take more than that to stop me”

Meteor Strike is one of the coolest and deadliest ultimate abilities in the game.

When triggered, Doomfist launches himself high into the air—and out of sight. The player can then zoom out to get a better view of the map and the large blue circle that denotes his target area on the ground below.

When triggered again, Doomfist crashes down to the ground after a short delay, dealing 300 damage at the center of the circle and up to 200 damage on the edges.

This ultimate has a lot of potential for a variety of uses. It’s great for clearing out enemies who are packed tightly together. It can be somewhat easy to dodge, though, since there’s time to move out of the way as Doomfist reaches the ground. But the attack is deadly when it lands.

Meteor Strike is great for zoning as well. Enemies will be forced to vacate the area unless they want to be pummeled by Doomfist’s gauntlet. It’s a highly telegraphed move, however, since enemies have a decent amount of time to clear out of an area while he’s in the air.

Doomfist’s ultimate is strong on Assault and Control maps since the attack covers a large portion of the objective areas. Most importantly, it can land inside of buildings, regardless of whether there’s a roof.

Combining Meteor Strike with Zarya’s Graviton Surge, for example, is a quick way to destroy a team’s hopes and dreams.

Using his abilities well, Doomfist can dive in and quickly dispatch of any squishy backline hero like Mercy or Zenyatta. Whether it’s a combination including his Hand Cannon or one well-timed Rocket Punch with a wall splat, healers have another hero to be worried about jumping on top of them.

Basically, any hero that lacks mobility will have a hard time against a good Doomfist since he’ll be able to dive on them or line them up for a Rocket Punch pretty easily. Heroes like Ana, Symmetra, and Torbjorn will have issues with him.

If Sombra hacks Doomfist, he’s going to have a bad time. Since he’s so ability-dependent, having the strongest parts of his kit taken away will make things tough for him.

Orisa almost seems like she was built as a Doomfist counter. Her shield is mobile, her “Halt!” ability can be used to pull him away from close range, and her Fortify ability will prevent him from dealing lots of damage or knocking her back with his Rocket Punch.

Tracer, Genji, and Pharah will have some fun with Doomfist since they’re all able to keep a decent distance from him while quickly dodging his attacks with their maneuverability. Tracer and Genji, especially, are able to move quickly while simultaneously charging their ultimates and dealing quick damage to him, thanks to his large hitbox, which doesn’t match his health pool of 250.

This list is long, but anyone who’s able to keep their distance from Doomfist and still do damage will be able to handle him pretty well. Sure, he can close the distance easily, but well-aimed shots from Widowmaker, Soldier: 76, Bastion, or Hanzo can quickly dispatch him.

Hog will decimate Doomfist, considering his combo isn’t nearly enough to deal the necessary damage to take the pig down. Plus, Roadhog’s hook will easily pluck Doomfist from out of the air.

It was almost three years between the first mention of Doomfist in Overwatch’s reveal trailer at BlizzCon 2014 to his release in the summer of 2017, but the game’s world finally has its first true supervillain.

He’s here to stay—and rightfully so. He can be a devastating menace in the right hands and circumstances.