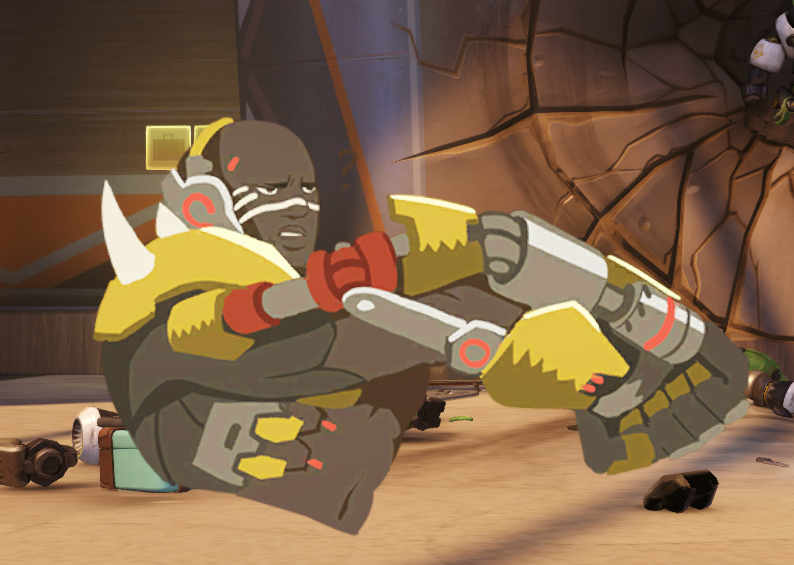 The stories told by Doomfist’s new sprays—now live on Overwatch’s public test region—may not be lore-accurate, but they’re still great.

He’s got jokes, boxing homages, and a little peek into his early life. Often times, sprays get passed over pretty quickly: Everyone goes straight for the skins. But Doomfist’s are worth an extra look. One of Doomfist’s sprays even fits together with an existing Overwatch spray, like a few others in the game.

Related: These Overwatch sprays are designed to fit together

Another one of Doomfist’s new sprays is a reference to everyone’s favorite Overwatch meme: Punch Kid. His spray in-game is beloved—and he’s also in the Overwatch cinematic where Doomfist is first mentioned. Punch Kid is great, but Doomfist Punch Kid is even better.

Look! They’ve even got the same stupid expression. (We hope Doomfist didn’t hear that.)

Doomfist’s sprays have another reference to the Overwatch cinematic. You know, where the kids speculate about Doomfist being able to level a skyscraper. Naturally, Doomfist’s got a level spray for that.

There’s also a reference to Doomfist’s fighting game–like playstyle, and a nod to an iconic Muhammad Ali photo.

We get a look at Doomfist when he was just a young fighter named Akande Ogundimu: It’s an image of Overwatch’s latest hero before he lost his arm in the Omnic Crisis. From what we know about the hero, however, it’s clear he was still a great fighter.

Keep an eye out on Doomfist’s sprays as they hit the live game. If we do get a new event, it’s likely the Overwatch hero will receive additional telling sprays.