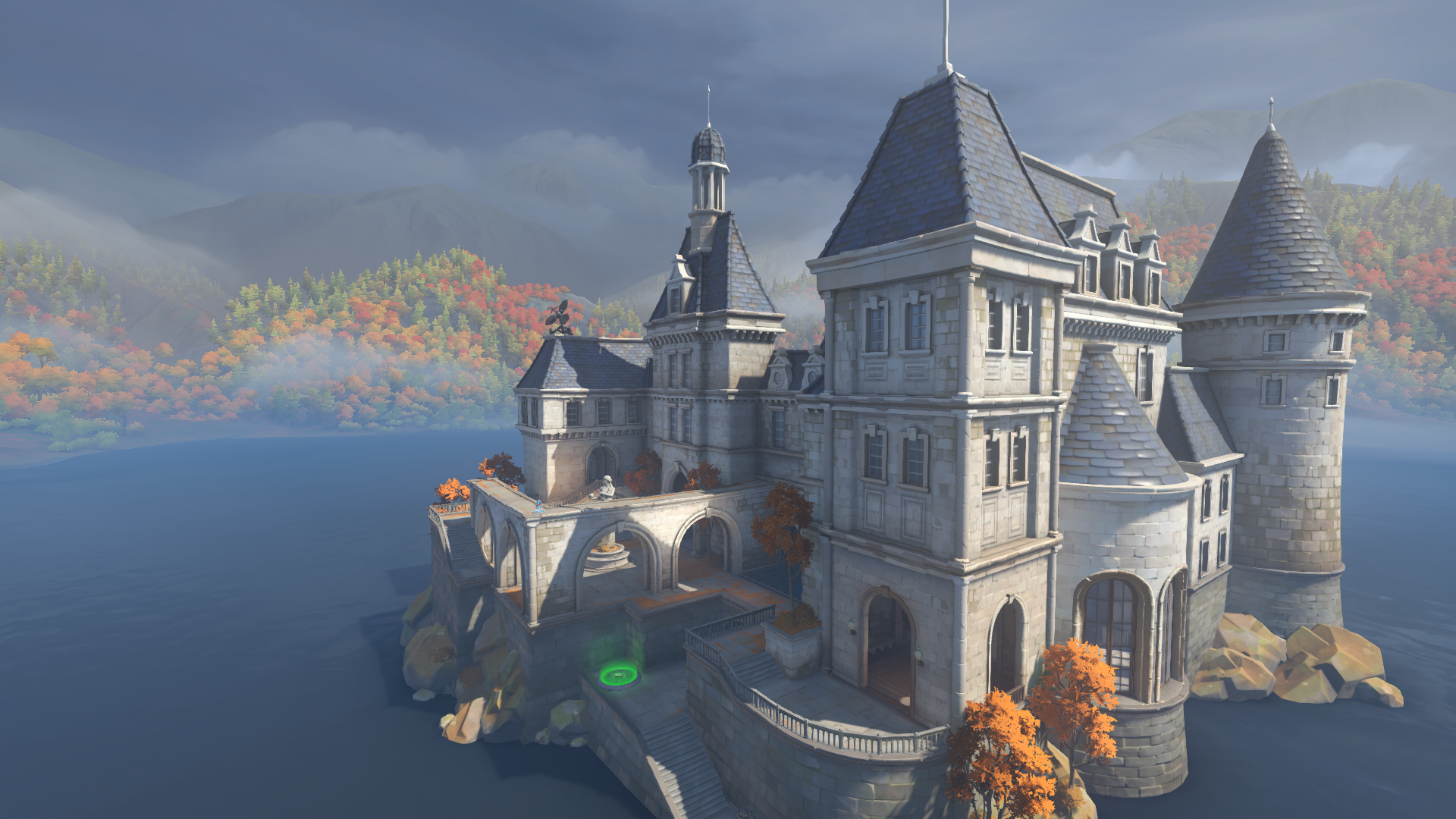 Blizzard calls Château Guillard Widowmaker’s “ancestral home,” though it’s unclear if she’s lived there before. It belonged to the Guillard family—an influential French family presumably related, somehow, to Lacroix—before the family’s power declined decades after “the Revolution.” It’s surrounded on all sides by water. Once abandoned on the lake, the sprawling château has a new owner: Widowmaker.

Much of the home is barren—it’s clear no one has lived in the place for quite some time. Paintings hang off balance on the wall, with furniture draped by plain fabric. Widowmaker’s touch has yet to spread across the dusty rooms, save for a few pieces here and there.

The office, with stained red walls and towering bookcases, is home to Widowmaker’s most-prized possessions.

Among the equipment crates and stacks of boxes sits one of Widowmaker’s most important possessions: Her sniper rifle. Propped up against her desk, where her laptop sits, it’s always within reach. Just out of view from the desk is a photo of Lacroix and her Overwatch agent husband Gerard—the one she murdered after being brainwashed and reprogrammed by Talon.

Related: Overwatch and The Matrix: A tale of transmedia storytelling

Some Overwatch fans believe Château Guillard and the wedding photograph are hints that Widowmaker’s programming may be wearing off. Parts of Lacroix are still there—that’s certain in that she keeps a photo of her late husband around. The return to her ancestral home, likewise, could be a peek of Lacroix shining through.

The office itself is dark—filled with a thick coat of smoke. Lacroix may be in there somewhere, but she’s cloaked by the oppression of Widowmaker.

Panning left back to the desk brings the laptop back into view, with a plane ticket tossed to the side. Though the plane ticket is addressed to Danielle Guillard, it’s safe to assume it’s Widowmaker’s alias. An email pulled up on the laptop is addressed similarly, albeit in French.

“Hello, Ms. Guillard.” the email reads. “We are confirming a limousine will meet you at the Nice Cote d’Azur airport at 20 h 30. The trip from Nice to Monaco will take approximately 30 minutes. You can, of course, change the reservation at your convenience. We remain at your disposal for any other request.”

Widowmaker was last in Monaco to meet with Doomfist, as explored in the Masquerade comic.

Little details of Widowmaker’s life are spread across Château Guillard in similar ways, though the office tells the most detailed story. Hints of her life are dotted among the mansion: A single plate at a sprawling table, two glasses of wine in a cellar nook. As Overwatch’s story moves forward, seeping lore across in-game references, comics, and short videos, we’ll likely see more of Widowmaker—and maybe even Lacroix.