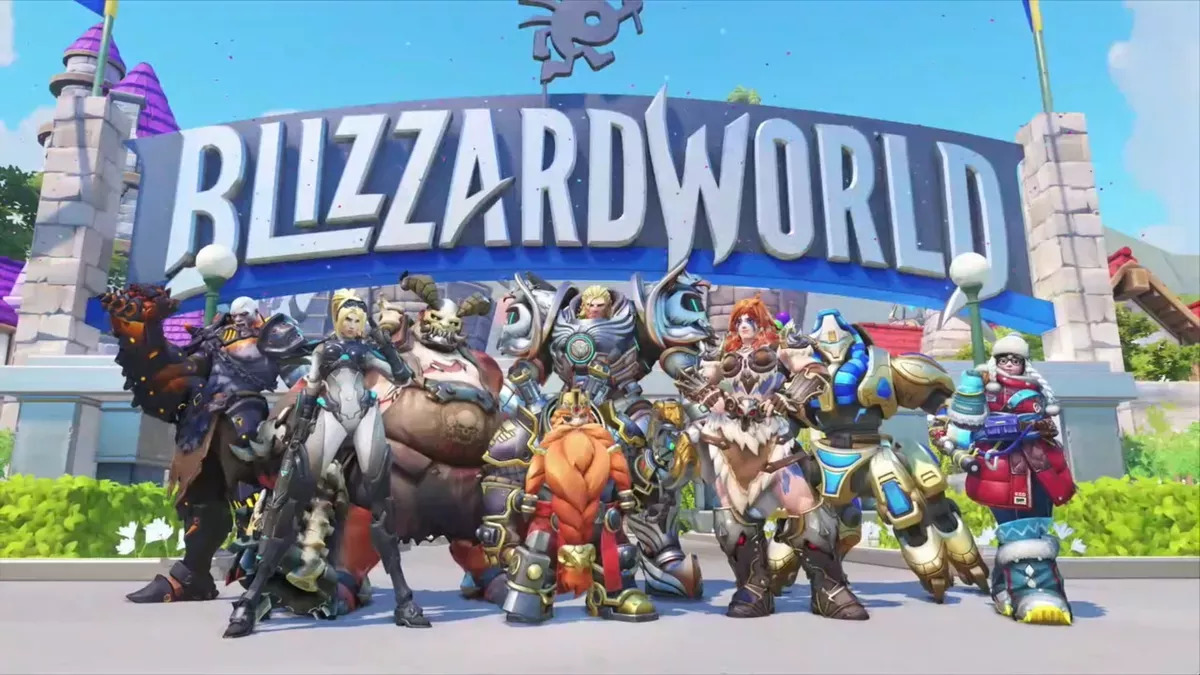 Nostalgia touches every inch of Overwatch’s newest map, Blizzard World. Each of Blizzard’s titles, save Overwatch, have their own individual areas of the park. Diablo has the Caldeum Market and the Den of Evil, Heroes of the Storm is represented with a themed arcade, StarCraft sees a Nydus Worm Slide, Hearthstone’s got its own tavern, and World of Warcraft sprawls from an auction house to the Fargodeep Mine.

A voice booms over the Blizzard World trailer: “Where you took your first steps in Azeroth. Where you confronted the lord of terror himself. Where you spawned your first zergling rush. Sometimes epic memories can only be made in an epic world. Your adventure. Your community. Your memories. See them come alive in your world.”

Announced at Blizzard’s annual celebratory convention, BlizzCon, in November, Blizzard World isn’t slated to release until early next year, but it is playable right now on Overwatch’s test server. The crossover map will likely launch with a series of Overwatch skins inspired by Blizzard’s other titles: Nova Widowmaker, Immortal Orisa, Barbarian Zarya, and Blackhand Doomfist are among the offerings coming early next year. The eight new Blizzard-themed skins are less of a nod towards the developer’s titles and more like a finger-point straight at Blizzard’s other characters.

If for any amount of time your excitement for Overwatch has halted, it’s these offerings that will pull you back in. For lore nerds, it’s a chance to search for Easter eggs and references strung from Blizzard World’s attractions. And for the gameplay focuses, it’s a series of new streets to figure out.

The entrance to Blizzard World leads straight into the Hearthstone Tavern, which also operates as the player spawn room. Hearthstone music plays in the background, until you step outside the walls and into the World of Warcraft Stormwind entrance. And this music isn’t just ethereal; it’s actually coming from speakers set into Blizzard World’s landscape, much like you’d find at Disney World or other theme parks.

It’s the immersiveness of these theme parks, both Disney World and Blizzard World, that poke at our need for nostalgia. It’s created to be exactly what we’re looking for from the place itself; the happiest place on earth (or the internet) isn’t a coincidence. It’s perfectly crafted to be exactly what it is.

Disney World is, as business magazine Fast Company put it, “effortlessly magical,” despite the questionable labor and capitalist desire that fuels the whole charade. Everything is perfect—each detail is intentional, down to what you smell as you stroll down Main Street U.S.A. Disney is able to capture our sense of smell by using a device called the Smellitzer, created by Disney’s team of problem-solving creatives, called Imagineers, to influence experience. It’s nostalgia, experience, and even marketing.

Of course, we can’t smell Blizzard World’s sizzling death wings (a nod to Deathwing, the Destroyer) as we push the payload toward the Snaxxramas food stand (again, a reference to World of Warcraft). Blizzard can’t hijack our sense of smell as if Blizzard World were a theme park, but it’s unquestionable that it would if it could. It’s the ultimate immersion, and it’s that immersion that game designers often strive for.

Blizzard ramps up the sense of nostalgia and magic to really draw us into the fantasy of the map, whether it’s a StarCraft spawning pool water park or Diablo-themed rollercoaster. There are nods to Blizzard’s biggest fans—the fans who know—strewn across the park. “There is no cow level,” a few signs read. For the uninitiated (and that included me, before I started researching it), the secret cow level is a hidden area in Diablo 2, and as you may have guessed, it’s filled with cows.

In World of Warcraft’s Flight of the Duskwood ride, there’s a room down a corridor labeled only 131. Not only is it an Easter egg referencing Blizzard’s first real-world street address, but it’s also a tip of the hat to Disney’s Club 33, which is a members-only club inside Disneyland, originally labeled only with a 33 on the door.

Magical interactions like this continue throughout Overwatch’s Blizzard World, much like Disney’s hidden mickeys scattered around the company’s parks. Your experience isn’t diminished if you don’t spot them all, but they’re little nods to those in know. You want to find more, so you come back.

Each addition to Overwatch—each map, each new hero, each piece of expanded lore—is part of Blizzard’s mission to keep us playing Overwatch. Every hint at immersion, or nod to past Blizzard titles, in Blizzard World is a ploy to keep us. The developer’s intention certainly isn’t malicious; there’s no doubt that those who’ve created Overwatch’s newest playground love the game they’ve created. But like Disney, Blizzard is a business that needs to continue to make money to survive, and to do that, its players need to be invested in its worlds.

Blizzard World needs to be a place that players want to exist in for some time, especially as Overwatch continues through its second year of existence. Unlike Disney, Blizzard World isn’t something that exists, but it’s something Blizzard wants us to want—and we do.