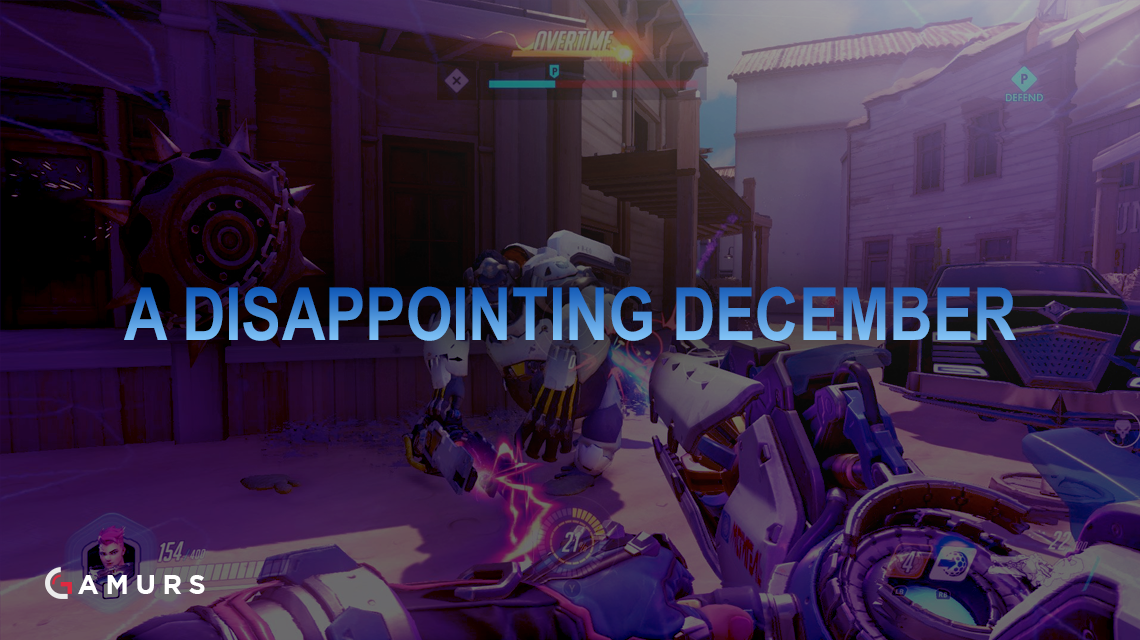 A Month of Letdowns

Yesterday, MSI postponed their Masters Gaming Arena (MGA) Overwatch tournament until further notice, 2017 at the earliest, citing technical issues. This is only the latest disappointing pieces of information Overwatch fans have received about LAN events in the month of December. From tech problems to poorly designed formats, this month is shaping up to disappoint.

I’m going to highlight some of the issues I see with four events that are occurring this month that can affect the quality of the tournament. Some of these issues are easy to solve, some are not. But regardless, I want to spotlight them so hopefully they can be avoided in the future.

This category of issues is the one that is often thought of as simple to fix. Sometimes it can be, like restarting a computer. But the possibility of malignant issues remains, as we saw at MGA. If we are to believe the official statement, the technical issues were out of Gfinity’s control. And according to the overlay the MSI Twitch channel had up, the issues that were out of their control were external internet complications.

The “unprecedented” issues are difficult to hold against anyone if they were truly as unpredictable as we are being led to believe. However, the issue remains that the laptops provided were unable to even run Overwatch properly. From the advertisements run on stream, it’s obvious that a major point of the tournament was to advertise the new gaming laptops, which clearly didn’t work out too well.

We have no proof if MSI believed that their laptops would be sufficiently powerful to run Overwatch, but as we’ve heard, they weren’t. Players voiced complaints about frame rate issues due to only being on 60hz laptops, as well as being unable to have peripherals operate properly because of driver issues. Once the issues were finally waylaid enough to get in a game on day two, we could visibly see players stop moving in game, seemingly lagging or having computers freeze.

It seems apparent that they did not check beforehand if the setups would work properly. If that’s the case, then these issues can be placed squarely on the tournament’s shoulders. These sort of technical issues could have been known if the setups were vetted for problems and caused MGA to be a failure of an event. I seriously hope these issues can be avoided in the future.

Just recently, IEM announced it would be making its entry into Overwatch by holding a tournament in Gyeonggi. Initially, this was met with excitement from the community for a couple of reasons. First, it seems to hint that Overwatch may find a spot in the prestigious IEM rotation in the future. But secondly, it gave us more OGN produced Overwatch, which has so far been fantastic.

However, even this tournament has fallen under some criticism, specifically for the way the brackets have been set up. With six teams being invited, IEM will automatically seed two of them into the semifinals, with the other four teams need to win an additional series to make the finals. Normally, I have no issues with granting teams a bye round, but only if they have earned it.

In the American National Football League (NFL), the top two seeded teams from each conference are granted a bye round. But in the case of the NFL, those teams had to play an entire season and emerge with the best or second best record in order to earn that spot. But when it comes to this IEM event, these teams have no proven track record.

These teams have not all played in the same league to determine a win loss record that we can compare. So whichever teams get seeded into the semifinals gain an advantage in the tournament based off of subjective means. This could all be avoided with a simple round robin where the top-four teams progress. It would be a much more objective process of determining who makes the semifinals because the teams have to prove their worth against each other and on the current patch.

It would require more time to play said round robin format, and because of the short notice for this IEM event, it’s possible they chose this format simply because it cuts the number of games played. But in order for future tournaments to be as objective as possible, I would like to see better designed brackets, or at least bye rounds, being given only based off of proven results.

The (Lack of) Map Selection Process

Easily the most lamented tournament issue in recent weeks is the map pool for MLG Las Vegas. Some tournaments, like OGN’s Apex league, only determined the map type and allowed the losing teams to select the next specific map. Other events, like the GosuGamer weeklies, have a banning system that ends with just a few maps available.

There is no easy answer to how we should select maps in Overwatch. In other games with different maps, such as CS:GO, at least the basic rules of the game remain the same. But in Overwatch, we have different game modes that have different rules on how to win. Using a system like the GosuGamers one means that teams may never have to play an entire map style, whereas in the Apex system, the teams have restricted influence on the direction of the series due to the fixed game mode order.

DreamHack had a wonderful pick and ban system which both prevented teams from completely banning out a game mode, and allowed for both sides to have notable influence on the way the series would play out. In addition, the new system allowed for better analyst desk segments and clearer predictions that contributed to the broadcast quality.

But so far, the worst map system by far is the one going to be used by MLG at Las Vegas. Instead of giving the teams any influence at all, whether by picks or bans, MLG has predetermined the exact maps for every potential game played. This is an awful system as it massively restricts strategic diversity. Teams cannot play to their strong maps, or prevent their foes from playing theirs.

All 8 OW teams attending MLG Vegas sent a letter to MLG + Blizzard to include a map draft – like a normal esport. Blizzard/MLG declined. ????

But the bigger issue is the sheer number of maps each team now has to practice if they want to win the event. Teams have to prepare for basically every map in the pool. This means that any new strategies will be horribly underdeveloped as any time dedicated to practice has to be divided by the teams. Even a team’s strong maps will suffer as they will have less recent practice on that map and it brings the overall level of play down at the event.

This is a simple fix for tournament organizers. It is never a good idea in any way to completely fix the map pool and I’m in the overwhelming majority that believes MLG made a huge mistake on this front. All we can ask is that more organizers mimic the DreamHack format, or at the very least have a simple map pick system to avoid this horrible error.

The latecomer to announcing their event was the Overwatch Winter Premiere, hosted by Next Generation Esports. Featuring an open online qualifier over a few days from Dec. 10-13, the tournament will culminate in a LAN finals in January. On an initial glance, the event looks promising as any upcoming talent would have a chance to mix it up with the best North American talent.

But that is already a flawed statement due to the dates of the online qualifier. The online portion takes places just days before MLG Las Vegas kicks off. Both events are NA only tournaments, and the top NA teams are already pledged to attending Vegas. Because the qualifiers are online, the teams, in theory, could play both events, but it would be at a detriment to one of the two tournaments.

Obviously none of these options are ideal, and it’s going to force teams into making an awkward decision. Teams are just as likely to simply not play to focus on Vegas then they are to opt to weaken their practice regimen in order to qualify. But the overall issue is that if events are this closely packed together, we are going to start seeing top talent not playing at the same events. If we look at the state CS:GO tournaments are in, we see a perfect example of this, where often times, there are large events occurring at the exact same time. Because of this, it becomes likely that events will be missing many of the best teams.

It’s an issue of maintaining the highest level of play for each tournament. My hunch is that because Overwatch is growing so rapidly, tournament organizers are just looking to grab their share of the viewers. We’re still early enough in the history of Overwatch that player burnout is less of an issue, but if this rate of events occurring continues, then we would have to revisit this issue from a player burnout perspective.

Obviously, this is all about improving the quality of tournaments. On so many fronts, like minimizing technical issues to allow the players to perform, setting up the most competitive formats possible, or ensuring that the top talent can attend in peak form, Overwatch events this month have dropped the ball.

Overwatch is an esport we all want to take seriously, but in order to take it seriously, we need serious tournaments. So I urge tournament organizers to learn from the mistakes we’ve made this month to grow and continue to provide us with excellent events in the future.

Did this month fail to live up to your expectations? Comment below or tweet your answer to us @GAMURScom or @GAMURS_OW