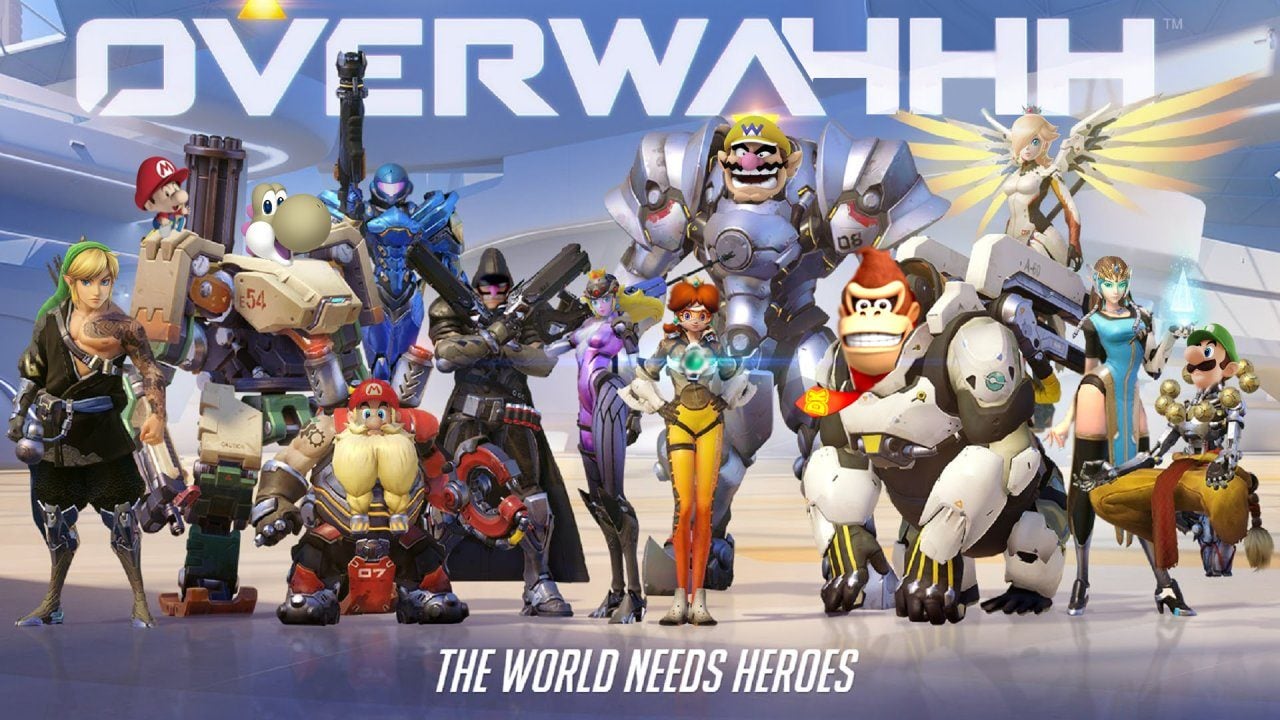 Well, it’s finally happening. Overwatch is coming to a Nintendo Console, the Switch, completing the game’s journey to all major gaming systems currently on the market, including Xbox, PlayStation, and PC.

And, as artists in the Overwatch community will use any excuse to draw up their favorite heroes in new ways, that means it’s time to imagine what a Nintendo-Overwatch love child would look like. And how will we do that, you may ask? With the same pseudo-gambling Blizzard solves all of its problems with—skins.

As it turns out, this list was a lot easier to come up with than we originally thought. There isn’t any hardcore evidence to back up why that may be, it just seems like Overwatch heroes sort of naturally lend themselves to Nintendo’s tried and true creations. Maybe Overwatch Jeff had the Switch move planned all along, we don’t know. What we do know, however, is that Roadhog looks damned good in some Wario suspenders.

And on that note, here are the nine best Nintendo-inspired Overwatch skins we could think of.

Roadhog and Junkrat as Wario and Luigi

This one was one of the first ones we thought of, and it turns out the rest of the fandom probably had similar ideas. Hopefully not the fanfic fandom, though. These guys should really take a shower and rinse off all of that outback dust before they dive into any fanfics. Anyway, it’s pretty apparent why this one’s a great idea. Junkrat’s just one bomb-to-the-head away from using “WAH” in normal conversation, and Roadhog’s big bellybutton just looks like it fits right into some big purple suspenders.

Cool space suit? Check. That’s… pretty much it. Alright, there’s a little more. It doesn’t take much stretching of the imagination to see Pharah’s rocket launcher transposed as an arm-based rocket launcher instead, and her space suit is already very similar looking to Samus’ as it is. Aside from having pointy shoulders instead of Samus’ trademark bubble shoulders on her suit, she really just needs a color palette swap and Pharah is good to go.

Widowmaker already has some aristocratic skins, so this one came to mind fairly naturally. Although it has far less fan art already spread out across the internet, it’s still one of the best, and it’s an interesting take on Peach. If we combine Peach and Widowmaker’s lore, it would go like this: Bowser murdered Mario before he could save Peach, and Peach was then tortured and brainwashed by Bowser’s secret organization to become a sharpshooting, violence-binging killmonger with an attitude. See? Fits so naturally.

We surprisingly couldn’t find any fan art of this combo, but it makes so much sense when you think about it. Both are towering, muscular physical specimens, and both want to conquer Hyrule. Maybe that last one isn’t totally true, but Zarya in some black eldritch-knight-looking armor, a flowing cape, orange hair, and a medieval looking laser cannon that shoots evil deep purple lasers is just the coolest image ever. We’re not sure how the lasers are evil, but just roll with it, okay?

Wrecking Ball as Pikachu and a giant Pokeball

Okay, c’mon, this one’s hilarious. Lightning-themed shield and ultimate, giant talking Pokeball, and instead of hapless squeaks, Hammond just says “Pika!” over and over. It’s a dream come true. Unfortunately, it was difficult to find artwork of Hammond riding a giant Pokeball, and we had to settle for a red mech, but it’s basically the same.

No fan art for this one, either, folks. Just take Winston’s armor off, and give him a red tie with a yellow “W” on it. Easy. Next.

This is another extremely easy on to imagine. Genji and Sheik are clearly both ninjas, even if the Zelda multiverse calls them “Sheikah Warriors.” They both fight very similarly already, and Genji has skins that show off his more human side as-is. Strapping him up in some Sheikah garb would be a very slick legendary skin, and we can all probably agree on that.

We’re running out of the obvious ones, and that means we have to stretch a bit. That doesn’t mean this wouldn’t be equal parts awesome and hilarious, though. Picture a Reinhardt with a big poofy red coat, and the outside of his hammer is now wooden. If that doesn’t make you giggle, nothing will. For some extra comedy, we could even throw a penguin(?) beak on his mask.