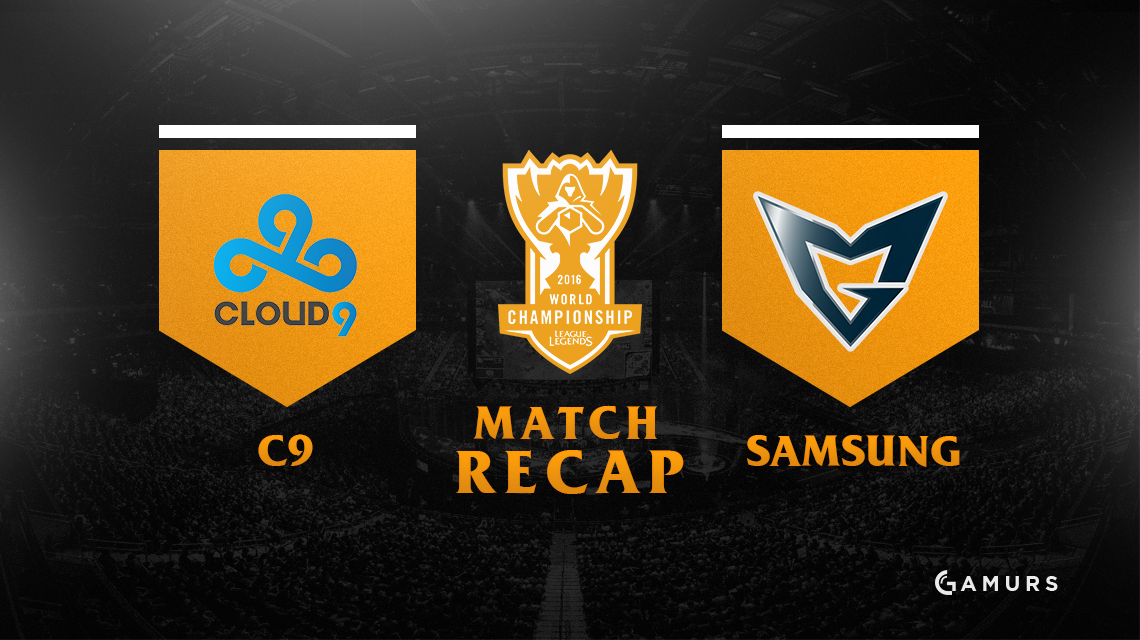 Today’s action in the 2016 World Championships quarterfinals for League of Legends featured Samsung Galaxy of the LCK vs. Cloud9 of the North American LCS.

The stage was set and it was time to enter the rift once again with Samsung Galaxy and Cloud9 starting us off in this best-of-five matchup for a spot in the semifinals of Worlds 2016.

SSG started aggressively towards C9, taking a minor gold lead in the first few minutes with a small and growing CS deficit. However, there was no pressure in the lanes until a failed to gank attempt on Nicolaj “Jensen” Jensen in the mid lane failed to bring C9 to equal terms in gold.

C9 failed a three-on-one gank in the mid lane, gifting Lee “Crown” Min-ho first blood with a kill he should not have been able to get. This also gave SSG the first drake and led to a small gold lead.

SSG had complete control, with vision on the map that would lead to a kill against C9 in the bot lane after their constant aggressive play broke the deadlock. However, with C9 quickly winning a trade in the mid-lane, the gold lead remained the same.

Both C9 and SSG attempted to pressure their lanes, but SSG was able to finally break the top lane matchup with a kill on C9, giving SSG a small but significant gold lead once again.

Backfires would be the word of the day for C9, after another failed attempt to capitalise on an SSG position error ended in C9 losing a life, a tower and another dragon at the 15-minute mark.

C9, in a rough position, looked to turn things around, but ended up getting suffocated, losing more objectives to SSG, who looked to finish off this game fast. SSG was able to take an easy ace against C9 and secure an early Baron.

This eventually led to SSG easily cleaning up on C9’s failed execution and gave SSG a clean game one win.

Here’s pick/ban for game 2! The midlane matchup is opposite this game, who takes it? #Worlds pic.twitter.com/dlJJ8E6QSa

It was now C9’s time to shine and show themselves as semifinal contenders. Going into the game, all the hopes of the NA LCS were in their hands.

C9 started aggressively, which almost gave them an early kill, but it was not meant to be. C9 continued their aggression to make SSG back out, but they weren’t able to get anything from the over-aggression.

C9 did find a fight in the top river, where they were able to force a flash from SSG’s jungler and gain a huge vision advantage in the early game to take a slight gold lead over SSG.

C9 was then able to contest a dragon and took it cleanly to take a slight objective lead over their opponents. The crowd would have to wait until the 17-minute mark for C9 to get another dragon after a successful zone control from C9 meant the objective would go down uncontested.

The gold lead remained level with both teams respecting each other and being patient in their plays, until SSG finally broke the deadlock and got first blood in the bot lane. However, C9 repaid their misplay by taking the first tower of the game straight afterwards in the top lane to bring the gold lead back to level.

C9 was able to take a kill in the mid lane and forced pressure onto the tower, but were unable to get it this time after a successful SSG defense. However, SSG secured their first dragon with both teams trying to get something out of the fight nearby, but both teams left unscathed.

A few moments later, SSG got four kills in the top rive and a Baron after SSG went all-in and capitalised on C9’s poor positioning.

This led to SSG dominating the map, cleaning up objectives and claiming vision dominance, but C9 found a small victory after SSG countered C9’s aggression, even though they still trailed by 7k gold at the 30-minute mark.

Eventually, SSG took their second Baron of the game, which led SSG down into the C9, giving them their second win of this series.

Zac is LOCKED IN for @c9_meteos in what may or may not be the last game of the series! #Worlds pic.twitter.com/hrZOTQUJ0f

This was it. North American’s final hope rested on this one game and C9 needed to pull off the ultimate reverse-sweep to progress into the semifinals.

C9 jungler William “Meteos” Hartman put all his hope into his signature Zac going into this deciding matchup.

C9 put down hoards of pressure onto SSG’s bot lane to deny them creeps. This aggression continued through the early game, just as it had in the previous games. Even with SSG going into the lane three-on-two, C9 was able to put down pressure and take a quick first tower. SSG responded swiftly by picking up two kills in the top and mid lanes.

Back on the top lane, Meteos showed why he is known as a Zac player, helping Jung “Impact” Eon-yeong get a kill up top and put the gold lead back into C9’s favour. However, a collapse in C9’s communication gifted SSG another kill, bringing the gold lead back ever so slightly.

C9 continued to suffer from miscommunication throughout the match, wasting ultimates and summoner spells, which allowed SSG to tie up the gold lead around the 15-minute mark.

A team fight then occurred in the top lane and after what appeared like a C9 equal trade, SSG took out four members of C9 to take control of the game.

Both teams had tried to capitalise on misplays by the other team, but both were unable to take any advantage until the 20-minute mark, where SSG yet again forced a play. C9’s poor positioning cost them their lives and a dragon in the process.

SSG was able to dictate the pace of the game and pick off C9 at their leisure, stopping all of C9’s teleport attempts with quick thinking to increase their gold lead substansiouly.

The crowd had to wait until the 30-minute mark for SSG to try to take a Baron, but C9 not only stopped them from doing so, but got a kill in the process, and attempted the Baron themselves. This attempt sadly did not go as planned, as SSG was able to turn around and get the Baron instead after killing four members of C9.

SSG was then able to rip open the C9 base and take an inhibitor, but that was all they could get at that point in time, despite their 10k gold lead after 35 minutes of play.

SSG looked to pull the trigger on the American dream, applying pressure on C9’s base and leaving no objectives left behind. C9 was forced into a fight, but sadly, it was not meant to be, as SSG ripped open the base, took the win and secured their spot in the semifinals. SSG’s 3-0 sweep eliminated C9 from this tournament.

Congratulations to Samsung! They 3-0 @Cloud9 and will play in the semifinals next week! #Worlds pic.twitter.com/VSjozJ6orn

What did you think about the action in today’s Worlds quarterfinal? Let us know by commenting below or tweeting us @GAMURScom.