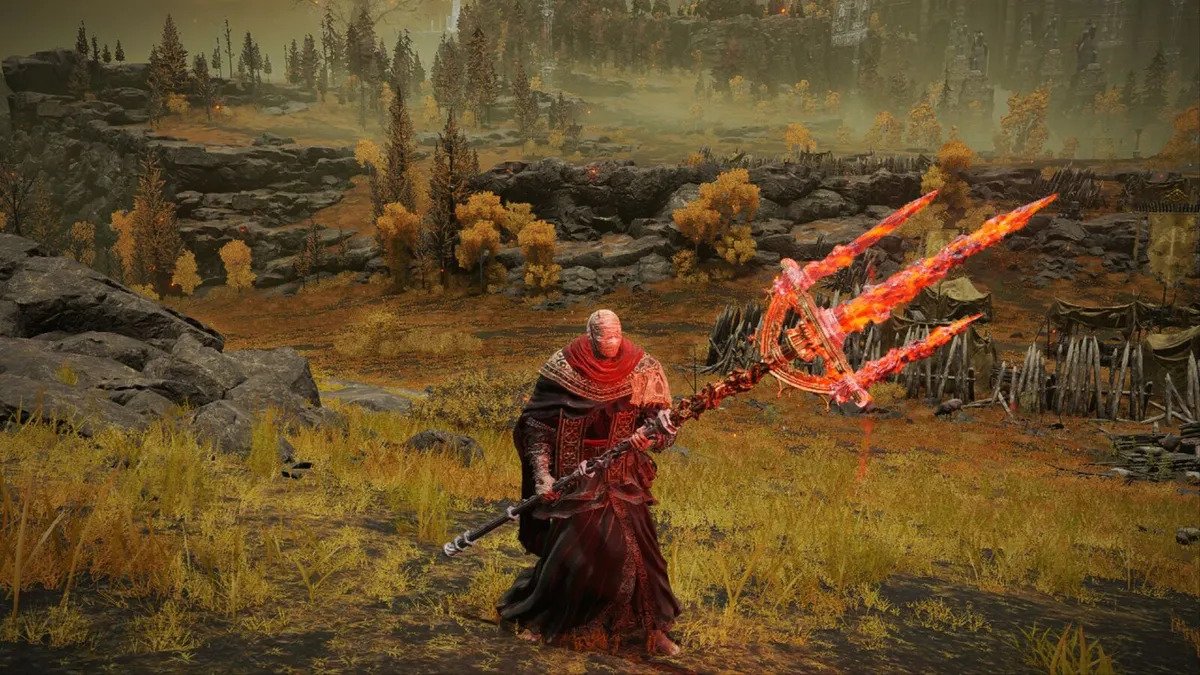 Status effects have been an integral part of battle mechanics in most FromSoftware’s games. They return in Elden Ring, with some of them being familiar to veteran players and others being new additions to the series. To be afflicted by a status effect, the status effect buildup meter has to be full, which is done by being in the presence of the status effect for a while.

There are a total of seven status effects in Elden Ring. This is what happens once the enemy or players themselves get affected by them:

Today we will be highlighting one status effect: Blood Loss, or simply “Bleed.” This effect is particularly strong against human invaders and bosses with high health pools due to its mechanic of simply eliminating a huge chunk of HP at once upon affliction. This effect bypasses their defenses and any type of armor they might have, making it a powerful status effect.

There are a few weapons that can inflict Blood Loss status by inflicting Bleed buildup per hit. Here’s a list of 10 of the best Bleed weapons, in no particular order. Each is strong in its own way and they cater to a variety of play styles.

Eleonora’s Poleblade is a mix of Dexterity and Arcane scaling. The damage of the weapon primarily scales off Dexterity while the Blood Loss effect procs off the Arcane scaling. The weapon also deals elemental damage by adding Fire damage to its attacks, doing overall mixed damage along with Blood Loss. The Bleed effect procs faster using its weapon ability, Bloodblade Dance, which launches a barrage of slashes.

This weapon can be acquired by defeating Eleonora when she invades the player in the Second Church of Marika in the Altus Plateau. This invasion can be triggered at the end of Yura’s questline while he lays dying and entrusts his dying wish to the player. If the player hasn’t progressed far enough in Yura’s questline, the invasion will still trigger regardless after approaching the Site of Grace in the area.

The Hand of Malenia is perfect for players who got so destroyed by Malenia that they decided to become Malenia themselves. As a katana weapon, it has a natural Bleed proc on attack. This weapon class also has great attack speed and scales primarily off Dexterity with Strength as a secondary attribute. The Waterfowl Dance is reminiscent of Malenia’s most powerful attack and it also applies constant Blood Loss buildup with each hit.

This weapon can be acquired after gaining the Remembrance of the Rot Goddess that drops upon Malenia, Blade of Miquella’s defeat. It can be crafted by the Finger Reader Crone at the Two Fingers in Roundtable Hold.

The Meteoric Ore Blade is a katana that is perfect for players going for a quality build. The reason for this is because the weapon scales primarily off three different stats: Strength, Dexterity, and Intelligence, with a respectful D scaling on each of them initially. Being a katana means natural Blood Loss build-up and its Gravitas ability just makes that even easier by pulling enemies in closer to get in range of the Meteoric Ore Blade. This makes for easy capturing of those pesky invaders that tend to run away when the fight does not go their way.

This katana can be acquired in southern Caelid at the Caelid Waypoint Ruins area. Thankfully, there are no bosses here but there are a few annoying enemies and a Servant of Rot to deal with. Players need to navigate their way down after finding the stairs and open a chest at the very end of the room to get the Meteoric Ore Blade.

Mohgwyn’s Sacred Spear is a holy artifact of the Mohgwyn Dynasty. This weapon is of the great spear type and scales off three different stats, with Strength and Arcane being the primary stats and Dexterity being the secondary stat. Being a great spear, the attack speed of this weapon is comparatively slow to the other weapons on this list, but the Blood Loss procs more than make up for it. This weapon also deals mixed damage of physical and Fire attacks, making it effective against highly armored targets.

This weapon can be acquired using the Remembrance of the Blood Lord that drops from Mohg, Lord of Blood after defeating him in Mohgwyn Palace. It can then be created by the Finger Reader Crone at Roundtable Hold.

Moonveil has drawn the attention as well as ire of players worldwide. This katana was said to be too strong at one point and even after multiple nerfs it can still shred players and bosses alike. Being a katana means natural Blood Loss build-up per slash and it scales primarily off Intelligence, which is quite surprising for its weapon type, with a secondary scaling off Dexterity and a tertiary scaling off Strength.

The reason for its Intelligence scaling is its weapon ability, Transient Moonlight, which fires off a flying slash of pure magic damage at its enemy. This ability procs Blood Loss as well while also causing a huge amount of stagger with each consecutive use, being able to stagger-lock bosses into oblivion. Moonveil isn’t as easy to acquire for newer players because they will have to venture into the Scarlet Rot-infested Caelid to get it. This weapon drops off the Magma Wyrm boss in Gael Tunnel in the southern section of Caelid.

Morgott’s Cursed Sword is a curved greatsword that is pretty light for its weapon type. Being a greatsword entails a primary Strength scaling. However, since it is a curved greatsword, it scales off Dexterity instead, with Strength being a secondary stat. It has an Arcane scaling as well, which adds to its Blood Loss procs. The Cursed Blood Slice skill it provides uses Bloodflame effects on strike while also adding to the Bleed buildup over time.

Naturally, this weapon dominates in PvP due to its rapid Blood Loss procs. It can be acquired after obtaining the Remembrance of the Omen King upon Morgott, the Omen King’s defeat in Leyndell, Royal Capital. As is with any boss weapon, players are required to get it crafted by the Finger Reader Crone at the Two Fingers in Roundtable Hold.

Nagakiba is often touted as the sibling to the Uchigatana, both of them being katanas with similar stats. Only the Nagakiba scales a little better off Dexterity primarily with Strength being secondary. It can also be infused by Ashes of War, making it incredibly versatile in the right hands.

Reduvia is the only dagger-type weapon on this list and with good reason. Dagger weapons are generally limited in terms of hand-to-hand usage because of their terrible attack range. Thankfully, the high attack speed of this weapon combined with its great Arcane scaling makes the Blood Loss build up pretty quick at max level. If that was not enough, its special ability, the Reduvia Blood Blade, launches a malicious-looking projectile at the enemy, causing huge Blood Loss buildup from a long distance.

This weapon can be acquired by defeating Bloody Finger Nerijus outside Murkwater Catacombs. He will invade the player which also triggers Bloody Finger Hunter Yura to come to help the player, making this an easy fight early in the game.

This list would not be complete without mentioning the king of all Bleed weapons, the Rivers of Blood. This katana scales primarily off Dexterity and Arcane with Strength as a secondary stat. Due to this, the Blood Loss build-up is incredibly high already and a good investment into Arcane will do wonders for its procs. Adding to it, its unique ability Corpse Piler utilizes this weapon’s high attack speed in a flurry of Blood Loss procs with every slash. The end of this six-hit combo almost always guarantees a Blood Loss affliction along with a stagger at the end if the Arcane values are high enough.

Due to the pure power of this weapon, it is naturally scaled for the end-game. This is made more evident due to the fact it is acquired after defeating Bloody Finger Okina after he invades the player outside the Church of Repose in the Mountaintops of the Giants area.

Being the starter weapon of the Samurai class, most players would not think much about this weapon, but the Uchigatana maintains its utility throughout the Dark Souls games into Elden Ring. It is widely considered the best starter weapon with it being able to scale primarily off both Strength and Dexterity. Like a katana, it also has a natural Blood Loss build up and since it is a non-Legendary weapon, it is incredibly flexible by letting players use their chosen Ash of War on it.

This weapon is acquired immediately when starting off as a Samurai. If not, other starting classes can acquire it in the Deathtouched Catacombs on Stormhill in Limgrave.

The Winged Scythe is a unique choice for a Bleed weapon, especially one that scales off three different stats: Strength, Dexterity, and Faith. Being mostly a Faith scaling weapon, the Winged Scythe has a mix of physical and Holy damage. Add to that, the Bleed buildup on this weapon, in combination with its weapon skill makes enemies take a lot of damage while also preventing them from healing.