As we move into the final rounds of the playoffs in most major regions, amid the full throes of the tank meta, we find ourselves very much in the hour of the hyper-carry ADC. Hyper-tanks are the standard top-lane pick. Tank junglers are finally getting professional play again, and even those hold-out Lee Sins are picking up Cinderhulks. Even mid laners are getting in on it – look at Cho’Gath, Urgot, or the return of Ryze (in China at least). Sustained damage has become a necessity – and, while ADCs may complain about how ineffective they feel at times, they are in truth more important than ever.

Kog’Maw initially returned to meta status on the back of the Juggermaw, but has seen its share of play in more conventional protection comps too. Kalista’s luster has worn off a little in the Western world, but she is still a high priority pick/ban in Korea and China against any team that has proven they can play it. Jinx, meanwhile, continues to be a hard sell in the East (though that might be changing – notably, Jin Air brought it out twice in their playoff series) but has been employed effectively by several Western teams.

For long-time League fans, there’s two notable absences from that list. One is Vayne, whose absence is fairly easily explained (in brief: weak laning phase, short range, matches up poorly against numerous meta picks in all lanes – might get a bit more competitive attention with Maokai and Hecarim nerfs if the tank meta in general survives upcoming nerfs). The other more interesting one is Tristana. The quintessential late-game hyper-carry for years at a time, she’s been seen just four times across two teams (EU’s SK Gaming and China’s OMG), both times played by ADCs who have a claim at being their region’s best, both of whom went 0-2 en-route to an upset playoff series loss on her.

The feeling one gets about Tristana is that among the community – both in terms of the professional scene, and the wider fanbase – there is a fundamental misunderstanding on what Tristana brings to the table right now, and there has been since her rework. The one sentence summary is this: Tristana is not a late-game hyper-carry anymore.

The Tristana rework and non-explicit consequences

On the surface, that seems odd. In the first place, there’s what Riot said when they reworked her:

Old Trist was a late game powerhouse who didn’t really have clearly defined weaknesses. Her power dipped in the mid game, yeah, but when you look at other super powerful late game carries (think Vayne or Kog’Maw), she just didn’t have the same Achilles heel-type glowing red spots for her enemy team to pew pew at.

The article then goes onto talk about better defining her power. While there are no specific references to keeping her as a late-game carry or otherwise (the closest being a hint towards her power being “windowed”), the reaction that this would continue to be her role would not be an unfair one, especially considering the relatively modest nature of the rework – three abilities remained essentially identical, and the fourth (E, Explosive Charge) gave her a greater capacity for AoE damage in team-fights.

The issue is that, in a similar vein to the Zilean rework, Explosive Charge is an ability that looks nice at first glance for teamfighting, but in practice has issues with actually being able to land it to full effect. With abysmal bases when uncharged (100 + 110% bonus AD at rank 5), it effectively locks Tristana into focusing onto the Charged target for multiple seconds in order to trigger it, while also giving the opposing team full information of her intentions. If Tristana can be disengaged off her targets for just a couple of seconds or so, it’s likely two relatively long cooldowns (Explosive Charge and, most likely, Rapid Fire) expended, leaving her completely reliant on unempowered auto-attacks in a fight.

The other issue is that, in return for gaining Explosive Charge, she lost Explosive Shot. While this could have been written off as an inconvenience in the early season meta (with damage-oriented top laners common and bruiser junglers ubiquitous), it now – at the time when hyper-carry ADCs are at their most necessary – becomes clear how much of a loss that was. Without the ability to trigger Grievous Wounds on a target, Tristana can deal with neither Cinderhulk junglers nor hypertank top laners. When teams are so desperate to fit answers into comp somewhere that the likes of Meteos and Kikis are experimenting with Gnar there, and the words “top-lane Varus” were mentioned on a LCS broadcast, that is a crippling weakness. Of the three picks mentioned at the start of the article, only Jinx lacks a form on-demand percentage health damage, and even she has the execute on her ultimate.

Tristana is simply not suited to being a late-game hyper-carry, particularly in this meta. What we have lacked so far is a true show of why that’s the case. OMG’s Uzi picked it in the first two games of their series against LGD and lost both games, but LGD snowballed the first game before he would have been effective and we have only a handful of still under-gilded teamfights to go off in the second as to drawing any conclusions on the pick’s problems. 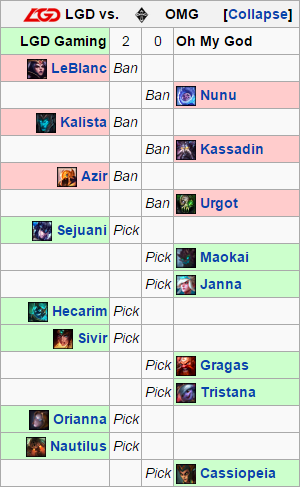 The same thing happened in both of FORG1VEN’s games for SK against UoL – both games saw UoL build up substantial early leads, and while there’s some clues there there in a couple of fights around Baron, these still came at substantial gold deficits. It does highlight something that was already known regarding Tristana’s weak early game, but in all games, mistakes left her too far behind to execute an effective strategy even if played optimally. 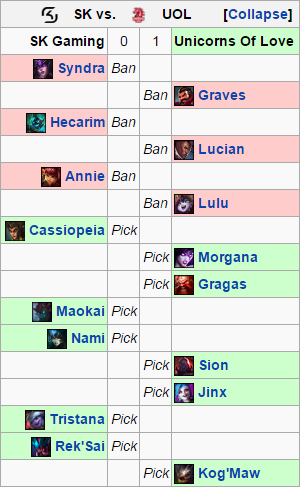 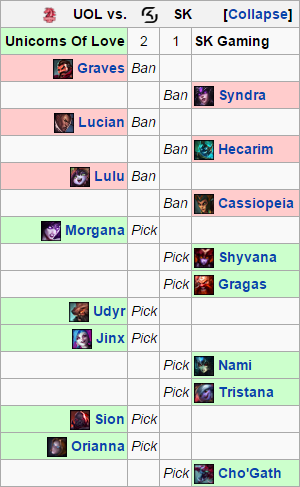 The new Tristana: anything but a teamfighter

With that being the case, instead of waiting for a Tristana to conclusively fail, it seems more useful to look at a successful pick. Gambit Gaming planned some smart comps around it on patch 5.3 (see their games against Copenhagen Wolves and ROCCAT in week 6), but the most recent example I know of on 5.5 or later came from the EUCS playoff series between Reason Gaming and Gamers2. This is how the pick-ban phase went in Game 1: 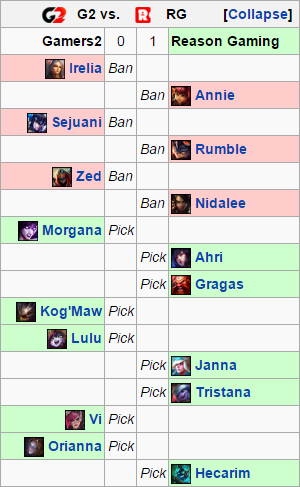 At first glance, Reason Gaming’s comp seems a little incongruous, particularly if we’re considering Tristana as that old-Tristana prototypical late-game carry. The top, jungle, and mid are all oriented around the mid game, while the bot lane consists of Tristana and a heavy disengage support. Their opponents are all-in on the late game (bar Gilius’s Vi), running three farm lanes, featuring the Lulu-Morgana anti-engage combination, and looking to transition into a conventional Juggermaw.

However, consider this: what if the idea of Tristana is, rather than to scale up for late, to instead serve primarily as an aggressive mid-game split-pusher and auxiliary pick champion? If considered in that context, we suddenly start to see the strengths of the comp. Rather than aiming to go toe-to-toe with a late-game Kog’Maw, the team instead looks to aggressively push towers, force 4v4 fights and avoid 4v5 fights, and take the team down before it has a chance to scale. The Janna pick helps bring an early end to the laning phase by punishing any withdrawal from lane with a potential tower take, Hecarim and Ahri have very strong mid-game power spikes, while Gragas and Janna bring powerful disengage through their ultimates.

Tristana has acceptable offensive wave clear through Rapid Fire and the Explosive Charge passive – it’s not on the level of a Sivir, but it’s enough. Explosive Charge’s active can safely and efficiently be procced against towers, and the changes on 5.7 (Explosive Charge’s cooldown lowered by AAs while Rapid Fire is active) have further strengthened that. Rocket Jump and Buster Shot give her as strong an escape as any dedicated split-pusher. In a pick scenario, she can put down good damage onto a single target and give strong chase.

While not the cleanest game – it is, after all, a Challenger Series game – the strengths of the Tristana pick can be seen. In particular, the sequence from 36:00 (VoD time) to 37:30 is worth watching. Look out for the Tristana pick in the upcoming Promotion Tournament clash if it’s not banned – Giants Gaming aren’t generally a late-game team (Werlyb Jax carry performances notwithstanding), but there has been enough experimentation with such comps under 5.5 by them to consider it as a possibility.

The ingredients for success for a Tristana pick

So, what does a Tristana pick need to succeed?

Post-rework Tristana has a place in professional play. The issue is that it’s an extremely specific place that’s quite unlike where she was prior to her rework. It’s not entirely surprising that, for the most part, teams have failed to adapt given her mid-season rework and the pressure to stay on top of a rapidly shifting pool of strong ADC picks, and that the only teams I know of to harness her well (Gambit and Reason) are known for innovation (Gambit hardly needs explaining; Reason Gaming have Veggie, of S4 ROCCAT fame, at the helm, and Celaver, of the same fame, at ADC).

While the meta is particularly terrible towards her in her historic role at the moment, she is actually in a theoretically good place as a response to the predominant comps. She is however limited by the sheer weakness of her laning phase, and it would be surprising to see a team in any region bring it out correctly in the current split at this point. There should still be interesting opportunities for her post-tank meta, but it’s hard to see her ever returning to the state of ubiquity she reached at times before her rework – nevertheless, she’s an interesting niche pick possibility.