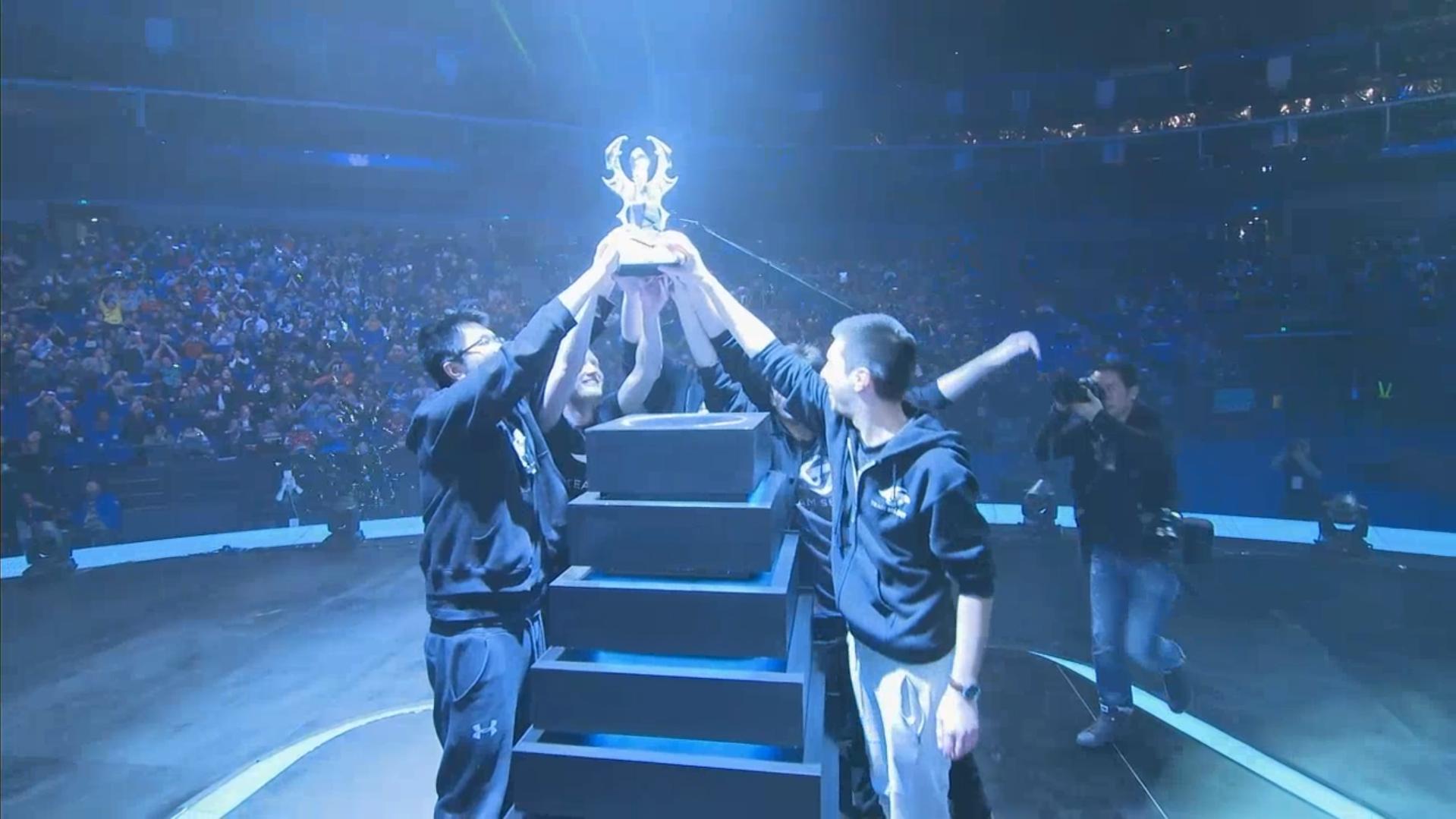 Level one strategies are a very key part in every competitive League Of Legends match, because no matter what, all games start with an even playing field where no team has a gold or vision advantage. The first two minutes are very crucial, because lane match ups, early vision control and therefore early advantages can be generated trough a superior level one strategy.

In this article I will take a look at the level one in game 1 of the first round of the Korean qualifiers between the Jin Air Green Wings on blue side and Najin e-mFire on red side. The video can be found here.

Najin (the red team) runs out of their base together and heads united into the top side jungle, because they want to take full control of the top side jungle and probably find a few players from Jin Air. If they ran into the whole Jin Air team their fighting chances would be superior due to a multi target CC by Alistar and Ashe as well as a possible stun from Elise.

Jin Air (the blue team) on the other hand has set themselves the primary goal to keep their own jungle safe with a very standard defensive pattern. They split up to cover every entrance of their own jungle because they do not want to take any risks with a level one fight.

Every jungle has four entrances from the river. Three of Jin Air’s entrances are respectively covered by Malphite, Rek’Sai and Gangplank. The fourth entrance is at the bot lane tri brush, where their bot lane is heading.

Najin has a very clear plan whereas Jin Air is more flexible and able to react to anything Najin can do. As a result Najin is not hesitating because they need to get into the enemy jungle quickly to make their greater strategy work, as will be seen later.

Najin moves straight forward into Jin Air’s top side jungle. When they are moving in they are seen by Chaser on Rek’Sai. He retreats instantly after dropping a ward [1]. That way the entrance is still covered until around 1:40. While he is runnig back you see the rest of Jin Air immediately invading deep into their opponent’s bot side jungle themselves to set up some vision.

Furthermore Malphite considers to invade Najin’s top side jungle as well but will finally decide against it, because he would very likely be caught by Najin if they return from their invade.

However he cannot stay at his entrance because the threat of getting caught would be even bigger. And if he were to retreat to his turret Najin might decide to try and kill him there. Therefore going forward is the best option for him in this scenario.

At this point Najin is in exactly the position they want to be in. They are able to get deep into enemy territory to place deep wards which will help them control the first minute of the game.

Both Teams ping out the spots where they want to place wards. Najin have left a ward in their own jungle to make it impossible for Jin Air to enter top side jungle from the river and cut them off without being seen. They assume that the top side jungle is empty by now because they have seen no one except Rek’Sai who they chased away. Malphite is hiding and Najin has no idea where he is. They most likely expect Jin Air to invade their jungle which is exactly what is happening.

Jin Air is a little late on the invade for the fact that they are the team reacting to Najin’s strategy instead of executing their own. That is not a problem however, because they are still able to get into position in time. It is also worth noticing that both supports are leading the charge for their respective teams, which is very common because they are a bit tankier thanks to HP glyphs.

It is very key that Malphite is able to get out alive. Giving an early kill to one of Najin’s carries would be very bad for Jin Air and result in a great disadvantage. That is why Jin Air keeps him hidden as long as possible and he finally starts his recall to get back to the safety of his own base.

Working with the Information

Both teams have now placed their wards and are retreating from their opponents’ jungle. Jin Air see LeBlanc and Fiora leave their jungle through the ward Rek’Sai placed earlier. They do not see the other champions but they saw five players entering their side earlier which is why they know that Elise, Alistar and Ashe are either still in their jungle or on their way to top lane.

Both teams saw the other placing a ward in their lane between the inner and the Inhibitor turret.

Furthermore Najin knows that Top Jungle is empty excluding one brush which they did not check [1]. That means that Jin Air must be bot side. Najin want standard lanes and therefore they tell their duo lane to recall and go to the bottom lane. Malphite on the other hand is finishing his recall without being seen by any member of Najin and follows his team into the bot side jungle to group with his jungler for the first camps.

Jin Air does not know what exactly Najin is planning even though they are most likely able to read the situation correctly. That means there is still a possibility that Najin wants to lane swap and control the whole top side of the map while giving up the bottom side. Thus Malphite cannot risk to go to the Top Lane instantly.

Najin want 2v2 and 1v1 lanes because their top laner Fiora needs a lot of farm to be able to carry later in the game. Therefore they put a lot of effort into getting her a solo lane against only one opponent, which facilitates her early game farming.

Ashe and Alistar are on the way to the ward which they know was placed earlier. They do not care if they get seen because at the time Jin Air knows their position, it would be very hard to recall and get to lane in time if they want to avoid standard lanes.

Their line of wards in the top side of Jin Air‘s jungle guarantees them that no player from Jin Air can enter without Najin noticing. There is no possible way (aside from Malphite’s Teleport) to get from the bottom side of the map into the top side jungle without being seen by either a red ward or a red turret. This pretty much ensures them standard lanes.

From there on both top laners meet their junglers to help them with the early camps, which is very standard in competitive play. After that, both top laners recall and enter their lanes starting off the laning phase.

Najin’s level one plan let them decide the lane match ups. After forcing Jin Air to one side of the map and taking vision control of the other, they could either keep Ashe and Alistar top to ensure a lane swap. Alternatively they can do what they did this game and recall their bot lane to get the 1v1 top lane and the 2v2 bot lane. Carries like Fiora benefit from farm a lot more than a Tank like Malphite, hence they prioritize donating farm to her over denying farm from Malphite.

Jin Air on the other hand react accordingly by not giving away too much information. They don’t mind the 2v2 match up, because Kennen and Kalista are a stronger Duo Lane than Alistar and Ashe. Malphite will also be able to hold his own against Fiora in the early game.

Overall Najin gets a slight mental advantage because their plan worked exactly as planned. But from a strategic point of view both teams can be happy with the lanes they got.