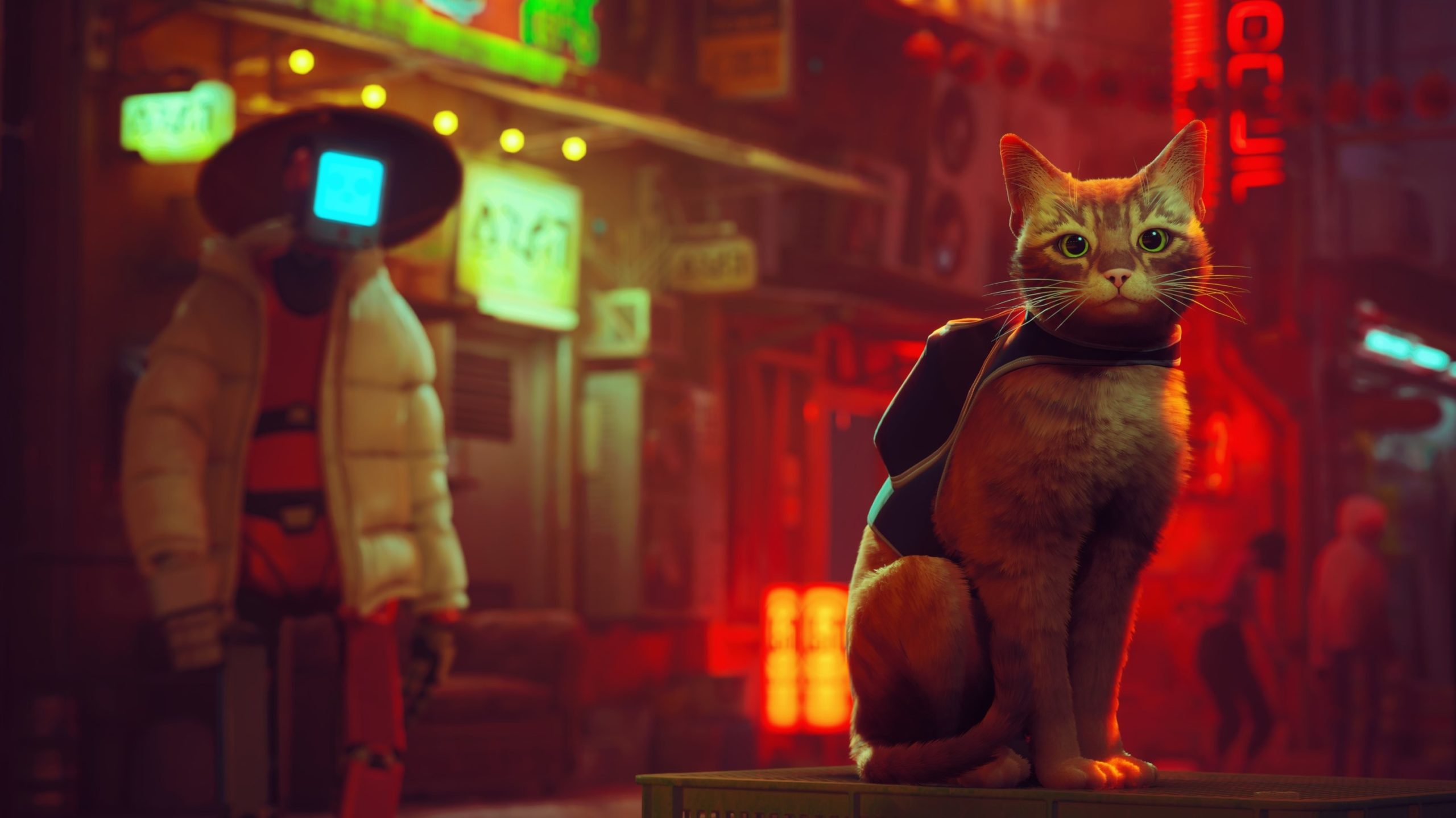 There’s just something special about when a cat chooses you to sit on, rub against, or cuddle with. And now, video game fans can have that all in the palm of their hands with Stray.

For lovers of cats and video games, Stray is a no-brainer purchase. The protagonist of the story is a cute orange cat who remains nameless throughout the game. Players are tasked with navigating the cat through a strange city inhabited by robots, and the main objective is to get back home.

Although there are a ton of cat-themed games out there, such as Calico, Cat Cafe Manager, and the Cat Quest games, Stray seems to be one of the first indie games that took the cat theme to new heights with beautiful scenery and good gameplay.

Stray has a well-thought-out and intriguing story, theme, and setting, but the feature players are likely to praise most is the ability to navigate the world from the eyes of a cat and experience all the quirky things cats do first-hand. The cat can push objects off ledges, meow with the dedicated meow button (which even works in cutscenes), scratch various surfaces around the world, and sleep in a few different places. That said, there are some features missing that would have taken this game from great to game of the year. There are no customization options for the hero cat, no photo mode, and no map to guide players throughout the game—elements that have become standard in most games.

Stray has a strong story, theme, and setting

The story in Stray is cohesive and well thought out, and players will have a strong interest in finding all of the little tidbits the developers have hidden throughout the game to add to the lore.

Players will control the cat when it gets lost in a strange city that is populated by robots. These humanoid robots mimic human life, even though all of them are dead. During the course of the cat’s adventures, it will be able to meet many different kinds of robots and interact with them in several ways.

Some robots don’t take too kindly to the furry protagonist, and others will react positively to a meow or a nuzzle on the robot’s legs. It will be up to the player to figure out which robots are friends and which are quite annoyed with the cat’s existence. Some of the robots will be helpful to the cat, while others will react in an interesting way or provide more lore when talking to them.

The robots have all locked themselves into the city to keep the Zurks out, which are little blood-sucking creatures that will jump on anything that crosses their sights. The cat will have to work with the robots in the city to help it get past the Zurks and find its way home.

The setting is particularly well-crafted and the developers put a lot of attention into the details of the slums of the city, such as graffiti on the wall, adding personality by way of items in a robot’s home, or little areas where players can ask B12 to translate writing on the wall, which adds to the lore. Players will need to solve some puzzles while they explore the city and collect memories for B12, the little robot that helps the hero cat navigate the city.

Although the city is safe for our fluffy hero, most places outside the city are not. For those who thought Stray would be a cute cat game for their children to enjoy, let this be your warning: This game is not for the faint of heart. There is an element of horror in Stray that many children may find frightening, which is why the rating is for players 10 and up.

The developers of Stray had a lot of real-life references for the cat protagonist hanging around the studio and in the developers’ homes. On Twitter, many of the team members showed off their cats in their profile pictures, and there were several cats the developers used for different reference points for the cat hero.

Jun was the studio cat and is the level artist Clara Perrissol’s cat. Murtaugh, who was used as the visual reference for the hero cat, is BlueTwelve Studio co-founders Koola and Viv’s cat, and animator Miko’s cat Oscar was also a studio cat and used as a reference for the animation. Also included in the mix are Tao and Lichi, who are Stray producer Swann Martin-Raget’s cute kittens. 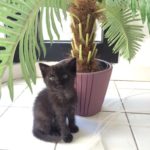 The cat in the game is a fairly accurate representation of what a cat looks, feels, and sounds like in real life. When you put your cat down to sleep, it feels like you have a cat in your hands with the PS5 controller’s slight vibration and the purring noise that comes from it.

For example, there are several fans attached to buildings around the city, and this writer’s cats would certainly be distracted by the ribbon attached to them, flowing in the wind. But there are no interactions with this ribbon. It would have been very cat-like to have the hero cat get distracted against the player’s will to play with the ribbons for a few seconds.

There are a lot of items in the game the player can interact with that will let them release their inner cat, including some rugs and walls to scratch, pillows to sleep on, and plenty of things to knock off of ledges.

Stray is missing some staple features

There are many things to be excited about when playing through Stray for the first time, but there are also some big things missing that players might be disappointed about. The first and most complained about on social media so far is the lack of customization for the protagonist.

There’s been no official explanation as to why the cat can’t be customized, which would appeal to many cat owners who want to make the cat look like their own. The missing feature likely won’t take away from the title’s sales or people’s enjoyment of the game, but it is disappointing for cat owners whose cats don’t look like the one in the game.

Another big feature that is missing in the game is a photo mode. For such a beautifully crafted setting, one wonders why a photo mode wasn’t included in the game for players to enjoy and share their meticulously crafted photos. There are many instances of the cat traveling in a metal bucket that would make for some excellent photo opportunities, but the only option given to players is the screengrab feature that PlayStation has built into its consoles or the print screen button on a computer. There are a ton of beautiful places for the cat to have its picture taken, but there’s no good in-game photo mode to really tap into your inner photographer.

The last feature that players might be missing is a map of some sort. It can make for a frustrating time to find things, especially because the map is so vertical. Players might find themselves wandering around the map trying to find where a character went after a long bout of exploration. The map itself isn’t too big in most areas, but considering its verticality, more direction other than a couple of signposts pointing to some town staples might have been warranted.

Stray is a fun and unique game that is hampered by a lack of maps, navigational tools, and inspired writing

Even if it doesn’t work toward an achievement or to further the story, the developers of the game have crafted the lore so well that players will find little tidbits of information interesting. The mystery of where B12 came from, how the humans have died, and how the Zurk came to be are all answered through a plethora of different sources, including writings on the wall, interactions with robots, and from B12 itself.

Although the story is interesting, the writing can sometimes feel generic. The game heavily leans on the “I can’t go in, you do it for me” trope, and there is a lack of depth to many of the characters that can make them difficult to care about.

The lack of a photo mode is a big miss for this game, and the absence of navigational tools can make going through the game frustrating if you get stuck in the course of the story. Players could take this as an opportunity to explore, but most times that exploration will not lead to anything that will further the story. B12 gives some hints, but often times they will not lead the player to any new conclusions.

Stray takes about eight hours to play through the story and about 10 hours to complete all of the collectibles and achievements. There are plenty of fun achievements to hunt for in the course of the game and many of them encourage exploration.

The game is priced at $29.99 or free if you have a PS Plus Extra or Premium subscription, and the price tag feels justified for the quality that Stray gives players. It doesn’t feel hard to 100 percent complete the game, either. The hardest achievement in the game is likely to finish the game in two hours.

For players who prefer to play games on easier modes, 100 percent finishing a game can feel very out-of-reach since many of them require the completion of hard mode to get all of the achievements. Stray may be a great buy for those who like to attempt to complete a game and all its achievements without the frustration of playing a mode they don’t enjoy.

Stray is available on three different platforms: PS4, PS5, and Steam. Right now, the game is 10 percent off on Steam if you pre-order it. Players who are interested in the premise of the game will likely enjoy it no matter what it’s played on, but those with a PS5 will have a different experience, mostly because of the haptic feedback on the PS5 controller. If you own a PS5, it is recommended that you play it on that console to get the best experience playing through the game.