The Eye of Twilight is back! Patches 5.7, 5.8 and most importantly, 5.11, were all excellent for this seemingly forgotten ninja. Since these recent buffs, Shen has already seen very significant pick/ban importance in the European LCS and some limited (yet growing) play in the North American LCS, LCK and LPL. With patch 5.11 having been implemented less than three weeks ago, it is quite likely that he will see an increase in competitive play as other regions seek to enlist the help of this remarkable top lane champion.

Season 3 Success and Fall from Grace

Shen’s prominence in Season 3 was undeniable. At the Season 3 World Championship, Shen was the second-most contested pick and was surpassed in priority only by Zed. Shen was banned 34 times, picked 25 times and boasted a notable 52% win rate.

However, all of this changed after Season 3 Worlds and Shen disappeared from the meta. The reasons for this were many. For one, the top lane meta shifted to more effective split-pushers including Nidalee, Ryze, Maokai, Shyvana, Gragas and Trundle. While Shen still offered utility, he was unable to match these champions in wave-clear, damage (most of Shen’s being single target) and dueling potential, as many of these champions featured higher base-damages. Shen’s taunt radius was nerfed rather severely in patch 3.13, and while this was slightly fixed in 3.14, his taunt remained a shadow of its former self. (Season 3 Worlds was played on patch 3.11, so these nerfs did not affect his performance there.) Sunfire Cape’s nerf on patch 4.1 also hurt Shen, as this was essential to his wave-clear and role as a front-line tank. Finally, prior to the recent changes, Shen suffered from a lack of magic resistance per level. All of these factors led to Shen being all but forgotten during not only Season 4, but also the Spring Split of Season 5. However, a demonstration of superior judgment on behalf of the Riot balance team would eventually cause this ninja to return from the shadows.

Shen experienced a series of buffs beginning with patch 5.7. On this particular patch, the cooldown of Shen’s ultimate, Stand United, was significantly reduced. While not exactly enough to remedy the barrage of nerfs he was previously subjected to, this buff offers the potential for Shen to make more life-saving plays:

Patches 5.9 and 5.10 were silent on the Shen front. Patch 5.11, however, offered some very well-needed changes to Shen’s kit: 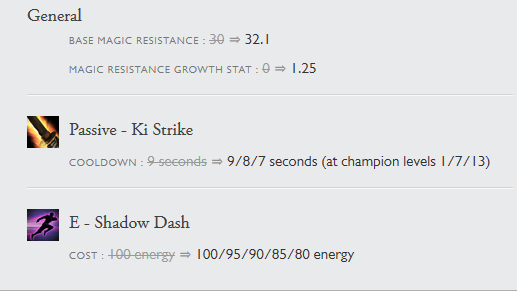 These buffs, especially the magic resistance per level, have made Shen relevant once more. Shen has received the most play in the European LCS, yet his win-rate in said region sits below 50%. Some of Shen’s previous issues still remain. His taunt radius is still lower than it once was. He still offers minimal AoE damage and one somewhat unreliable form of crowd control. What he does offer is an excellent ultimate on a fairly short cooldown, a strong front-line presence and a utility-oriented (rather than dueling-oriented) split-push. A well-placed taunt onto multiple enemies is still extremely effective. Also, Shen is a welcome addition to either team fight or poke compositions, as his taunt can be used for either peel or engage. However, whether or not Shen will become (and remain) an integral of part of the top lane meta remains to be seen.