Minecraft is a game known for its nearly limitless possibilities and is a sandbox for creativity. And a Minecraft player named lovelyjzb recently demonstrated just how creative someone can be when they showcased an impressive build, bringing the worlds of Pokémon and Minecraft together in a Psyduck-themed island that boasts a detailed steampunk interior.

The builder shared their creation to Reddit on Feb. 10, with 11 photos highlighting different views of both the colorful exterior and intricate interior. Every angle of this creation seems more detailed than the last, and no matter where you look, there’s always something new to discover. 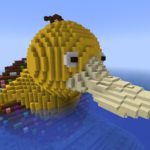 The creator also commented under the post, saying that the server they created this build in is semi-survival mode, which allowed them to fly. But they still had to put in the effort of gathering all of the materials for the build. Nearly every material in Minecraft seems to be a part of this build and gathering all the resources is no easy feat.

Another aspect that makes this build so impressive is the creator’s ability to take objects meant for other uses, like trapdoors, buttons, and grindstones, and use them in new, purely decorative ways. This build is also a clever showcase of the newly added copper ore since copper blocks at various oxidation levels appear all throughout the interior of the build.

This unique build is an amazing demonstration of the impressive creativity that exists within the Minecraft community. In the world of Minecraft, the only limit is your imagination, so get out there and build something incredible.