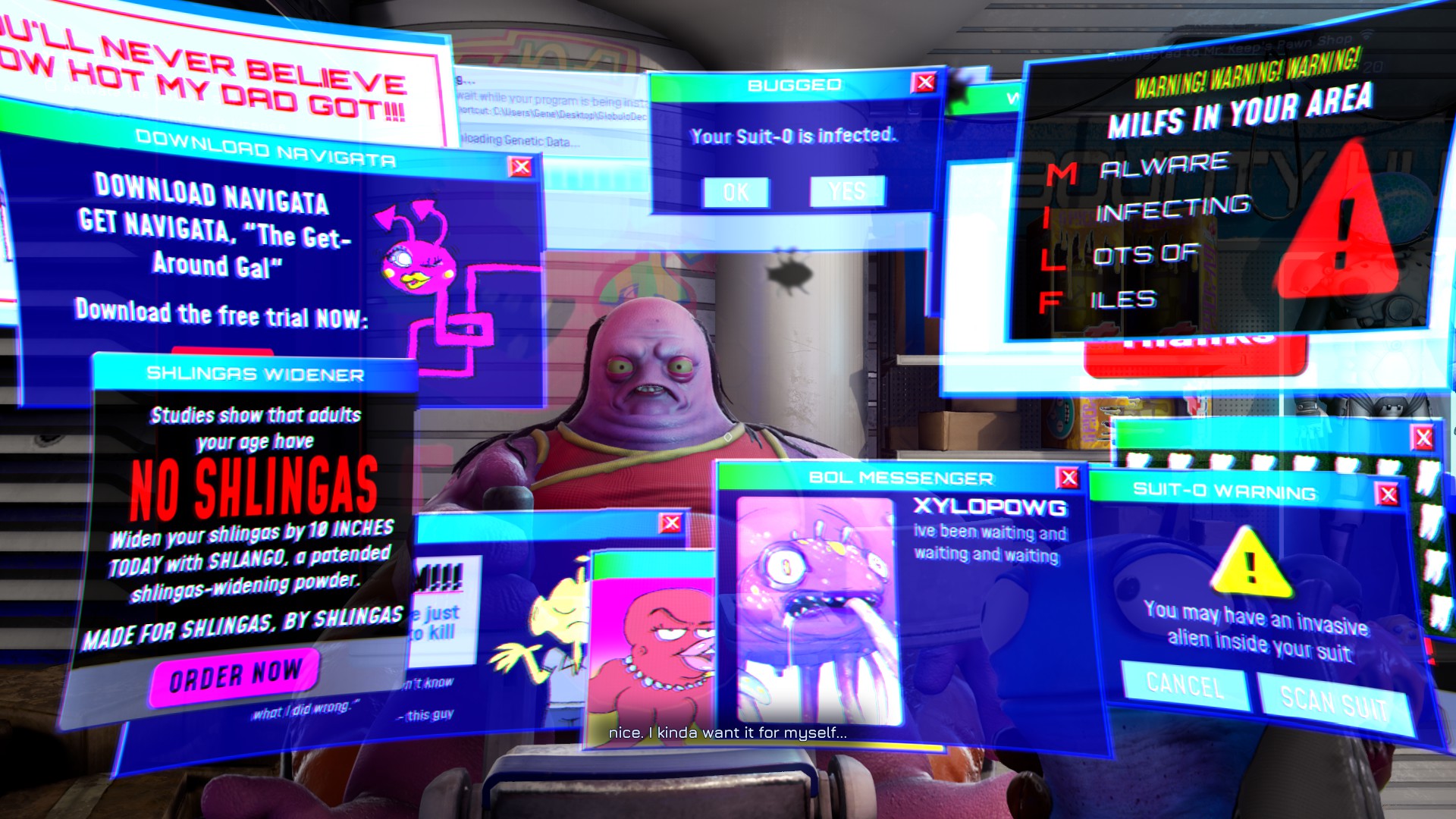 Squanch Games’ co-founder and CEO Justin Roiland is known for a certain type of humor that can range from simple crass joking to playing off the worlds and franchises that have dominated pop culture. This usually plays pretty well in his different animations like Rick and Morty and Solar Opposites, but creating good humor in a game usually requires something else entirely: timing.

In Squanch Games’ previous title, Trover Saves the Universe, it was clear the developer was still trying to decide what it wanted to do. The game was part VR experience, part platformer, and it took place in something that looked like a Roiland animation that players could interact with. There were a lot of jokes and systems that seem to be earlier evolutions of what Squanch Games is trying in High on Life.

Everything from a visual to narrative standpoint is evolved, truly showing what Squanch Games can do with the right funding. While it does seem to rely on some older jokes from previous games at times, it doesn’t keep the game from being a good time at all.

Realistic characters that support this narrative

High on Life feels like a clear evolution to what a Squanch Games production can be. There are highs and lows throughout the game to be sure, but it’s a 12+ hour adventure that will keep players entertained and may even produce a fair amount of chuckles.

The story feels like the typical start, with aliens severely changing the life of an otherwise random human burnout. The main character is a clear player-insert, forever keeping his mouth shut so that his talkative guns, the Gatlians, can give all the dialogue throughout the game.

These are the clear stars of the game, featuring familiar voices like J.B. Smoove, Betsy Sodaro, Tim Robinson, and Justin Roiland, of course. There’s also an extensive cast of voice actors from many popular animated projects as well as crossovers from the actors in Rick and Morty and Solar Opposites.

The performance of each of these guns is great, providing unique dialogue and personality through different parts of the game, with players able to switch up and hear their perspectives at any time. Leading up to the game’s release, many players were commenting on how they thought the guns might be annoying, but this isn’t a problem.

Before the game was released, it was unclear how previous Roiland animations and characters would look alongside these hyper-realistic versions of humans. It seems like Squanch Games is largely moving away from the Roiland-esque animation style, however, matching less cartoonish aliens alongside these actual human characters.

This is a huge positive and one that makes the world feel more real. It gives the game a sort of credibility that the incessant jokes would otherwise diminish.

What players should instead look out for is a number of mind-numbingly annoying characters that present themselves in a way that only Roiland could’ve accomplished. Without spoiling anything, there are two instances in the game (one previously shown in trailers) that made the game an actual headache due to the sheer amount of endless, high-pitched chatter. In both of these instances, the annoyance was intended, but it wasn’t in a fun way.

These are by far the lowest moments in a game that manages to be a really exciting arcade shooter that makes players feel more powerful as they progress the game. While Trover felt like it was largely banking on its jokes, High on Life provides plenty of funny gags while also being an enjoyable FPS game with good mobility.

That being said, there is a level in the second half of the game that was more nauseating than almost anything in recent gaming history, including the worst VR titles. In this fight, players will go through a certain visual effect that somehow makes High on Life feel like a drug in itself—only one that provides the worst headache and none of the euphoria.

This is on top of when the game had some kind of screen tearing effects where colors would blend together as you turned the screen. This issue has seemingly been resolved since our playthrough, whether it be through adjusting the graphics settings and turning off motion blur or from the patch that Squanch Games put out shortly after releasing the game for review. The issue was caught on PC and may not be there on Xbox.

There was also the occasional issue where enemies would glitch through a melee execution or sometimes freeze in place. There was also an issue where melee executing an enemy would send you flying high into the air before allowing you to come back down. There are no real game-breaking bugs in the game, though.

A world with more content and choices than Skyrim

The gameplay is pretty standard once players get through the intro and become familiar with a certain alien bounty hunter. After this, players will go to a variety of different alien worlds to hunt down different members of the G3 Cartel, returning to their home after each kill to turn in the bounty and prepare their gear for the next journey.

The game gets progressively harder and each new boss fight genuinely feels like a unique experience with an interesting twist. There were almost no moments throughout the run of High on Life where it feels like you’re being forced to do the same thing over and over again. The argument could be made that returning to the house is a bit much, especially with lengthy story scenes, but these serve as good breaks in between the murdering.

While each fight can be challenging in unique ways, you should be able to keep up with the game as long you maintain your upgrades. There were still one or two boss fights that proved uniquely difficult, but they are easily beatable as long as you change up your strategy and try different guns.

Like previous Squanch Games titles, players are given plenty of opportunities to interact with the world and the characters in it. There are sidequests and moral choices that don’t seem to affect much, but they usually have another joke or gag that’s worth a chuckle or two.

Something else worth noting is that there are a number of real-world movies inside the game, shown at various points throughout the story. If they choose to, players can sit down and watch an entire classic B-movie or two before moving on to the rest of the game. This sudden realization paired with other real-world references and ads in the game is just a really good gag, even if it does make the game a huge download for its size.

This is in addition to the previously reported animated content in the game that Justin Roiland has become famous for. It feels very much like the “Interdimensional Cable” episodes from Rick and Morty, only with a lot more content than what was shown in those episodes. It’s easy to miss this, however, since the episodes are usually shown in Blim City while you’re running around doing other things.

Microsoft chose to buy this game, and that’s awesome

Something that definitely deserves its own recognition is that Microsoft chose to buy this game, and after playing all the way through, you have to wonder how much of this game it saw first. It wasn’t a bad decision at all, because the game provides over a dozen hours of fun and it will make a great addition to the Game Pass, but it is curious.

There are a number of jokes and sight gags throughout the game that make you wonder. One of the more extreme examples includes a booth in one of the areas in the middle of the game where the character is selling a sexual device that’s only more recently entered the mainstream, apparently having to be blurred to some extent.

There are jokes about Jesus Christ, which aren’t as risky as they used to be, but still verge into territory that will get some letters written. In many ways, High on Life is the exact game you wanted to play as a kid but you know your parents would have a conniption if they walked in on you playing it. Hearing one line from this game is enough to send a Christian mother to Intensive Care.

Microsoft seems to be very liberal with the games it allows on Game Pass, seemingly further proving its want to draw a wide audience of players. Throughout the game, the idea that Xbox partly owns this game, at least temporarily, is a thought that made each risky joke that much funnier.

In past Justin Roiland game projects, it’s felt as if the humor has been held back compared to his internet works, but not in High on Life. Where Squanch Games has been forced to hide behind innuendo in the past, this game just states everything it has to say with unabashed confidence.

The fact that this hasn’t harmed the game’s reach and it’s instead being offered to a much wider audience at no additional charge is genuinely intriguing and speaks to how well Microsoft thinks it could do.

Overall, Squanch Games has really shown its capabilities with High on Life, managing to create a fun arcade shooter that feels basic enough to enjoy with moments that are genuinely challenging. Like all comedy, some of the jokes are hit-and-miss, but the jokes it does nail are good for a couple of chuckles, at least.

Whether it be DLC or onto the next project after a well-deserved rest, it’ll be interesting to see how Squanch Games continues to improve on each subsequent experience.