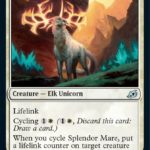 Cycling has returned to Magic: The Gathering and it’s having an impact on the Ikoria: Lair of Behemoths (IKO) Standard and Limited meta.

Cycling was first featured in Magic via Urza’s Saga. It’s an activated mana ability at Instant speed via a mana cost that allows the player to discard the creature with Cycling to draw a card from the library. But not all Cycling costs are the same. And within IKO, there are 47 total cards with Cycling or an ability that’s triggered when a card is Cycled.

Attempting to take over the IKO Standard/Limited meta are creatures like Shark Typhoon and Enchantments such as Reptilian Reflection. Shark Typhoon produces a flying token with “X/X” power and defense, where “X” equals the mana paid to activate the Cycling cost. And Reptilian Reflection becomes a 5/4 with Trample until the end of turn anytime its controller Cycles a card.

But there’s also a whole group of Cycling cards that might be getting overlooked. Counter Cyclers are five IKO Uncommon creatures that have Cycling, a static evergreen keyword, and an ability to place a keyword Counter on another creature when cycled.

Counter Cyclers aren’t as powerful as either Shark Typhoon or Reptilian Reflection, but they are solid cards to consider including within Cycling builds. There is one Counter Cycler within each Magic color.

Players can enjoy creating a variety of Cycling decks across multiple archetypes via IKO in MTG Arena and MTGO. Booster sales for Ikoria are scheduled to release on May 15.