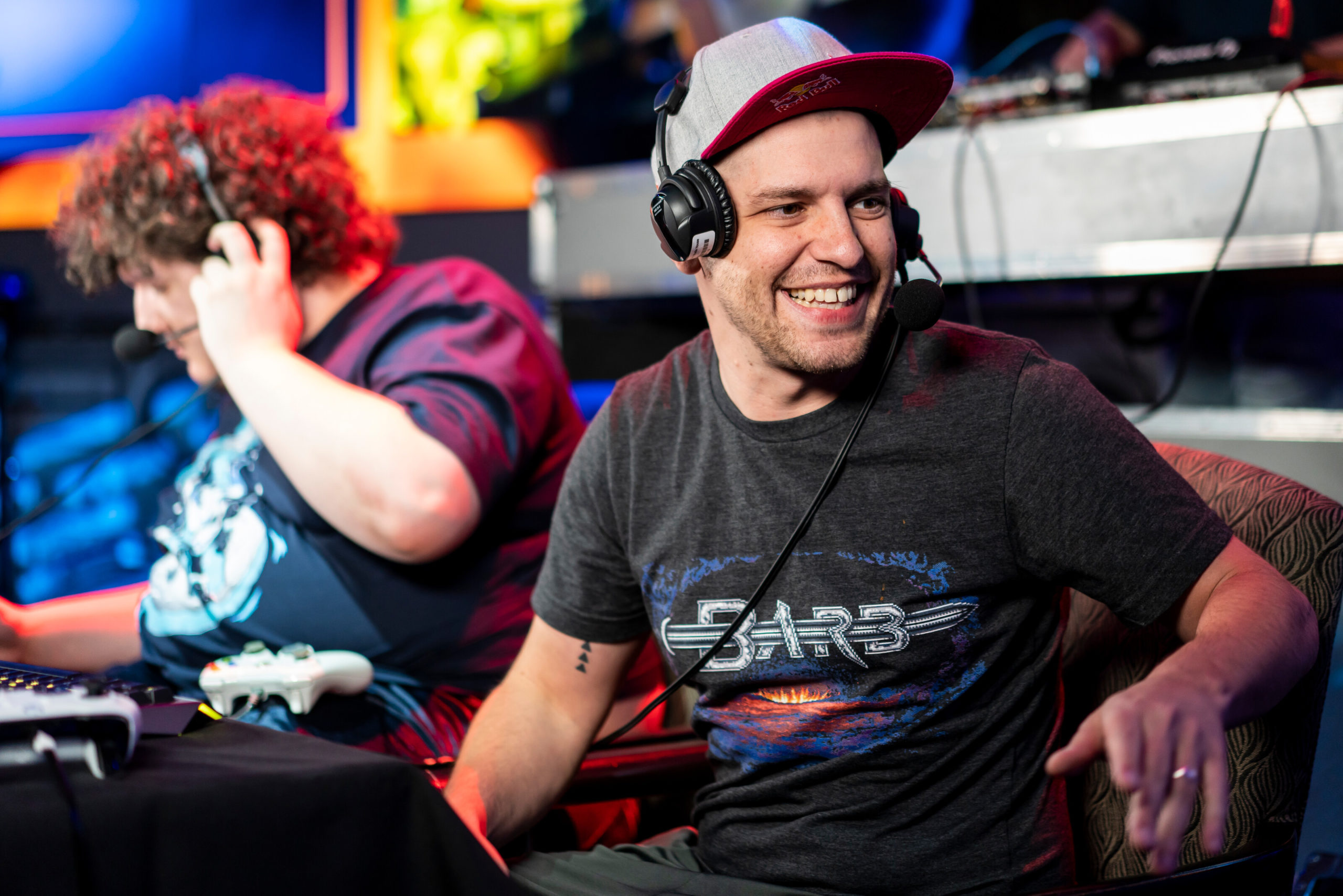 David “GrandPooBear” Hunt is a content creator who’s best known for his speedruns and Mario related content. But recently, his most popular content has come from playing Fall Guys: Ultimate Knockout.

The massively popular battle royale game that burst onto the scene in August is still one of the top 20 games on Twitch and GrandPooBear is one of several streamers who takes Fall Guys to another level by hosting a winner-takes-all event called FallMania, in partnership with Red Bull. The bi-weekly tournament features streamers both big and small all fighting through the horde of random players to try to claim a $5,000 grand prize by grabbing the most crowns.

FallMania has become one of the most popular Fall Guys events on Twitch, pulling in more than 100,000 viewers in its first three entries, according to TwitchMetrics. And before the first FallMania featured in Fall Guys season two begins, GrandPooBear talked with Dot Esports about cultivating trust with his Twitch viewers, the necessity of games like Fall Guys, and why it works so well as a competitive title.

What made Fall Guys such an interesting game to you? Was it the instant popularity on Twitch and the content potential or was it something more along the lines of how it played itself perfectly into being a competition-like gameshow?

GrandPooBear: I had a friend, Wavy, who was actually in the alpha, the one where you couldn’t stream it. We have a big Discord server with all of the people who kind of got their start in Mario and Mario Maker, the people who that’s where our popularity kind of grew. That is the place where we get together to play Among Us, gather games, and share strats or community tips—where we just hang out as friends out of the public eye, so to speak.

So Wavy told me that I was going to love the game before it came out. So when the beta was rolling around and I had seen more material coming from the game, I was interested because A. it looked like it would be fun to play with my friends and B. I thought I might be pretty decent at it. Because all of the running and jumping parts of video games, I have that stuff down pat. It’s the ones where I have to aim a gun and go pew pew, that’s when I’m really bad.

I’m also huge into battle royales anyway. You know, even as a speedrunner, it’s no secret that I love PUBG, Fortnite, I dabbled in Apex Legends a lot and love Tetris 99. I just love any game where you take a lot of people, put them in one spot, and have one winner.

Once I got into the beta, one round was all it took and I was like “yep, I’m hooked.”

Was there a reason you gravitated toward the game that quickly outside of gameplay itself or was that the main thing that sold you on it?

There are definitely different kinds of gamers out there and I tend to gravitate toward mostly 2D platformers, but I still love 3D platformers too. So I think Fall Guys really just scratches and hits the sweet spot of battle royales, but I’ve never had one where it hits my platform itch all in one area.

It is something that is super nice and refreshing and I hope that we see… not that I don’t love Mediatonic, I wish them all the success, but I want some knockoffs. I wanna see what all those other developers have and can add to the formula.

You’re best known for being a speedrunner, but your Twitch is pretty consistent in terms of viewership no matter what you play. How have you worked to cultivate that community so you can pretty much play whatever you want and still pull in those numbers?

I am super lucky and very unique in that aspect where I am at a point now with my Twitch where I can do whatever the heck I want and people will show up. There is a certain level of trust that I have built up with my community at this point now and they know that I am going to deliver a journey. And if they are going to invest their time on this journey, they are going to come out of it with worthwhile moments.

Even with something like Spelunky 2 right now, which has been the journey we have been on this last month, it is such an incredibly difficult game and the original is one of my top five games of all-time, so coming out and hitting us with puzzles, secrets, the hard platforming, hilarious deaths, all these things that chat knows are going to entertain when I bring it to them.

Chat knows I am going to work hard at any game I bring them and if there is a goal to be obtained, I won’t stop until I do it. I think that trust with my community is extremely important to the success I am currently having.

It also helps that there is this other thing, which you kind of saw with TimTheTatman and Fall Guys, where there is something about seeing gamers who you know are really great, fail. I want to be very humble about this and say that I think there are a million Mario players better than me, but I’m a pretty great Mario player, so I think there is something about great players being bad at something and then becoming great again that is fun for viewers.

I mean Tim’s Fall Guys fails were the most viral thing we had on Twitch this year and its because he is so great at other games but he fucking sucks at one easy one. It just made great content, to see him go on that journey of suck to less suck. That is a great example of it on such a big scale and I think it really works for me on my own not quite so large, but still fine scale.

In actuality, Fall Guys has been the main game on your channel for a good bit now. How does a game like that compare to the usual Mario speedruns, Mario Maker challenges, and your more recent Spelunky 2 streams?

Fall Guys is very fun in that, you always feel accomplished when you win but when I lose, I always feel like it is because of random BS. I can always blame something else besides myself, which is great. I love that. I really think that is part of why it works so well as a casual game, because everyone can say it’s their teammate’s fault, or that it was because of some BS ragdoll.

It is also a fantastic game to play with friends because you get to play with them and against them at the same time. It creates these rivalries between streamers and creates good content. But more than that, it creates relationships, which we are all kind of yearning for right now as we approach nine months now of COVID. It gives us this sense of camaraderie and makes us feel like we are in the same room again. It is very reminiscent of couch gaming and has a very Mario Party vibe when you play it.

Do you think games like Fall Guys are important to splice in among the titles like The Last of Us Part II and other, bigger titles to provide a breath of fresh air, especially in a year like 2020?

I actually loved The Last of Us Part II because I really love media that doesn’t give me what I want. I really love stories that don’t give me what I want even when I want there to be a happy ending. But in terms of Fall Guys, it provides something great in a time where games that aren’t story-driven all seem to try and be an esport. And I think it shows that you don’t need to take yourself super seriously to be successful.

One thing Fall Guys is doing super well with everything from their Twitter to costumes and new games, they really aren’t taking themselves or the game too seriously. That’s a really good thing and something that we need to remember. I actually think Fortnite was this way at the start, and through no fault of the devs, it became super serious because it became so popular.

Fall Guys has done a good job staying less serious, even in things like FallMania, which is a very serious competition where one winner gets $5,000, it is still very much how we present it as a little silly and over the top. I call it pre-wrestling it out, where we create storylines as the tournament goes on as we have the crowd rooting for a good guy and booing a bad guy. They spam emotes for these people and create these made up rivalries that announcers throw together because the players aren’t talking to each other while they play.

It just shows that not everything needs to be this hyper-competitive, super-serious event to work. There is room for everyone and every type of game right now.

This is the fourth FallMania event, with the previous three bringing in upward of 100,000 unique viewers across your streams. How have you changed things for this iteration heading into season two of Fall Guys?

Part of the game is you kind of have to roll with whatever happens. What we have seen in every single FallMania is that it can always come down to the absolute, final game. Comebacks aren’t just possible, they are likely. No lead is safe and great players can lose on easy rounds. Sometimes even the crowd can get involved at times and there is nothing we can do to stop that with how the game is set up.

That makes for this event that is not comparable to something like a StarCraft II tournament because the game isn’t always even and anything can happen at any point. You are going to see that really high skill level play going against 56 other players that are complete wildcards.

Season two is also bringing in some new changes, like four new stages where anything can happen, changes to stuff like the colors in Hex-A-Gone to make it harder for players to react. It is really going to come down to which players put in the work before the event, but the random element is still going to be there.

I mean we had two players advance in FallMania 3 because they tied on Fall Mountain and got a double crown. And we count that and want to use stuff like that to hype up the event as best we can.

How would you sell someone on tuning into FallMania if they didn’t know what Fall Guys was?

Yo, FallMania is the best damn event in esports entertainment today. You are guaranteed to see spills, falls, controllers thrown, and surprises happen. Anything can go down in FallMania, $5,000 goes to one single player, while 15 other players go home and get nothing.

Check it out. The fiercest, most intense, non-serious competition you will ever see. FallMania 4 All-Stars happening Oct. 14, 4pm [PT] on twitch.tv/GrandPooBear.