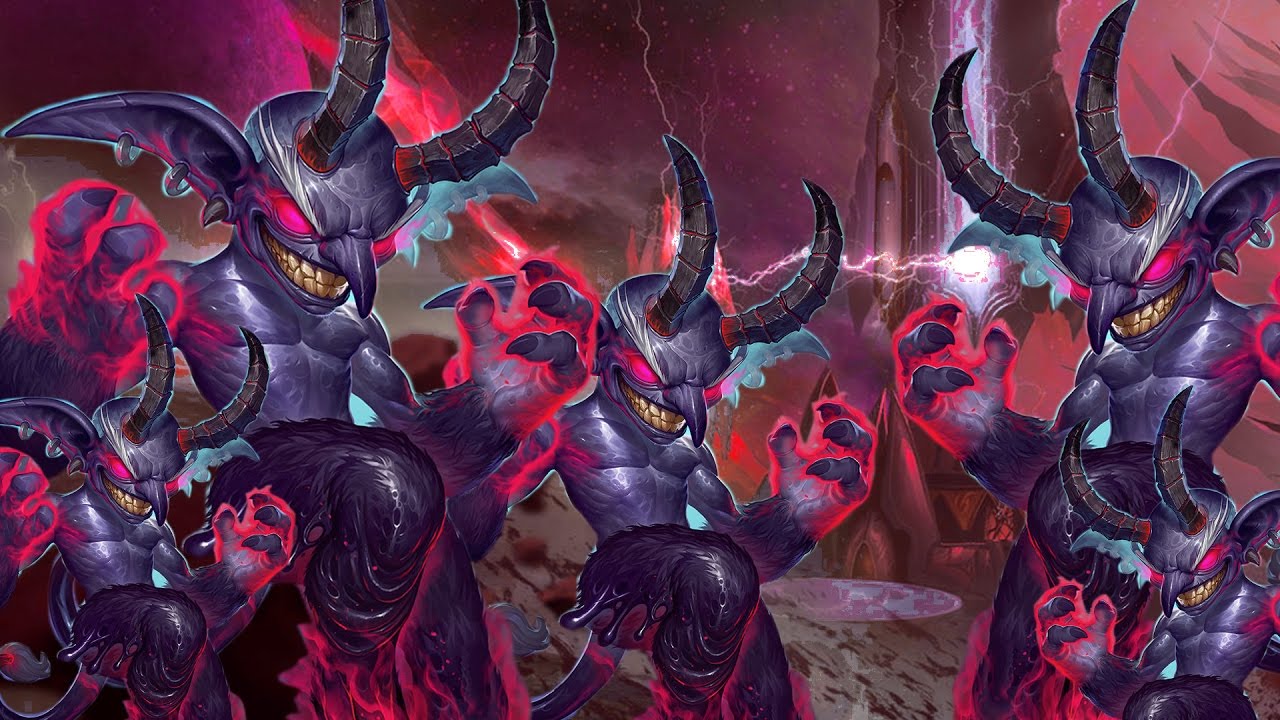 If you love demons, devils, fire, and Hearthstone, then you’re probably familiar with the Warlock class.

The Warlock class fantasy born from World of Warcraft is one of the best representations of the archetype. Blizzard has consistently done a beautiful job of transferring that class fantasy to Hearthstone.

While Warlock may not have one of the best decks every expansion, when you play the class, you feel like you’re using cards that an actual Warlock would use. Warlocks intend to destroy their opponents with an army of Demons accompanied by waves of Hellfire. Here are a few Warlock decks that are doing well on ladder.

Cube Warlock is a deck archetype that gained zero support from the new expansion—but it continues to do work on ladder regardless. While this is one of the more difficult Warlock decks to pilot, it can be devastating in the right hands. The deck revolves around a few different cards, with the most important being Carnivorous Cube.

The Cube is a five-cost minion with four Attack and six Health that has a Battlecry and Deathrattle that are essential to this deck’s win condition. The Battlecry says to destroy a friendly minion, and the Deathrattle lets you summon two copies of the minion you destroyed. The deck is full of demons like Voidlord and Doomguard that allow you to pull off insane combos when using the Cube.

Voidlord is a nine-cost minion with three Attack and nine Health that has Taunt, plus a Deathrattle that lets you summon three 1/3 Demons with Taunt. Imagine destroying a Voidlord with your Cube, then triggering your Cube’s Deathrattle. This play would result in you having two Voidlords, as well as three smaller Taunt Demons.

You can also use the Cube on a Doomguard and then trigger its Deathrattle to get two free Doomguards without having to discard anything from your hand. The deck also runs Skull of Man’ari to make it easier to cheat out your Demons (play them without their mana cost).

If you enjoy engaging control style decks with tons of options for clever outplay, consider giving Cube Warlock a try.

Another deck that remains widely unchanged since the expansion dropped is Even Warlock. Even though the most successful versions of the deck haven’t been running any new cards, it continues to dominate ladder at all ranks.

Thanks to it’s souped-up hero power from Genn Greymane, Even Warlock has insanely-good card draw. For this reason, one of the core moves of the deck is to mulligan for Mountain Giant and then drop an 8/8 minion early in the game thanks to your big hand size. Mountain Giant is usually a 12-cost minion, but it costs one less for each card in your hand.

Plays like this give the game huge tempo swings early on. The deck is also stacked with cards like Hellfire, Defile, and Spellstone, so you’ll have no shortage of board clear.

Even Warlock focuses on eliminating your opponent’s threats while amassing your own board to demolish them. Its win conditions revolve around cards like Bonemare, which can be used to greatly buff a minion’s attack for that final swing at your opponent’s health.

The deck also runs Gul’dan, which is a fantastic tempo swing late in the game. Once your Demon army has been demolished, you raise them again with Gul’dan and hopefully finish off your opponent from there.

Even Warlock is great for anyone who enjoys an aggro deck with a few control elements tossed in.

Control Warlock is similar to Cube Lock, but plays a bit more like a traditional control deck. Instead of running the Cube package, you’ll use more control-based cards like Twisting Nether and Mind Control Tech.

Control Lock still runs Bloodreaver Gul’dan and a horde of Demons, so your end game will be similar to Cube Lock. You’ll want to drop Gul’dan and resurrect as many of your previously-played Demons as possible. The deck also includes a number of non-Demon minions that serve a specific purpose within the Control archetype.

Doomsayer and Mind Control Tech both provide ways to get rid of your opponent’s minions. Siphon Soul is in the deck to provide additional removal while also healing you. A key to playing this deck (and many control decks right now) is getting proper value out of your Stonehill Defender.

Stonehill Defender is a three-cost Taunt minion that allows you to discover another Taunt minion. You’ll want to make sure you try to get something that helps you swing the tempo in your favor for your specific matchup. Anytime you see a card like Lich King or Zilliax pop up as a discoverable minion from Stonehill, that’s usually a go-to option thanks to the value they provide.

Control Lock is a great option for Warlock players who want a slower, more traditional playstyle.