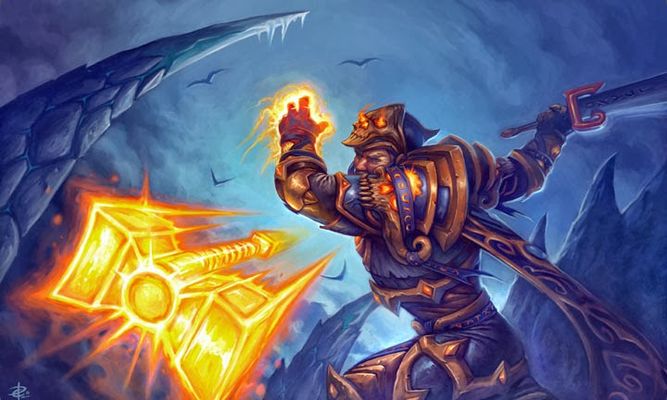 Paladin has consistently been one of the strongest classes in Hearthstone. If you’re a Paladin player jumping into Rastakhan’s Rumble, fear not—the light is still burning bright.

Paladin as a class has always aimed to fulfill the fantasy of a light-wielding warrior who’s a force to be reckoned with. With the Paladin class in Hearthstone, that’s exactly what you get.

Decks like Odd and Even Paladin dominated ladder over the past year. While these decks didn’t receive a ton of support in Rastakhan’s Rumble, they were already so dominant that they didn’t need it. Instead, the expansion brought support to some older, less-popular Paladin archetypes, like Exodia and Control Pally. One of the main cards that brings support to these decks is Shirvallah, the Tiger.

Shirvallah has Divine Shield, Lifesteal, Rush and costs one less for each mana you’ve spent on spells so far in the match. With a base mana cost of 25, you can see how Shirvallah would be impossible to play in a deck without plenty of spells. Shirvallah is a great boost in survivability for Control Paladin decks, and you can expect to see more archetypes surface that are built around the card.

Exodia Paladin was an incredibly fun deck to play, but lacked some essential tools to make it competitive. Rastakhan’s Rumble brings those tools in the form of cards like Time Out and Shirvallah. Time Out is a three-cost spell that makes your hero immune until your next turn.

The main area where Exodia Paladin struggled before Rastakhan was in its survivability. The deck aims to play Uther of the Ebonblade and then use the hero power he gives you to summon one of four unique horsemen: Deathlord Nazgrim, Darion Mograine, Inquisitor Whitemane, and Thoras Trollbane. Once you have all four horsemen on the battlefield at once, you win the game.

Cards like Time Out and Shirvallah help you stay alive while you attempt to flood the board with your apocalypse-ushering horsemen. The deck also includes a plethora of other board clear spells, like Equality and Consecration, that will help hold off your opponent and prepare for Shirvallah.

You’ll also be using cards like Ancient Brewmaster to send your horsemen back to your hand. This gives you a better chance of getting all four unique horsemen on the board, since you can hoard them in your hand where they’re safe from removal.

This is a great option for anyone who enjoys an engaging control deck.

This archetype has dominated Hearthstone competitive basically all year. When famed Hearthstone legend Octavian “Kripparrian” Morosan put out his series of videos making predictions about Rastakhan’s Rumble, he said he expected Odd Paladin to remain at the top of the tier list. If you’ve played any ladder in the past few weeks, you know Kripp was correct.

Odd Paladin seems to be a deck that has too many answers that it can generate way too fast. Using the buffed-up hero power it gets from Baku the Mooneater, Odd Paladin has no issue filling the board with recruits. Plus, you get to run one-cost spells like Lost in the Jungle, which provides you with even more recruits.

The main win condition with Odd Paladin previously revolved around getting as many recruits on the board as possible and buffing them with Level Up. After the recent card changes, however, Level Up is now a six-cost card and can’t be included in Odd Paladin. Expect to see more rush down cards, like Leeroy Jenkins, take over as the win condition for this deck.

Odd Paladin is reasonably cheap and the deck basically plays itself. While the recent nerf to the deck through changing Level Up will no doubt affect its win rate, expect to still see Odd Paladin decks climbing up the ladder.

Note: The list below still includes Level Up, since it was the top list before the nerf. Many Paladin players are replacing Level Up with Frostwolf Warlord.

Even Paladin is similar to its Odd Paladin brother, but has a more value-based playstyle. Like Odd Paladin, Even Paladin receives a buffed-up hero power thanks to Genn Greymane, but since the deck can only contain even cards it takes a slower approach.

Not having one-cost cards means it will take a bit longer for Even Paladin to establish board presence. For this reason, Even Paladin includes more value-based cards like The Lich King, Tirion Fordring, and the Glass Knight.

Even Paladin also has the luxury of running board clear cards like Consecration that make it a formidable matchup for its odd counterpart. The deck plays almost like a Control Paladin deck, but with a heavy focus on dealing damage to your opponent by buffing your minions.

Many of your games will be won using cards like Blessing of Kings, which gives a target minion plus four Attack and Health. Since you’re running things like Windfury Harpy and Corpsetaker, you’ll want to save your Blessings for them. These cards have Windfury, which allows them to attack twice, so you’ll want to buff these bad boys up and then drop so much damage on your opponent’s face that they can’t answer your next turn.

If you’re someone seeking a middle ground between the Rush and Control playstyles, Even Paladin would make a great choice.