Welcome to my analysis of the Whispers of the Old Gods expansionfor Hearthstone.  I continue my parade through the cards withthe neutral minion Ancient Harbinger.  My critique will focuson the competitive viability of the card by looking at its rawstats and effect.  I will also be looking at potential cardsand decks that Ancient Harbinger would fit with.  Let’s take alook: 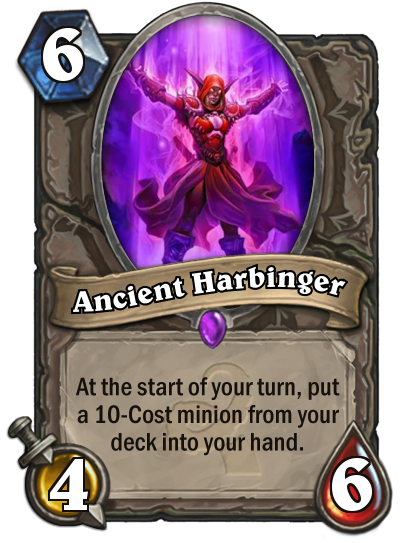 Combat wise this card has as much survivability as Reno Jacksonfor the same cost.  Players can sometimes see Reno Jacksonlive for another turn, or he can also be dealt with swiftly. I’m specifically noting the survivability because AncientHarbinger must survive the following turn to get maximum value. The 4 attack is pretty negligible and not incredibly strong. Ancient Harbinger could be more or less annoying depending onthe opponent’s hand and board.

Let’s move on to her effect.  No impact on the board atall, but more of an insurance policy for that sweet 10 mana costminion.  This can be great for when players are in the lategame and need a powerful minion to hit their board.  There aresome overtly obvious downsides for this effect.  AncientHarbinger’s effect only activates at the start of a player’s turn,which gives the opponent an opportunity to stop the effect fromtriggering.  If players already draw or play that 10 manaminion, then this card loses its value and becomes a vanilla 4attack 6 health minion for 6 mana.  There are a lot ofsituations that make this card useless and generate a net loss intempo.  Ancient Harbinger isn’t necessarily risky, but therewill be moments where players will think “Gee x card couldbe more useful here”.

Some cards that obviously go well with this new card are thelegendary Old God cards.  Ancient Harbinger can guarantee thatplayers get C’Thun or Yogg-Saron.  Druids could cheat theminion out early and avoid instant removal.  A deck thatrecently garnered traction on ranked ladder is Tempo Warrior. This deck uses Varian Wrynn to hopefully pull out strongminions from the Warrior’s deck immediately onto the board.  Acopy of Ancient Harbinger can make a decent option for TempoWarrior to use Varian Wrynn more frequently.

Overall I’ll give Ancient Harbinger a skeptical and slight passin viability.  I can only recommend using one copy of the cardbecause historically players only put one 10 mana cost minion intheir decks (all the good ones are legendary anyway).  There’sa lot players still don’t know about the new expansion and Blizzardmight just release more useful cards.  I also don’t thinkwe’ll see this card in every deck that has a 10 cost minion becausecertain card archtypes (like Dragon) need more of the archtype tosucceed.  Ancient Harbinger will only be useful in decks thatcan afford to play this card.  I’m looking forward to testingthis card out when Whispers of the Old Gods is released nextweek.