With the release of Commander Legends: Battle for Baldur’s Gate, Magic: The Gathering is introducing a new kind of Enchantment to help balance the new set’s Limited format.

For the first time in Commander, spells other than a legendary Creature can be in the command zone. Background Enchantments work similarly to Partner. They can be used with mono-colored legendary Creatures that allow you to choose a background.

This is a way to introduce deckbuilding variety to Battle for Baldur’s Gate Limited, and prevent players from being stuck with mono-colored decks during the drafting process. The color identity rule in Commander means you can’t run any cards that aren’t the same color as your Commander.

Outside of the five colors, there is one colorless Background called Faceless One. This card isn’t intended to be drafted often like The Prismatic Piper from the original Commander Legends in 2020. Faceless One exists as a failsafe that gives players a Common Background that gives a second color.

Backgrounds can be found as Common, Uncommon, and Rare cards. They can still be used in the deck like a normal card.

Here are all of the Background Enchantments by color. 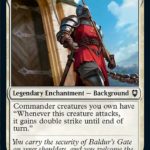 The White Enchantments mostly help with combat. Each one either buffs a Creature or gives you an extra bonus for attacking. Far Traveler doesn’t explicitly have anything to do with combat, but the easiest way to tap your Commander in Battle for Baldur’s Gate Limited will be to attack with it. 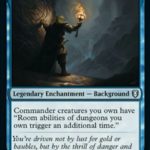 Blue Backgrounds have a diverse set of different abilities. Dungeon Delver is solid in a U/B shell that wants to take the initiative. Feywild Visitor and Sword Coast Sailor reward you for attacking. Shameless Charlatan is the most flexible of these options. Being able to have your Commander become a copy of any Creature has the potential to be the best or worst ability on the battlefield at any given time. It’s heavily reliant on what you’re able to copy. 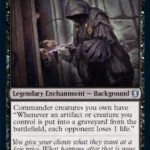 Black has a suite of fairly aggressive Backgrounds. Three of them buff an attacking Creature. The best of these options is Cultist of the Absolute. This card gives a Creature evasion, a stat boost, and protection with the downside of having to sacrifice a Creature on your upkeep.

Scion of Halaster is a nice Common Background that gives you card selection and fills the graveyard. Agent of the Iron Throne is good in sacrifice decks. 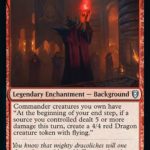 Goad is a major mechanic in Battle for Baldur’s Gate, and the Rare Red Background takes advantage of forcing combat. When one or more Creatures deal combat damage to a player, you goad one of their Creatures. This is a solid way to get goad going. It shouldn’t be a primary option, but is a good secondary one.

The other three work well with the main Red archetypes. Dragon Cultist works with R/G. B/R will use Street Urchin as a repeatable way to sacrifice. Guild Artisan is also a good option for B/R because of its treasure generation. 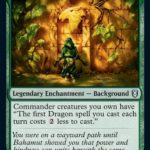 Acolyte of Bahamut fits into both G/R and G/U Dragon decks. The cost reduction is important for a tribe that specializes in expensive Creatures. Cloakwood Hermit is a solid option for go-wide lists in Limited. Master Chef is another good option for go-wide decks. They help turn an army of 1/1s into a formidable force powered up by +1/+1 counters.

The Rare option is Raised by Giants. The six-mana Enchantment is a little overcosted, but giving a Commander base stats of 10/10 can be a good way to win through commander damage.