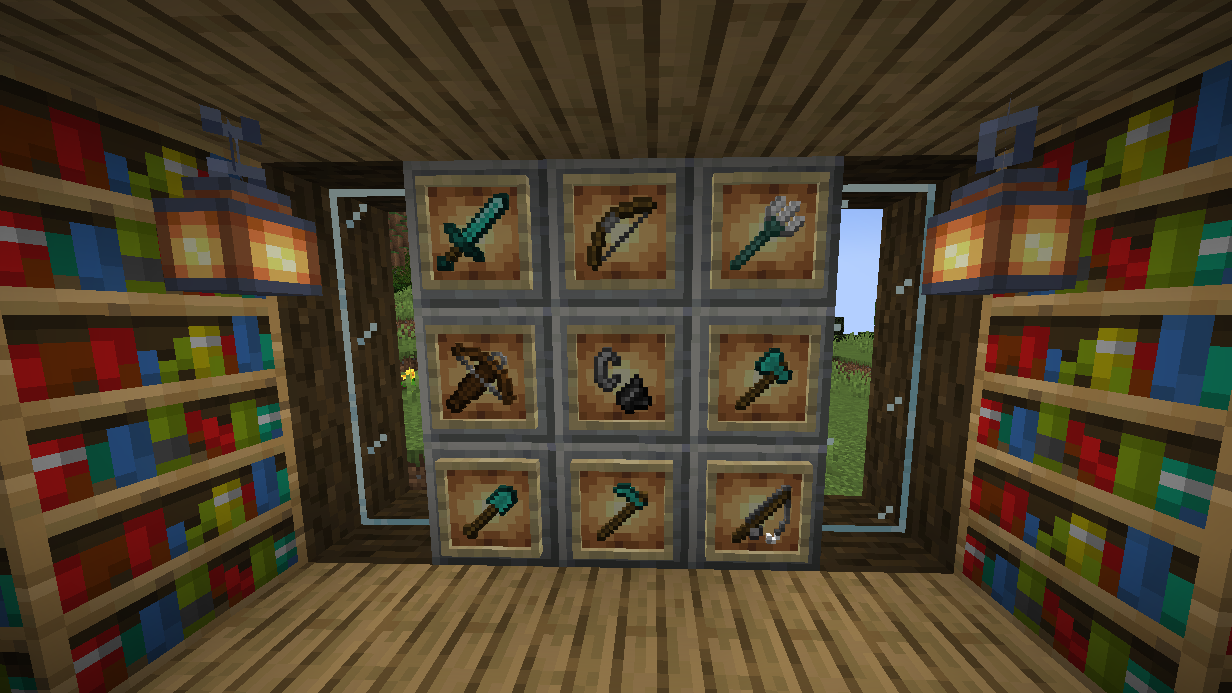 There are lots of useful tools and weapons in Minecraft, and knowing the best ways to enchant them to maximize their potential can be overwhelming, especially with so many options available.

Many enchantments can be used on both tools and weapons. Here’s a list of all the best enchantments and which ones can be applied to every tool and weapon.

These enchantments are very useful and can be applied to all tools and weapons.

This enchantment helps combat durability by making it so the item being used might not lose any durability upon each use. It makes all tools and weapons last much longer.

Mending uses experience to restore the durability of the item being used. It makes it so activities that drop experience, like killing mobs or mining, will repair your tools and weapons in the process.

These enchantments can be applied to the most important tools—Axes, Pickaxes, Shovels, and Hoes—to maximize their abilities and usefulness.

This enchantment increases the speed that tools mine all blocks at.

This option increases the drop of certain mined items. It’s incredibly useful when mining ores, especially rare ones like diamonds.

This enchantment allows players to mine and obtain otherwise unobtainable blocks. Some examples are Ender Chests, Bee Nests, and Glass. Silk Touch conflicts with Fortune and only one can be applied per tool.

In addition to the two enchantments that can be applied to everything, Fishing Rods have two helpful enchantments specific to them.

This option makes fishing faster by decreasing the wait time by five seconds per enchantment level for a bite.

This enchantment makes players luckier while fishing by approximately two percent per enchantment level. This means the higher the level, the better the chance of obtaining rare loot while fishing.

Weapons are more complex than tools because they all have their own specific enchantments along with the general ones they all share.

Swords have a lot of helpful enchantments available only for them. Luckily, all of the best ones don’t conflict.

This option increases the damage dealt with each hit.

This one sets any target hit by it on fire and deals continuous fire damage.

This enchantment knocks away mobs that are hit by the player.

This option increases sweep attack damage against mobs and makes hitting more mobs at once easier and quicker.

Bows allow players to attack from afar and up high. They also have many unique enchantments that make them a useful and versatile weapon.

This one allows players to have infinite arrows as long as they have a singular arrow in their inventory. This enchantment conflicts with Mending but is usually more useful than Mending for Bows.

Flame shoots flaming arrows that instantly set the target on fire. This deals repeated fire damage to the target, making them easier to kill.

This is the Bow version of Knockback and pushes targets away in the same way.

This option increases the amount of damage dealt by each shot.

Tridents are unique weapons because they can deal both direct damage as well as damage from a distance. The best enchantments for a Trident depend on how you want to use it, but here are the options.

This enchantment increases damage against underwater mobs. It’s similar to the Sharpness enchantment for swords.

Riptide allows players to fly through the sky as long as they start in a body of water. It’s one of the fastest ways to travel in Minecraft. Riptide conflicts with both Loyalty and Channeling, so you can only choose this and Impaling if this is your choice.

This enchantment returns the Trident back to players after they have thrown it and it has hit the entity or block it was aimed at. It conflicts with Riptide.

Channeling causes lightning to strike enemies hit by the Trident when used during a thunderstorm. Because this enchantment is specific to thunderstorms and conflicts with the Riptide enchantment, it’s usually the last enchantment players should choose.

Crossbows deal heavy damage to make up for their long reload time and the enchantments available exclusively to them make them an even better weapon to have on hand.

Multishot allows crossbows to shoot three arrows per shot while only consuming one arrow.

This enchantment increases the reload speed of crossbows. Its loading speed increases by 0.25 seconds per level.

Crossbow arrows can go through multiple targets and other players’ shields with this enchantment. Since this enchantment conflicts with Multishot, you should usually choose Multishot instead.

This is the only item that falls in both the tool and weapon categories. Axes are the weapon of choice for many due to their ability to deal higher levels of damage.

This enchantment is the same as it is for swords and will increase the amount of damage dealt by an Axe.