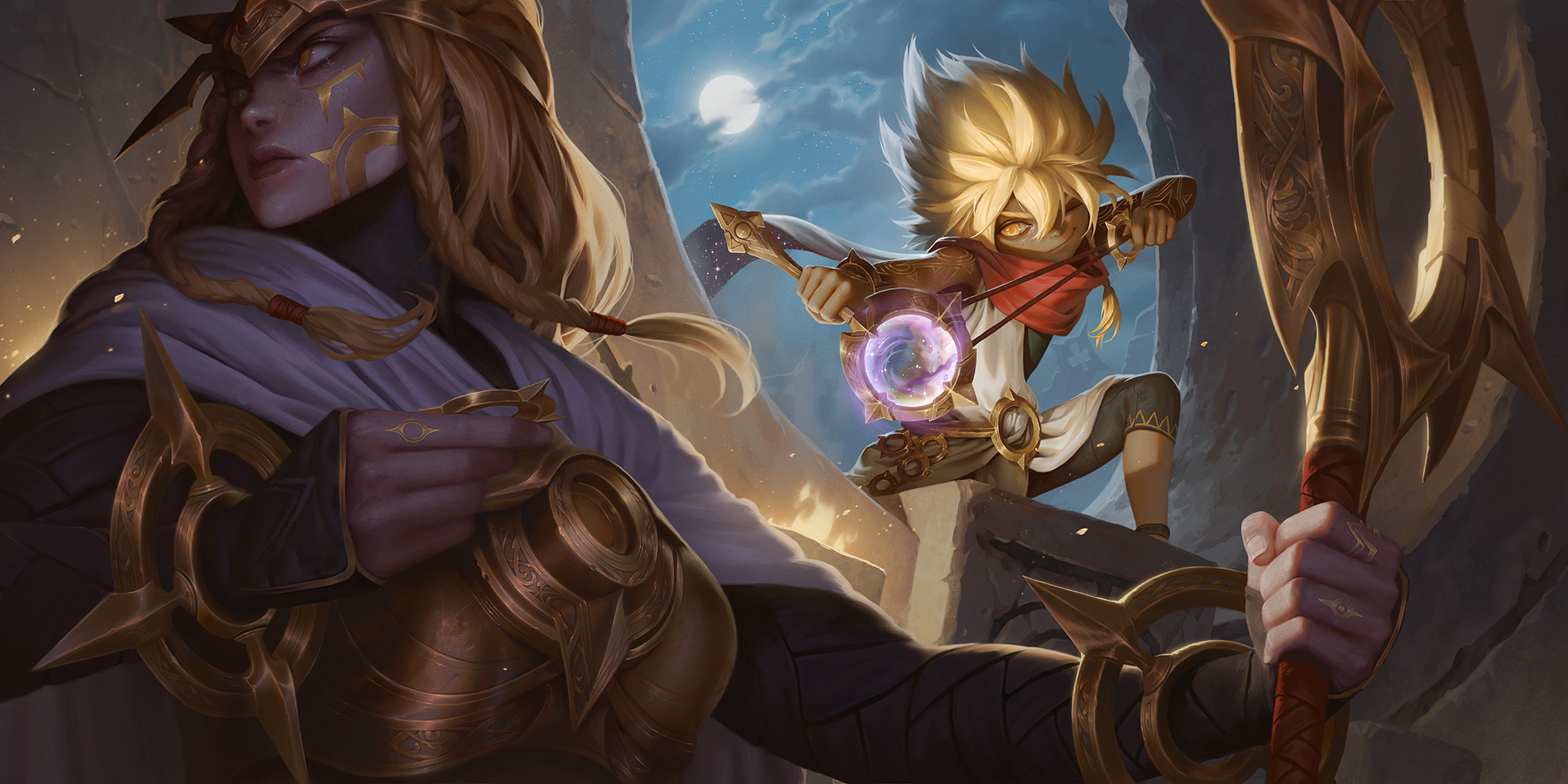 Legends of Runeterra: Cosmic Creations officially released yesterday. As the third and final expansion from the Call of the Mountain set, Cosmic Creations brings the last 40 new cards for the year and are available for players to collect. Since the latest expansion starts the next season to occur after the game’s first seasonal tournament, every player is looking for the next strongest cards that have been released.

This expansion’s main focus revolves around card generation, as all three champions introduced involve making cards in one form or another. In addition to this, each region now has an equal playing field in terms of the amount of cards each has. 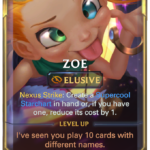 One-mana champions have historically struggled to find high and consistent spots on the ladder. While Teemo and Fizz both have niche high rolls decks (in the form of Sejuani aggro and Freljord spellcasting respectively), Zoe may have a chance to find a similar spot in the meta like her other cheap champion counterparts. Targon decks, when combined with Piltover and Zaun, have been recently rising in popularity as hyper-aggro decks thanks to the power of Spacey Sketcher with other discard synergies.

Zoe serves as another cheap one-drop that can elude most boards early on and provide more discard fodder with her Nexus Strike ability. While it is unlikely for Zoe to ever level up, the power of Zoe comes from the fact that opponents may disproportionately waste removal on her if she lives for too long.

As the poster child for the Cosmic Creations theme of creating cards, Viktor helps tie the expansion together in innovative ways. Previous cards that can garner specific value like Stalking Shadows and Fading Memories all contribute to assist Viktor in reaching success.

Viktor and his support cards that create cheap cards can either serve as fodder for Piltover and Zaun discard-based cards, or help Viktor proceed with leveling up. While base Viktor isn’t the strongest champion, reaching level two with Viktor can be somewhat expected at around turn seven or eight, and level-two Viktor is fairly threatening.

A one-mana discount on all created cards can lead to potent combos for midrange and controlling-style decks that create multiple cards on a whim, like Shadow Isles or Heimerdinger.

Braum and Vladimir-styled decks have always been in a weird fluctuation on the ladder. While Braum was most popular when he had one power, Vladimir has seen more experimentation thanks to his recent buff. With the power of The Scargrounds, Vladimir and Braum-styled decks will appreciate the new potential to make their units stronger.

While three mana is a difficult tempo investment to make for a faster deck like Noxus and Freljord scars, the payoff is powerful after each instance of combat. Thanks to the ability to gain Tough, it will be difficult for your units to be run over in future combats, and if you can land Tough on your units with Regeneration, then opponents will need to spend a ton of resources to destroy your units. This also doesn’t count the extra power they gain which improve their ability to trade with stronger enemies.

Control-styled decks have always been a fair share of the ladder and tournament metas. While a fast one-damage ping is far from being both the best or worst removal, Death Ray serves multiple roles thanks to its ability to scale over time.

Piltover and Zaun has been a powerful control region, especially when combined with either Shadow Isles or Targon. Death Ray can either be played in pure control decks that wish to grind opponents out with massive value or Viktor-focused decks since it serves as two creation credits on its own.

While Death Ray’s main weakness is that it dilutes future draws, if you are ahead, you are content with the extra removal that Death Ray can provide against early threats from your opponent.

Since these three cards are functionally similar, they deserve the same spot on the list. The Reforge mechanic is a powerful one that can slot into multiple strategies, and the cards you add to your deck from these three will depend on the style of Reforge you’re running.

If you’re more aggressive, Blade Squire and Runeweaver will be more your speed since they get on the board and provide tempo. If the list is more combo, spell-based, or combat-centric, then Weapon Hilt will be more favorable within your lists.

It will be fairly rare to find a Riven/Reforged deck that will run three copies of each Reforge support. But it is likely to build lists that will aim for four to seven copies of Reforge cards with an assorted combination based on what your deck is lacking.

Ever since its addition to the game, Targon has been an explosive region in terms of its viability and power thanks to its support style spells. While Targon is not known to have aggressive -based spells, Moonlight Affliction can give Targon the chance to surprise the opponents with a final push in the last turn due to its ability to remove opposing chump blockers.

Even if it isn’t used offensively to fish for lethal, the ability to temporarily silence two enemy units in a round of combat can turn the tables, especially when your opponent uses multiple combat tricks and other buffs.

Historically in card games, cards with variable-type effects that let you perform different actions have been powerful. Even though most cards where you choose one of many effects have to be slightly more expensive or weaker due to the amount of variety it brings, Aftershock serves as a card with three powerful modes.

For four mana, you can effectively use it to either remove a three-health unit, destroy a landmark from the opponent, or burn the opponent’s nexus directly. While all three options are high-priced for the mana cost, especially when on a Slow spell, it will be difficult to find a time when Aftershock is useless whenever you do draw it.

While Aftershock is unlikely to find success in aggro decks, it has a high chance of being utilized within slower Piltover and Zaun control decks. 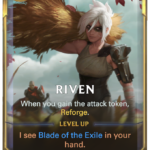 The popular League of Legends fighter champion has finally made her debut in LoR, and she plays out as a powerful supporting enabler for other archetypes. Since she Reforges every other turn, Riven provides a wealth of free value through cheap spells that can give you a starting edge when attacking and activate Nightfall fairly easily. Additionally you can use the materials gathered from Reforge as discard fodder if you build your decks in an aggressive manner.

The two main decks that Riven are most likely to succeed with will either be with Lee Sin as a replacement for Draven in Ionian and Noxus-based decks, or with Taric in a buff-styled Targon Noxus list. But due to Riven’s flexibility, she can find herself being a support or star in multiple deck ideas.

While leveling Riven will be difficult to do early, the threat of her reaching level two will always be a scary threat for your opponent whenever you float a ton of mana when you’re ready to attack.

Mentioned earlier on the list, Targon combined with Piltover and Zaun will become stronger this expansion, and Starry Scamp is the main piece binding the deck together. The “cheap” celestial archetype has always been a powerful support shell with Spacey Sketcher, but now that Starry Scamp has arrived, the build has a powerful payoff with a zero mana 2/2 unit.

The potential to high roll an opponent with multiple free 2/2 units will be difficult to overcome for most decks that aren’t control decks. When you combine Spacey Sketcher and multiple Starry Scamps with either Jury Rig or Flame Chompers, you create a hyper-aggressive curve that can end the game quickly the more lucky you are.

Demacia has always been the region that helped spawn most of the premier midrange decks for the ladder. From Bannerman to Scouts and even a few Dragon lists, Demacia has multiple tools to fight for the board. Ranger’s Resolve, Single Combat, and Riposte are examples of powerful options that can help Demacia in a pinch, The Grand Plaza is a consistent power boost that can spawn new styles of midrange.

A temporary +1/+1 stat buff and Challenger is a powerful combination of text that can help any aggressive list out. The more tokens you can produce and the wider you make your board, the more you can benefit from The Grand Plaza. If you go down the route of Shadow Isles, you can use Blighted Caretaker and The Undying to set up favorable trades. Thanks to The Grand Plaza, Shyvana and Dragons have a higher chance for viability since they can finally choose the trades they want.

The major downside when considering how to play The Grand Plaza is getting over the initial three-mana investment. While the payoff for playing The Grand Plaza is high, it will take some time to recoup the tempo that was lost when playing it as soon as turn three.

Collect these cards and try them for yourself as LoR: Cosmic Creations is officially live now on PC and Mobile.