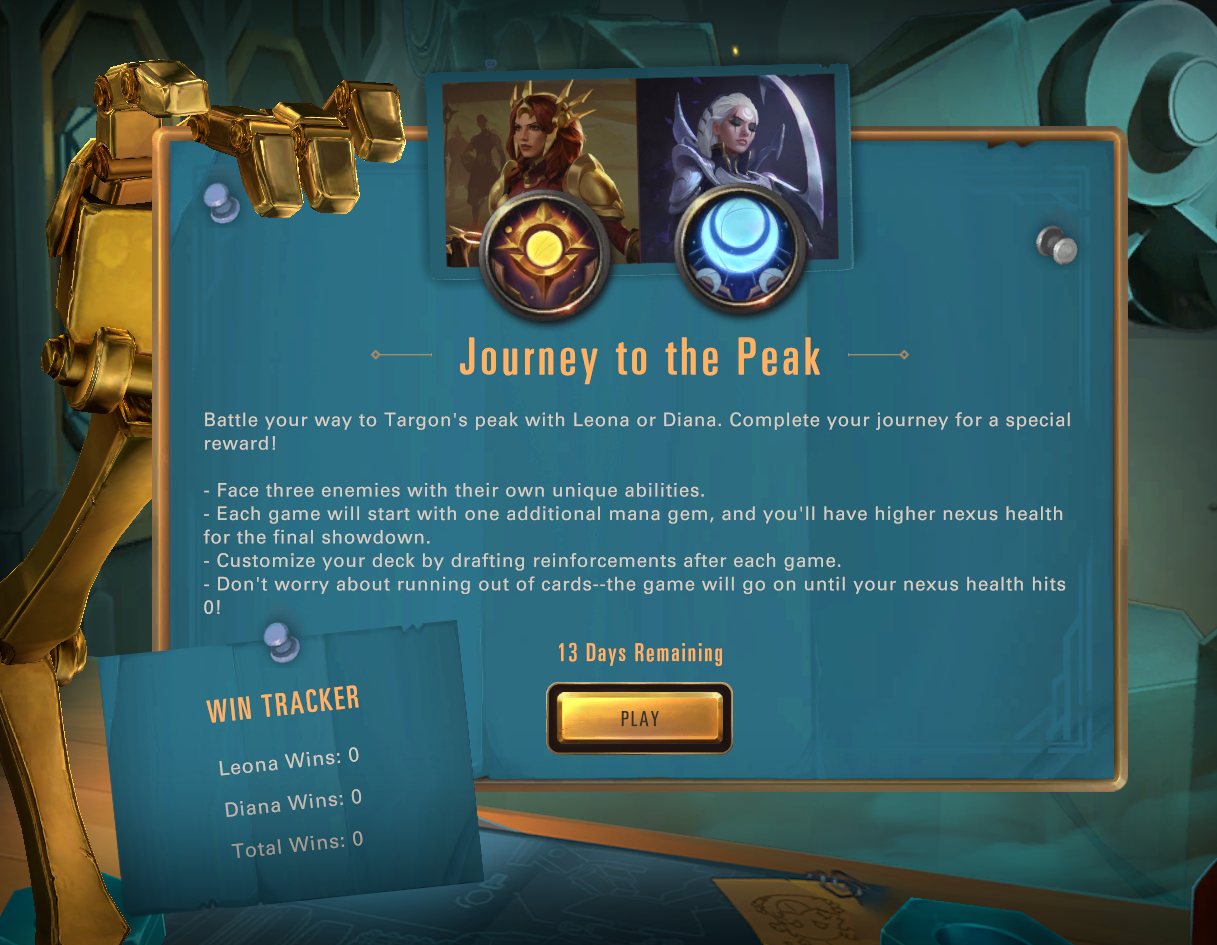 Every two weeks, Legends of Runeterra’s patches bring a new casual lab experiment for players to try out. Patch 1.11 brings the mode’s seventh lab, Journey to the Peak. This augmentation is the first single-player PvE experience and awards two icons for attaining ultimate victory.

How to win with Leona 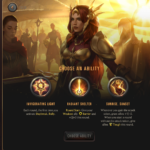 Leona’s three special abilities are Invigorating Light, Radiant Shelter, and Sunrise, Sunset. Invigorating Light grants you the ability to Rally the first time you Daybreak each round. Radiant Shelter, at the start of each round, gives your weakest ally Barrier and two extra power for the round. Sunrise, Sunset gives your allies one extra power when you begin a round with an attack token, and a temporary Tough keyword when you begin a round without one.

Out of these abilities, Invigorating Light is the strongest, an extra attack each round whenever you activate Daybreak leads to the opportunity to defeat your opponents quickly.

After defeating Lulu when given the choice of three packs, the Quinn pack is especially powerful due to the Genevieve at the top of the curve. If you can activate Daybreak with Genevieve on the board, you have the opportunity to perform three attacks in one turn with proper timing.

In the second pack of cards after defeating Trundle, the Miss Fortune pool of cards is a favored choice of the three. The reason for this is because the multiple attacks granted by Invigorating Light will help you level up Miss Fortunate fairly quick, racking up massive damage.

How to win with Diana 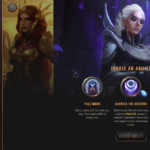 Diana’s three special abilities are Pale Moon, Harness the Heavens, and Mystic Moon. Pale Moon makes the first unit you play each round refund their mana cost to full. Harness the Heavens gives you a random Celestial card equal to your maximum mana the first time you Nightfall each turn. Mystic Moon restores your spell mana each time you activate Nightfall, and lets you draw a card the first time you use Nightfall for that round.

Out of these three abilities, Pale Moon and Mystic Moon are the most potent. With Pale Moon, getting a mana refund on your units lets you activate Nightfall much easier, letting you play your cards faster. With Mystic Moon, after you activate Nightfall, you retain your value by drawing cards and refilling spell mana, giving you a chance to chain more spells together.

When you defeat Lulu with Diana, picking the Nocturne pack will increase your consistency in activating Nightfall cards. Within the second pack of cards after defeating Trundle, going with Ezreal will allow you to play cheaper cards, which allows you to activate Nightfall much easier. 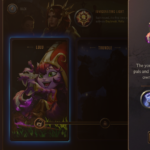 Your first opponent Lulu has standard game rules and uses the Ionian support cards introduced with Call of the Mountain. The easiest way to attain victory is to gain value trades against her board, and never allow her to begin a support chain.

If you can keep her unit count down, it will be difficult for her to use the power of her support cards like Fuzzy Caretaker and Young Witch. One card to look out for that Lulu has is Fae Guide, if she sticks a big minion, the Fae Guide can grant it Elusive, avoiding your board entirely.

As Leona, using cards like Solari Soldier and Shieldbearer will allow you to force combat early with your bonus stats. If you can keep the trades going it will be tough for Lulu to catch up.

With Diana, Lunari Duskbringer and Diana herself will allow you to trade with Quick Attack and Challenger due to the aggressive stats. Sometimes it is okay to forego activating Nightfall if it means keeping up on the board.

Compared to the Lulu fight, both players start with an extra mana. Trundle’s special ability also matters more here since a swing in four power is a lot more noticeable. The main concerning unit to look out for is Faces of the Old Ones, this is due to its ability to ramp out mana earlier and let Trundle summon himself quicker. Once Trundle summons himself, you must try to defeat him before he summons his Ice Pillar. If Trundle summons the Ice Pillar and levels up you will need to finish him off soon after otherwise he will deal massive damage in response.

Whenever Trundle’s units attack, it is best to take the damage if your key unit loses its power. Leveraging your health as a resource is a key to victory as either Leona or Diana. 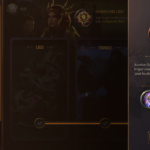 Similar to the Trundle fight, the battle with Aurelion Sol starts with increased mana at three, but also 30 Nexus health as opposed to the usual 20. Aurelion Sol’s ability which generates extra dragons whenever he summons one will outvalue you, so defeating him quickly is key to winning. Much like the Faces of the Old Ones in the Trundle encounter, Herald of Dragons is a key unit to destroy, if she survives on the board, Aurelion Sol can summon his dragons sooner than expected.

As Leona, hard mulliganing for Miss Fortune will grant you easy success since leveling her up is really easy due to Invigorating Light. With Diana, Ezreal and Diana both have the ability to take out Herald of the Dragons with Mystic Shots or Challenger.

Obtaining your spoils after victory 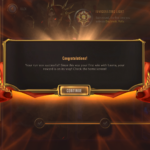 When you defeat Aurelion Sol with Leona or Diana, you can claim your Solari/Lunari-themed icon in the main menu in the loot tab. There is one icon to claim for both a Leona and Diana win, and claiming one does not exclude the other.

While some powers may feel stronger than others, each power and deck choice has the potential to climb the mountain and reach the top successfully.

Players have until LoR’s next patch to experiment with Journey to the Peak’s single player experience. LoR Patch 1.12 is set to go live two weeks from now, Oct. 14.