The reveal season for the Sentinels of Light event surprised the community yesterday with news that Akshan, League of Legends’ upcoming champion, is joining Legends of Runeterra too. And today, three more cards were shown off that are being added to Shurima to accompany the Shuriman champion, Akshan. 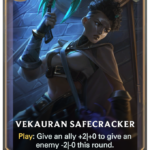 Vekauran Safecracker is a rare four-mana unit with 4/4 combat stats and a play ability that gives a temporary +2/+0 stat change to another allied unit to reduce the power of an enemy by two for the round.

Vekauran Bruiser is a common five-mana unit with 5/5 combat stats and a strike ability that creates a Lucky Find in hand. Lucky Finds are zero-mana Fleeting Focus speed spells that can be cast on any ally. Afterward, you pick between one of three options from the following to give as a permanent bonus to that ally:

Vekauran Vagabond is a common three-mana unit with 3/3 combat stats and an effect that triggers when she’s summoned that summons the uncollectible Countdown Landmark Warlord’s Palace to your side of the board. If you already control a palace, it’s advanced two rounds forward.

Out of these three cards, Vekauran Vagabond has the most direct synergy with Akshan due to her ability to summon a Warlord’s Palace. The ability to create more Palaces outside of Akshan increases your odds of being able to level him up before he’s drawn.

Outside of this direct synergy, the Vagabond has an average stat line for its cost and will help you contest the board against your opponent.

Vekauran Bruiser, while having subpar stats for his cost, does bring interesting utility to the table due to his ability to constantly generate Lucky Finds. Outside of being potential spell fodder for champions like Lee Sin, the fleeting spell finds new indirect synergy as a way to countdown the Warlord’s Palace much more quickly due to the allied targeting.

Vekauran Safecracker is similar to the Bruiser in that she can assist in advancing the uncollectible Palace and Hoard Landmarks since her ability targets an ally. Safecracker’s effect is comparable to Freljord’s Troll Chant due to how many stats it can swing for combat. The major downside to Vekauran Safecracker is that her effect is at a slower speed, so you can’t surprise an opponent similar to how you could with Troll Chant.

Despite this weakness, Shurima is filled with multiple Vulnerable-granting abilities, which means you can find many ways to set up favorable trades to your advantage before Safecracker’s ability fades away.

Try out these cards and more when LoR’s next event is released on July 14.