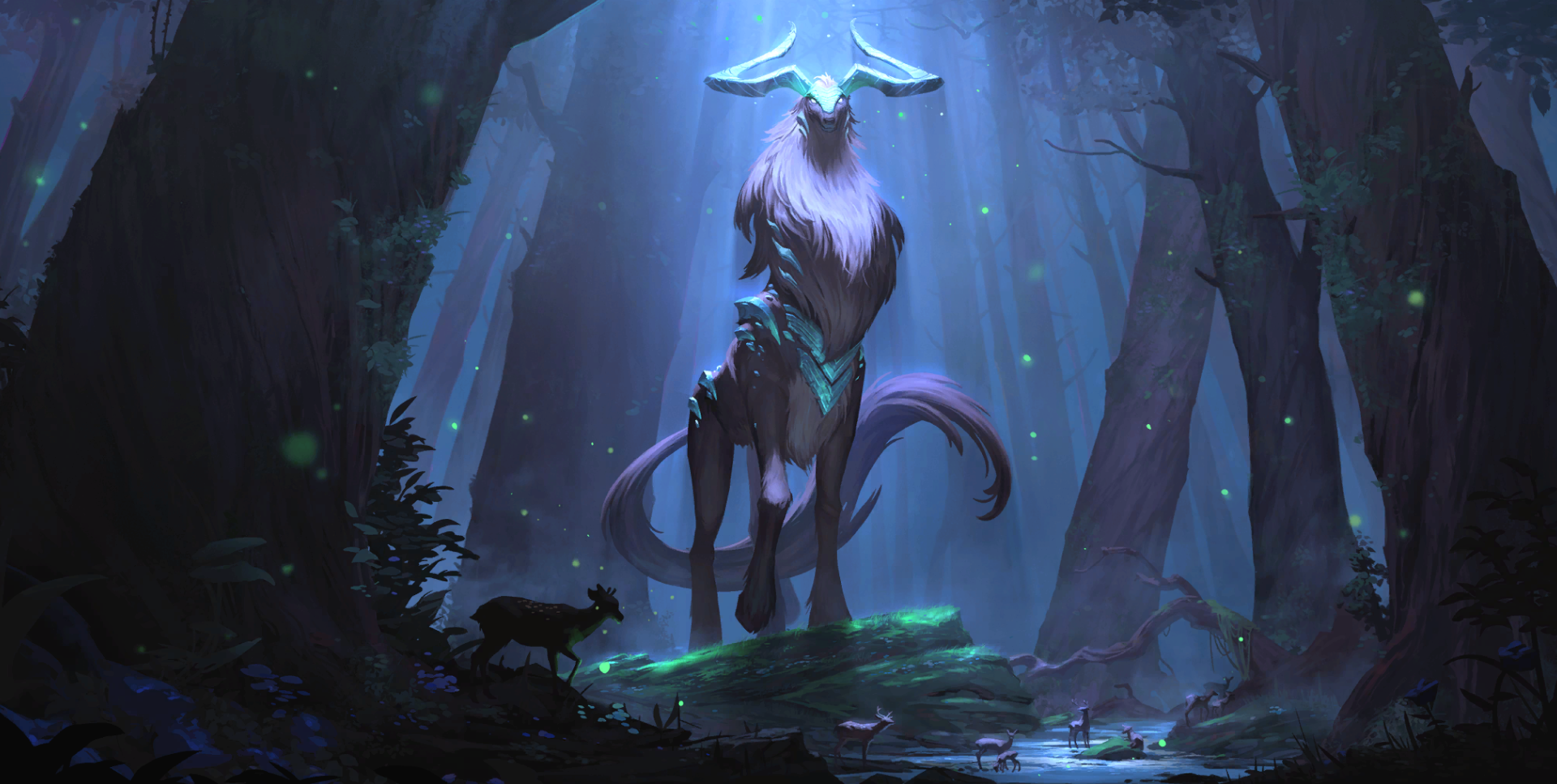 Riot Games is taking a break from revealing champions for Legends of Runeterra’s next expansion, Empires of the Ascended, since there are only three left to be revealed.

But today, Riot showed off 17 new collectible cards that every non-Shuriman region will get to enjoy: 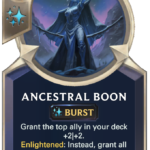 Destiny’s Call is an Epic eight-mana Targon Burst spell that grants an allied unit in hand +8/+8.

This card can allow you to set up a potential combo turn in the future by giving you the chance to spend buff mana earlier than usual. While spending your mana to consolidate power onto one card can be risky, Targon does have multiple units within the region that have Spellshield, letting this be a potentially safer option than other buff cards.

In addition, Destiny’s Call has inherent synergy with cards like Silverwing Vanguard that duplicate themselves when summoned.

Startipped Peak is a Rare two-mana Targon Landmark that has a Countdown of two, which will give you two random Celestial cards that cost three or less mana once the timer runs out.

While Celestials have a higher power level than your average card, the fact that you must wait two turns before receiving them, in addition to getting random ones, makes this card risky at best. This card does have the chance at making an appearance in Stoneweaving, though, if you have two remaining mana.

Lost Riches is a Rare four-mana Burst spell from Bilgewater that draws a Treasure that lurks in your deck. If there are no Treasure cards to be found within your deck, then Lost Riches will create two copies.

Right now, only Shipwreck Hoarder and Lost Riches are cards that are able to produce Treasures. While Treasures are potent cards, their abilities and effectiveness are too varied to spend six card slots to consistently draw them with Lost Riches.

Loaded Dice is an Epic four-mana Bilgewater Slow spell that has you nab a card from the opposing deck each time you deal damage to the enemy Nexus for the rest of the round.

While Loaded Dice has the potential to draw multiple cards from your opponent’s deck, your opponent may spend more time defending their Nexus during combat the turn you play this. This means that to get as much value as possible, you may want to use effect damage from cards like Powder Monkey, Warning Shot, or Sleep with the Fishes.

Shadow Apprentice is a Common one-mana 1/1 Elusive unit from Ionia that has a summon ability that grants him a permanent +1/+1 stat buff if he sees an allied unit with Ephemeral.

While a one-mana 2/2 unit with Elusive is a powerful payoff for the cost, there are no top-tier Ionian decks that provide Ephemeral units at a non-attacking speed. Shadow Apprentice has a chance to make a hyper-aggressive Ephemeral list viable with cards like Shadow Fiend and Silent Shadowseer, but that deck has a good chance of running out of value and steam at an extreme rate.

Field Musicians is an Epic four-mana 1/4 unit from Ionia with Attune that refills your spell mana and draws you one card the first time you summon three other units in a round.

While summoning multiple units by round five can be a difficult task, Eye of the Dragon has the potential to do that thanks to the Dragonlings that she can spawn. In addition, self-recall cards like Navori Conspirator can help achieve this effect of mass summons each turn.

Production Surge is a Rare zero-mana Piltover and Zaun Slow spell that has you spend all of your mana to play it. Once you activate this card, you summon random Heimerdinger turrets where their total costs equal the mana spent.

Since Production Surge doesn’t specify how many units it summons for the mana spent, it’ll be difficult to get specific turrets from this card. But while Production Surge may seem like a random card not worth the effort, it has a chance to instantly level up Heimerdinger if you manage to spend six mana on it.

Concurrent Timelines is an Epic one-mana Piltover and Zaun Slow spell that alters your gameplay for the rest of the match. The first time you’d play a unit each round, you’re given the choice of three units to transform your summoned unit into.

This effect is difficult to evaluate since the results are too varied and random. While it’d be wonderful to transform into units with negative summon abilities, like Hunting Fleet, the likelihood of this isn’t favorable. Depending on how skills and this transformation are ordered, this effect could have the potential to end the game on the spot if you play a Commander Ledros and manage to turn him into The Dreadway.

Crimson Bloodletter is a Common one-mana 1/2 unit from Noxus that deals one damage to the next unit you play and grants itself +1/+1 after you manage to do so.

As its name implies, this card has fantastic synergy with Crimson cards since the one damage ping will allow you to trigger their abilities. While Crimson-style decks have yet to be a dominant force on the ladder, a one drop that can become a 2/3 unit has the potential to add consistency to the popular archetype.

Strength in Numbers is a Common eight-mana Noxus spell that summons two Legion Marauders. The Legion Marauders that are summoned from Strength in Numbers will receive bonuses from any previous Marauder attacks. This strategy is inconsistent, though, since it relies on going first to get the snowball effect going. In addition, if you’re unable to play any Legion Marauders earlier in the game, you’re effectively summoning 6/4 worth of stats split across two bodies, which is inefficient.

Shrieking Spider is a Rare four-mana 2/5 Noxus Spider unit that grants all of your Spider allies, including itself, a permanent +1/+0 buff after it declares an attack.

As a Spider with a sizable health total, Shrieking Spider has the potential to be a newer payoff for your wider boards that can activate multiple times. While most viable Spider strategies center around Elise for having many Spiders on board, Shrieking Spider can serve as an alternative to the champion from the Shadow Isles.

Soulspinner is a Common three-mana 3/2 Spider unit from the Shadow Isles that’s granted a permanent +1/+1 stat boost and Fearsome if an ally died earlier that round. For Soulspinner to reach a viable statline, you need to guarantee an ally dies for this effect to make it a terrifying unit for your opponent.

Soulspinner is in direct competition with Frenzied Skitterer as a Spider payoff card at three mana. While the Skitterer succeeds in wider boards, Soulspinner draws all of the power to itself.

Sea Scarab is a Common two-mana 1/2 Sea Monster unit from the Shadow Isles with the Deep keyword and an ability that tosses one card if itself or another allied unit dies.

As the cheapest Sea Monster, the Scarab brings a new viable tool to Sea Monsters by getting the Deep buff onto the board much sooner. It also has the ability to accelerate your deck to be at 15 cards or less due to its constant chance to toss your own deck.

Dragon Chow is a Common one-mana 0/3 unit from Demacia that has a Dragon strike it and draws you a card after you play one from your hand. Aside from providing deck thinning, Dragon Chow can help activate Fury on your Dragons and improve the rate of Shyvana leveling up. In addition, Dragon Chow can potentially heal you for two health if you use it to block early aggressive units that your opponent summons.

Ancestral Boon is a Common two-mana Burst spell from Freljord that grants the top ally of your deck +2/+2. This boost is extended to your entire deck if you’re Enlightened.

While Ancestral Boon has the chance to provide immense value by bolstering your entire deck, this bonus is only active once you reach 10 mana. This means that you’re less likely to find the optimal use for this card since this occurs later in the game.

Spoils of War is a Common three-mana Burst spell from Freljord that grants the unit on top of your deck +1/+2. This stat increase is improved to +2/+4 if you Plundered earlier in the turn.

Since you’re mainly buffing the next unit you draw in your deck with an extra 2/4 worth of stats, it’ll be difficult to control the effectiveness of this card. In addition, you’re paying three mana to effectively do nothing until you draw the unit you buffed. There’s a fair chance you’re losing out on tempo for a long time if you activate this card.