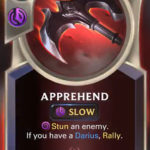 The reveal season for Legends of Runeterra’s second expansion, Call of the Mountain, is officially concluding with a massive final reveal.

Jack, the Winner is an epic five-mana 5/6 Bilgewater unit that creates a Fleeting Sleep with the Fishes in your hand. Sleep with the Fishes is a zero-mana Slow spell that lets you deal two damage to an ally to deal two to the enemy Nexus. Monkey Business is a common two-mana Slow Bilgewater spell that summons a Powder Monkey. It also has a Plunder ability that summons an extra Powder Monkey the following round. For the Fallen is an epic eight-mana Slow Demacian spell that reduces its cost by one whenever you summon an Elite. Whenever you cast it, it summons a 3/3 Dauntless Vanguard for each ally that died this turn. Singular Will is a 10-mana Slow Ionian spell that has you select an allied unit and Recall every other unit on the board.

Basilisk Bloodseeker is an epic seven-mana 7/4 Noxian unit with Overwhelm and a Skill that deals one damage to an allied unit and an enemy unit four times. Apprehend is a rare two-mana Slow spell that stuns an enemy unit. It also has a bonus Rally effect if you control a Darius. Tri-Beam Improbulator is a four-mana epic Slow spell that deals one damage to an enemy and summons a random one-cost unit. While it’s in hand, both damage and unit cost increase by one whenever you play a three-mana card.

Star Shepherd is a rare one-mana 0/3 Targon unit that gains a permanent +2/+0 stat buff whenever you heal a damaged ally. Fledgling Stellacorn is a common three-mana 1/2 Targon unit with both Lifesteal and SpellShield. Giddy Sparkleologist is a three-mana 2/2 Targon unit that has a Behold ability when played that grants an ally a permanent +1/+1 stat boost and Spellshield as long as you either have a Celestial in hand or play. Grandfather Rumul is a rare eight-mana 8/4 Targon unit with Overwhelm, Spellshield, and a play ability that gives an ally a permanent +0/+4 buff. Lastly, Porofly is a common one-mana 1/1 Poro unit from Targon that has the Spellshield keyword. 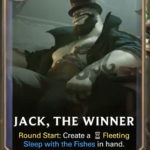 Jack, the Winner on his own is a unit with fair stats for his cost. The constant Sleep with the Fishes allows you to trade unit health for Nexus damage, granting easy access to Plunder triggers. Much like Noxian Fervor, you can interrupt this damage if you destroy the unit during the cast time.

For the Fallen is another card that pushes the Elite Demacian strategy. This spell serves as insurance against board wipe clearing cards or a way to refuel after trading your units away. While 3/3 units aren’t anything to write home about, the potential turn they can provide on open attack can be surprising to unsuspecting opponents who used many resources to clear your board.

Singular Will has a Solitary Monk reference in its art. Fittingly, just like her effect, the ability to Recall every unit can lead to a surprising board swing in your favor. When used on a leveled up Yasuo, it can oftentimes just destroy every unit thrown back. If your opponent’s hand is nearly full and their board is full as well, the excess units will be destroyed due to the maximum hand size.

Basilisk Bloodseeker is a powerful way to sacrifice your weaker units to clear away stronger opposing units. It also provides a lot of credit toward leveling up Swain if you don’t have him leveled yet.

Apprehend is a flavorful reference to Darius. If you have two spell mana saved up on the turn you swing with Darius, this spell can give you an astonishing finish against an off guard opponent.

Tri-Beam Improbulator is a weird-looking card at first, but the value it can obtain over time is powerful if you build it up properly. If you’ve played four three-mana cards while it’s in your hand, it becomes a strictly better Thermogenic Beam.

Star Shepherd at first glance looks underwhelming, but it does have a bit of synergy with the Gem-focused cards revealed earlier this month. Star Shepherd also has potential synergy with a future Soraka release, whether she comes during the second or final third of Call of the Mountain.

Fledgling Stellacorn is a unit for its cost, but its keyword makes it a pesky nuisance for opponents to deal with if they don’t have many units. Fledgling Stellacorn can serve as an annoying little mosquito that grants you a bit of life while being evasive against opposing abilities.

Giddy Sparkleologist is a card that builds on the Invoke mechanic. She gives your units extra stats and a bonus Spellshield as long as you’re holding a Celestial creature. Oftentimes, your cards with Invoke are weak in stats, so Giddy Sparkleologist gives you a chance to catch up on the board.

Grandfather Rumul is a large unit that also makes your fellow units bulky. It’s 7/4 and Overwhelm stats make it a powerful finisher in a limited format due to the Spellshield that’s also tacked onto it.

No region is complete without a Poro, though. Porofly is Targon’s Poro representative, which has Spellshield. When combined with Heart of the Fluft, it can give you a large Poro that will evade annoying effects from opponents.

These cards and more will become available when LoR: Call of the Mountain is officially released tomorrow, Aug. 26.