Yordles have taken over the League of Legends merch store 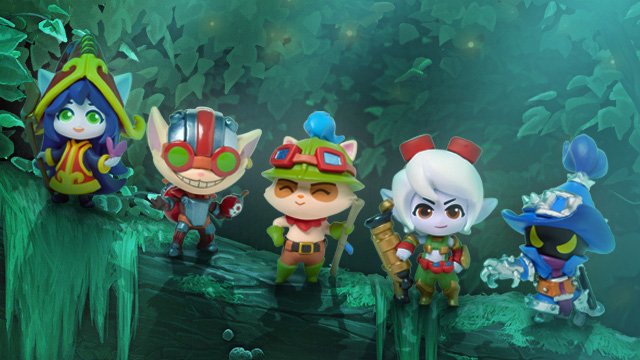 Riot Games added a new set of mini figures, a Beemo onesie, and more to the League of Legends merch store today to celebrate the game’s littlest legends.

Fans can now pick up the newest Yordle-themed set of team minis, which comes with three-inch figurines of Lulu, Ziggs, Teemo, Veigar, and Tristana, for $35. Additionally, the full-sized Dragon Trainer Tristana figure has returned from the vault to celebrate the Yordle’s takeover of the merch store and will remain available for purchase for a limited time.

Beemo is getting his chance to shine in this store update. Fans can snag a new Beemo onesie, a one-size-fits-all outfit featuring Beemo’s signature honey stick, wings and antennae, and a detachable fur neck for $75. Additionally, Riot has added both a 10-inch plushie depicting the Swift Scout in his bee-themed outfit and a unisex Beemo pocket T-shirt for $30 each.

The League developer also released a Teemo collectible plushie and a new line of poro mini plushies styled after the Omega Squad skin line. Costing $35, the set comes with five poros, each dressed up as a different member of the Omega Squad.

Not a fan of Yordles? No problem. Riot added a special mini figurine perfect for those who loathe one particular scout. Standing just over two inches tall, the RIP Teemo mini figure features the marksman plopped on the ground with a bruised eye and a disheveled look.

Fans can check out all of the new merch in the League online store.