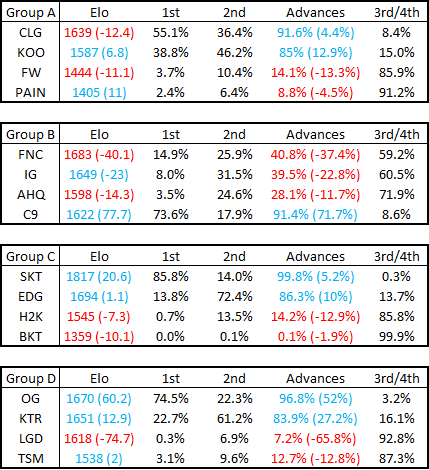 The Worlds Group Stage is half over and surprises abounded. Here are the updated odds of each team advancing to the quarterfinals.

The three teams on 3-0 are all nearly locks to advance, but there’s still a non-trivial chance that any but SKT could be denied. On the flip-side, both LGD and PAIN are going to have a very difficult time getting out of groups, but only the Bangkok Titans can be discounted entirely.

The biggest over-performers are, unsurprisingly, C9 and Origen; LGD are the worst under-performers. Despite a general narrative of unpredictability every other team is doing about as well as the Elo ratings predicted.

Here are the current overall standings:

A brief explanation of the methodology can be found here.